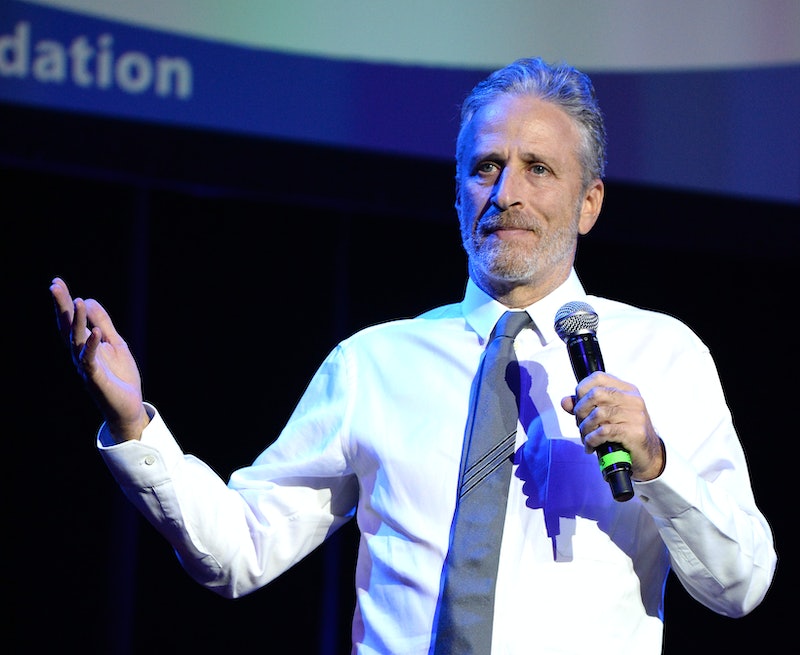 During an interview with Charlie Rose on CBS' This Morning, which aired Thursday morning, Jon Stewart said our country is the same as it was before Donald Trump became our president-elect. While the former host of The Daily Show lamented our country's new position with Trump soon to be our commander in chief, he also tried to be comforting, saying, "I don't believe we are a fundamentally different country today than we were two weeks ago." Unfortunately, I believe that sameness is precisely our current problem.

In the interview with Rose, Stewart played (for humor) the part of a surprised man, unaware there was an election in the first place before giving his take on our current political landscape:

Here's what I would honestly say: I don't believe we are a fundamentally different country today than we were two weeks ago. The same country with all its grace and flaws and volatility and insecurity and strength and resilience exists today as existed two weeks ago. The same country that elected Donald Trump elected Barack Obama. I feel badly for the people for whom this election will mean more uncertainty and insecurity. But I also feel like this fight has never been easy.

Certainly, Stewart made sure to point out the widespread hypocrisy in America, particularly among his liberal counterparts, saying that the ways liberals talk about conservatives is largely unproductive and hypocritical. Specifically, Stewart said:

In the liberal community, you hate the idea of creating people as a monolith. "Don’t look at Muslims like a monolith. They are individuals, and it would be ignorant." But everybody who voted for Trump is a monolith — is a racist. That hypocrisy is also real in our country.

He went on to point out that Trump's victory reflects issues of inequality that are inextricably woven into our country. A beleaguered Stewart said that Trump's win reflected a kick-back against the institutions of both the Republican and Democratic parties, despite the fact that Republicans will largely benefit from a Trump presidency:

Donald Trump is a reaction not just to Democrats, but also to Republicans. He’s not a Republican. He’s a repudiation of Republicans. But they will reap the benefit of his victory — in all their cynicism.

However, the fact is that Stewart is right about the United States being the "same country with all its grace and flaws and volatility and insecurity and strength and resilience" isn't as comforting to me as it should be. It reminds me that our country has held onto policies of discrimination against Muslims, women, the LGBT community, and all POC for decades, well before Trump came on the scene — and we are still that country.

It's almost wholly certain that, as with Obama, under a Clinton administration, there would have still been issues of racial discrimination and police brutality, an ongoing fight for state abortion rights, and the slow and steady fight against the persistent institutionalized and social homophobia that threatens the LGBT community. This is just the tip of the iceberg.

I do have hope that our country will not remain the same — in a good way. A silver lining of the Trump election is it has galvanized disappointed Americans to take action, with both protests and donations. For example, Planned Parenthood has seen a dramatic increase in donations since Election Day. However, in a perfect (or just better) world we wouldn't need a threat like President Donald Trump to take action.