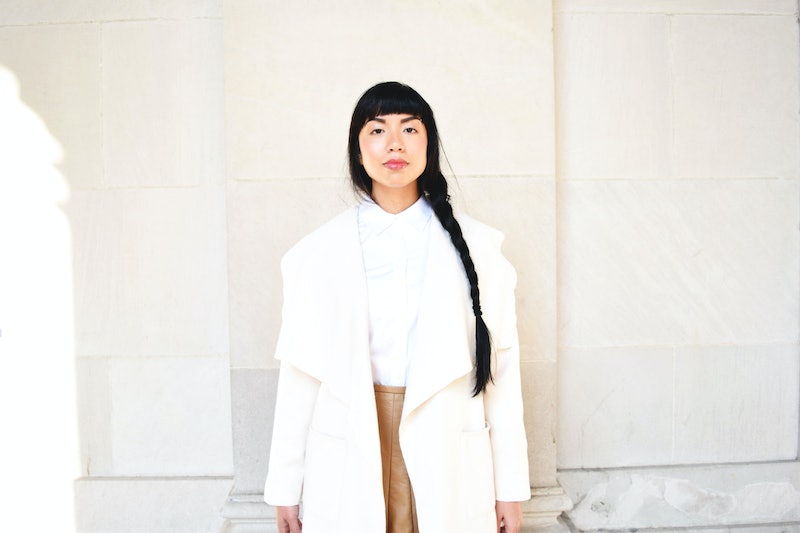 Two days after the election, my Uber driver initiated the typical small talk.

“How are you doing?”

At first, I didn’t quite hear him. I haven’t been fully present since election night. I wander in and out of awareness — floating from one out-of-body experience to the next. It’s hard to be present when everything instantly loses its vibrancy, when the world fades from Technicolor to dystopian black and white overnight, as you’re faced with the stark realization that millions of your countrymen disregarded a presidential candidate's messages of hate so that they could get to work on, supposedly, tearing down the political establishment.

Silence for a moment. And then, my driver responded, “We all should be.”

No need to dive into specifics or analysis. We knew what the other was talking about.

I keep hearing that now is the time to unite. Everyone is already tired of the protests, rants, and think pieces; it’s time to come together. The election is over, Hillary lost, and I need to shut up, get over it, and move on. In the minds of many, I’ve been relegated to the one-dimensional status of "sore loser."

But it’s so much bigger than that.

It's been said that the only thing necessary for the triumph of evil is that good men (and, I'll add, women) do nothing. Staying silent is doing nothing. Staying silent is sanctioning and normalizing that which should never be sanctioned or normalized. In just the few weeks that have passed since the election, Trump has already agreed to a $25 million settlement in a fraud case, met privately with media personalities and executives to criticize their campaign coverage, picked fights with the casts of Hamilton and Saturday Night Live, and falsely claimed to have kept a Ford factory in the United States after it had considered moving abroad. And that isn't even touching on his questionable ties to Russia or business dealings that seem to be a huge conflict of interest.

None of this is normal. But if we stay silent, it seems like we think it is.

If literally any other candidate had been elected — including those with whom I disagree on virtually every single issue — this essay wouldn’t exist, because I wouldn’t feel this unsafe. Mitt Romney? Sign me up. John McCain? War hero, awesome. George W. Bush? Well, although I vehemently opposed many of his policies, I think he had some redeeming qualities: He helped save millions of lives from AIDS in Africa and actually had a role in getting global leadership to take climate change seriously. Trump, on the other hand, spent five years implying that President Obama wasn't born in the United States and thinks that climate change is a hoax created by China. Saying that Trump won’t be “as bad” as Bush is, to me, a disservice to the former president.

Don’t tell me that everything will be OK. You don’t know that. No one knows that.

What I can’t quite get over, though, is the overflow of hypocrisy coming from those who criticize people for mourning a Trump presidency. A number of Republican commentators, in particular, somehow have the audacity to tell me to accept this outcome and stop complaining. Apparently we're all "idiots" and "precious snowflakes" for being discouraged and unsettled. And yet, these are some of the exact same people who have spent eight entire years continuously lambasting and disrespecting President Obama, as well as actively working to delegitimize him and his presidency.

Shortly after Obama's election in 2008, Sen. Mitch McConnell (R-KY) said it was the GOP's "top political priority" to ensure that he would be a one-term president — rather than making jobs, passing healthcare reform, funding veterans’ benefits, or any of the other issues he and others claimed to care about so much.

I believe McConnell’s mandate — whether or not he ever admits it — was rooted in racism. Many of his constituents have a problem with a black man occupying the Oval Office, and they haven’t been shy about expressing their feelings. Trump capitalized on this hate by sparking the birther conspiracy, which was 100 percent about questioning Obama’s Americanness — because many people believe that if you’re a person of color in this country, your origin story must be suspicious in some way. It only took Trump five years to “uncover” what the vast majority of us already knew: Obama was born in the United States and is, thus, completely eligible and qualified to serve as president.

As for Trump? Well, I guess he’s got the eligible part down.

Of course, the damage has long been done. As others have postulated, I believe we are witnessing the whitelash, although many Trump supporters take offense to this theory. It wasn't about him, they say; it was about turning the system upside down. It was about rejecting political dynasties like the Clintons and Bushes in favor of a true man of the people — someone who understands the plight of the working class, as only one could from his (literal) gold-encrusted throne on Fifth Avenue. (I guess non-political dynasties like the Trumps aren't a cause for concern.)

But really, if it were about disrupting the system, wouldn’t it have made more sense to vote against the two-party system entirely? I'd much rather be saying "President-elect Johnson/Stein" right now than "President-elect Trump."

And now, it appears that Trump’s team will be chock-full of Washington insiders — the very people his supporters entrusted him to get rid of, proving that a vote for Trump did not end up being about taking down the system.

It’s a privilege to even be able to think that way — to be able to look past Trump’s discriminatory rhetoric (and actions) and actually consider him a viable candidate because his hate isn’t directed at you.

I am Mexican-American. I am Asian-American. I am a woman. My parents are immigrants. My partner is black. My friends are gay. This isn’t just a case of being a sore loser or wishing my team had won — it’s my livelihood, my sense of safety, my well-being, and my world that are at risk.

This is personal because Trump and his campaign made it personal.

But for me, hate is very much a deal breaker. I can overlook differing political and ideological beliefs. I can handle calling a Republican my president, even if we don’t see eye to eye on anything. I can empathize with people who have lost their jobs and don’t know how they’re going to make rent. I can understand being fed up with the status quo and wanting radical change.

What I can’t make peace with is hate. Hate is not something to be overlooked, handled, empathized with, or understood. Hate must find no refuge. Hate must be quelled. Hate must be fought.

How do I fight? With the best weapon in my arsenal: my voice.

So don't tell me when to stop expressing my thoughts on the outcome of this election. Don’t tell me that racism is irrelevant when the KKK plans to host a parade celebrating Trump’s win, and when we have an elected official calling our beautiful, classy, and intelligent First Lady an “ape in heels.”

Don’t tell me that everything will be OK. You don’t know that. No one knows that. Indifference and shoulder shrugs are what got us here in the first place. Writing off Trump as nothing more than a change agent is reckless and, quite frankly, offensive to the millions of people whose lives will be affected and altered under his presidency — and not for the better.

Don't tell me that now is the time for unity when much of the country has refused — and still refuses — to unite behind our current president. Unity is a two-way street. It must be given in order to be received.

Where was the unity when Trump’s supporters were shouting “build that wall”? Where were their calls for true immigration reform that could actually address the issue of illegal immigration, as opposed to Band-Aid solutions like a wall that will never get built? Where was their effort to understand the hopes and fears of a DREAMer whose only home has ever been here in the United States?

Demanding unity under the umbrella of hate is a farce. There can be no unity when those who seek it are the same people who have thrown it in the trash. Calling for unity now feels like a mechanism for silencing those who have legitimate reasons to be afraid, mournful, and upset about a Trump presidency.

Now, more than ever, my voice must be heard. To be silent is to be acceptant, and I will never accept such a hateful, bigoted, narcissistic, misogynist, and — least of all — unqualified person as my president. Some may say that makes me unpatriotic. But dissidence is not the opposite of patriotism. Being vocal about a truly unprecedented moment in our nation’s history is more indicative of love of country than it is of anything else. And when you or I speak up, it isn't just on our own behalf. These words are also on behalf of the voiceless, those who may feel they cannot speak up — from the sexual assault survivor who never received justice to the American child whose parents face deportation to the Muslim woman who quietly debates whether to wear the hijab in public.

More like this
UK Black Pride 2022 Just Broke A Major Record
By Sam Ramsden
Charlene White & MPs Lead Tributes For Bristol Bus Boycott Organiser Roy Hackett
By Sam Ramsden
Christina Aguilera Took A Powerful Stand At Brighton Pride
By Sam Ramsden
The Best Time To Date After A Breakup, According To Experts
By Bustle Editors
Get Even More From Bustle — Sign Up For The Newsletter