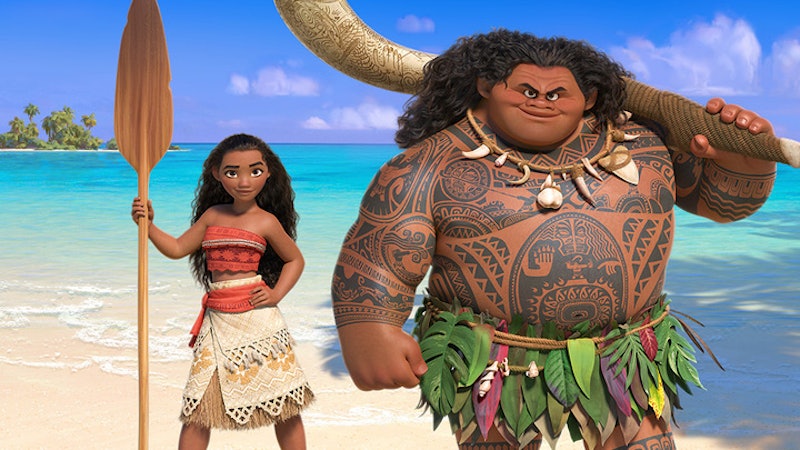 Disney's new animated film Moana is an exciting step forward for the company, as it not only features a heroine who doesn't have a love interest, but also takes a dedicated approach to depicting its heroine's culture with accuracy and respect. The film introduces viewers to a number of the awesome traditions and rich historical details of Polynesian culture, including one concept that plays a crucial role in the plot of the film. The movie's titular heroine Moana (voiced beautifully by Native Hawaiian Auli'i Cravalho) uses wayfinding techniques that she learns from demigod Maui (voiced by Dwayne "The Rock" Johnson) to navigate a vast ocean in order to save her people. The art of wayfinding is an important part of Moana, but, for those who aren't familiar with its use in Moana, what is wayfinding, exactly?

Wayfinding is the ancient Polynesian practice of navigating the open oceans using deep knowledge and intense observation of the celestial bodies in the sky and the swells of the water. An article in National Geographic describes how, over 3,000 years ago, ancient Polynesians sailed thousands of miles across the Pacific, discovering and colonizing hundreds of the Pacific Islands, including Fiji, Tonga, and Samoa. In A.D. 800, they expanded further, discovering and settling on, among others, Tahiti, Bora Bora, the Marquesas, Easter Island, and Hawaii.

The remarkable travel and navigation feats of these ancient pioneers was accomplished using the complex wayfinding techniques that they developed. The writings of Nainoa Thompson, a wayfinding scholar, navigator, and the president of the Polynesian Voyaging Society, describe how ancient Polynesian travelers read the stars, the sun, and the ocean's swells like a map. Thompson, who has been leading a revival of ancient wayfinding techniques for the past several years, provides detailed descriotions and charts of the celestial compass that navigators make use of during wayfinding. "We have Hawaiian names for the houses of the stars – the place where they come out of the ocean and go back into the ocean," Thompson wrote. "If you can identify the stars as they rise and set, and if you have memorized where they rise and set, you can find your direction."

This is the wayfinding art that Maui teaches Moana in the film. Fortunately, to ensure respect and authenticity, the development of Moana, as reported by Vanity Fair, was guided by substantial input from a group of native Pacific Islanders made up of "anthropologists, cultural practitioners, historians, linguists, and choreographers from islands including Samoa, Tahiti, Mo’orea, and Fiji." This group became known as The Oceanic Trust, and the Trust provided feedback, guidance, and criticism to the filmmakers in order to make sure that the movie's portrayals of Polynesian culture — including wayfinding — were accurate.

So it seems that Moana, in addition to being a heartwarming and feminist tale, provides an important opportunity for curious and unfamiliar viewers to begin their education about the talented, pioneering, and often under-celebrated navigators of ancient Polynesia.

More like this
A 'Bridgerton' Star Just Dropped A Major Hint About Joining The Live-Action Barbie Cast
By Bustle UK
What Makes A Sally Rooney Sex Scene So Hot?
By Samantha Leach
Here’s Everything Coming To & Leaving Netflix In June
By Alyssa Lapid
10 Must-Read New Books Out This Week
By K.W. Colyard
Get Even More From Bustle — Sign Up For The Newsletter