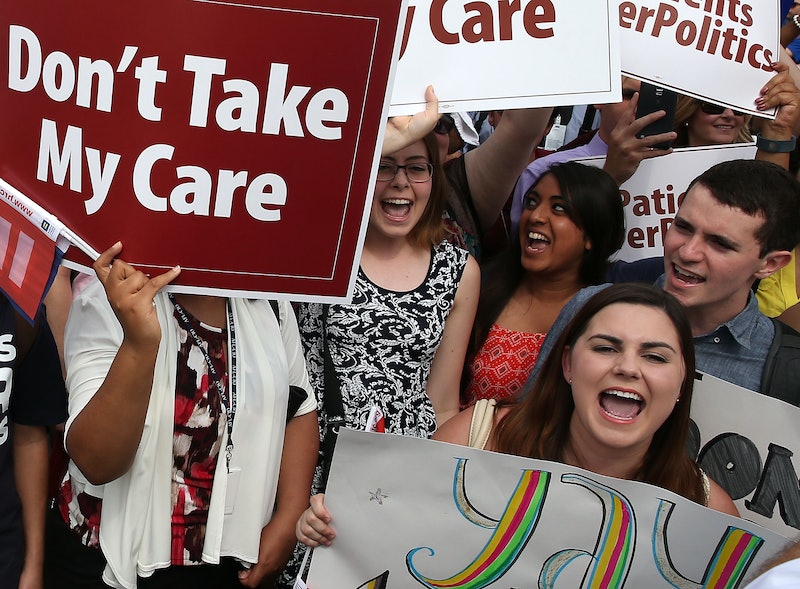 With President Obama's last term winding down and an upcoming Republican majority in the House and Senate cemented for next year, GOP leaders want to repeal Obamacare as soon as they can. Republicans in Congress have long hated the Affordable Care Act, which has brought health insurance coverage to 20 million people since it was signed into law six years ago. But since repealing and replacing it was a cornerstone of President-Elect Trump's campaign, the chances of Obamacare going away are now higher than ever. And there are many ways you can contact your local representatives to stop this.

Rest assured it might not disappear completely. After meeting with Obama, Trump said he would be open to keeping parts of Obamacare, including the one that allows Americans up to age 26 to stay on their parents' insurance. However, as The Hill reports, Republicans are divided on which parts of the act need to be preserved and which ones do not. Additionally, agreeing on the plan that will take its place may prove to be a long time in the making.

The new Congress is set to meet for the first time on Jan. 17, and no doubt one of the items of business will involve some discussion of Obamacare. One action you can take to make sure your voice is heard in that discussion is pick up the phone and call your newly elected, or newly reelected, state representatives and senators. Follow these steps to make that call.

Find Out Who Represents You In The House And Senate

The obvious first step is to look up who represents you and get their contact information. The House of Representatives and Senate websites both have handy search boxes on their home pages to help you not only determine who your representatives are, but also find their phone numbers.

Once you've decided whom you're going to call, make sure you know exactly where this person stands on Obamacare. Check out statements they've made about it in the past, as well as, if they are an incumbent, how they've voted on healthcare.

You may be surprised what you find. For example, in speaking to Politico about about Obamacare, Representative John Shimkus from Illinois said, "No one is banging on my door saying, ‘Save this program.'" If you live in eastern/southeastern Illinois and feel differently, you may want to give Shimkus a call.

If you're passionate about protesting the repeal of Obamacare, you probably already know your reasons why. It's easy to clam up, though, once you reach someone on the other side. To avoid stage fright via phone call write down the points you want to make. Whether its speaking about your own personal experience with Obamacare, advocating for the parts of it you like, or just calling out your representatives on their failures to bring their constituents affordable health care, getting your thoughts down on paper first can make a big difference in the conversation you have. And if you get particularly phone shy, try writing yourself a script to make sure your words come out just how you want them.

The last step is also the biggest. Making a phone call to your elected official can seem daunting, but it can make a difference. Recently, in a series of widely shared tweets, blogger Emily Ellsworth wrote that calling members of Congress was the most effective way of getting their attention, as she observed during her time as a staffer. And once you get someone from their office on the phone, make sure they know you are a constituent and that they are there to represent you.

Calling your representative is just one action you can take to make sure your voice is heard in the debate over Obamacare, but it's a big one. And after you've called once, why stop there? Feel free to make calling your elected officials something you do on the regular.