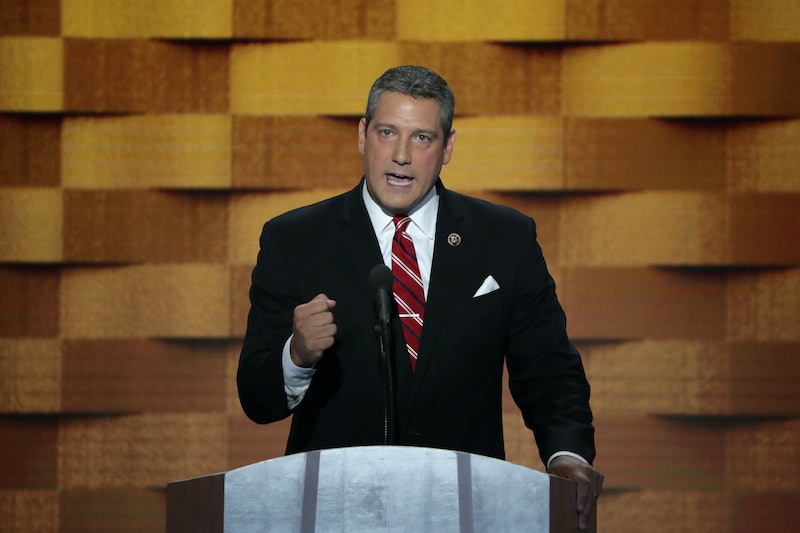 While it seemed like Nancy Pelosi was set to remain the House Minority Leader, Ohio Democrat Tim Ryan announced a challenge to Pelosi for the position on Thursday in a letter to Congress. That would also put Ryan in a position to become the Speaker of the House if the Democrats retake Congress in 2018. Pelosi has been the top House Democrat since 2003, spending time as speaker from 2007 to 2010.

Ryan's letter focuses on a change of leadership and comes after Democrats lost control of the House for the fourth straight election. "While having a position in Democratic Leadership has never been my life's ambition, after this election I believe we all need to re-evaluate our roles within the Caucus, the Democratic Party, and our country,” Ryan stated.

We're still a ways off from finding out if the House of Representatives becomes a battle of Paul Ryan against Tim Ryan to see who is most Ryan. It's still unclear whether Ryan could actually unseat Pelosi. For her part, Pelosi has dismissed Ryan's effort, telling reporters, “Without even asking anybody for a vote, I have over two-thirds of the caucus supporting me. When — it’s a funny thing in a caucus or any place, when somebody challenges you, your supporters turn out both internally in the caucus and in the country."

But it's worth looking at who this guy is — without a Democratic president, he could become an important leader of the Democratic Party for the coming years.

1. He Was A High School Quarterback, And A Congressman By Age 29

Ryan was a star quarterback at John F. Kennedy High School in Warren, Ohio. He went to college on a football scholarship, but transferred when he broke his knee. He studied political science and worked for his predecessor Jim Traficant's staff, before going to law school. In 1999, Ryan won an Ohio state Senate seat at age 26. In 2002, he won the Congressional seat from his former boss, Traficant, who was running for reelection from jail for taking bribes.

2. He Represents A Blue-Collar Ohio District

Ryan hails from Ohio's 13th Congressional District, which encompasses Youngstown and parts of Akron. It's an area that once had thriving steel and manufacturing jobs, but which, like much of the Midwest, saw those jobs dry up and people move away as the economy stopped focusing on blue-collar manufacturing. However, the community is slowly adapting to the modern economy — the Youngstown Business Incubator is recognized as world-class, and President Obama touted its 3D-printing industry in a State of the Union. Mahoning County, which mostly aligns with the 13th District, saw big growth in Trump's share of the vote compared to 2012 — Obama beat Romney 63-36, but Clinton beat Trump just 50-47.

Ryan agrees with Trump on one of his main deviations from Republican orthodoxy — he's been an outspoken fighter against free trade in Congress. In 2015, before Clinton announced her campaign, Ryan wrote an op-ed in Roll Call declaring that "Progressives are Ready for Hillary."

Ryan is Catholic and voted reliably pro-life for most of his Congressional career. But recently, as his national profile grew, he backed off. In 2009, the National Right to Life Counsil called Ryan a "Pro-Life Imposter." He wrote an op-ed in the Akron-Beacon Journal last year entitled, "Why I changed my thinking on abortion," and in 2011, voted against banning federal health coverage from including abortion.

5. He Can Give A Fiery Speech

Just consider the below evidence:

Ryan wrote a book on mindfulness, sponsored a bill to fund mindfulness programs in schools, and organizes a weekly meditation session on Capitol Hill.