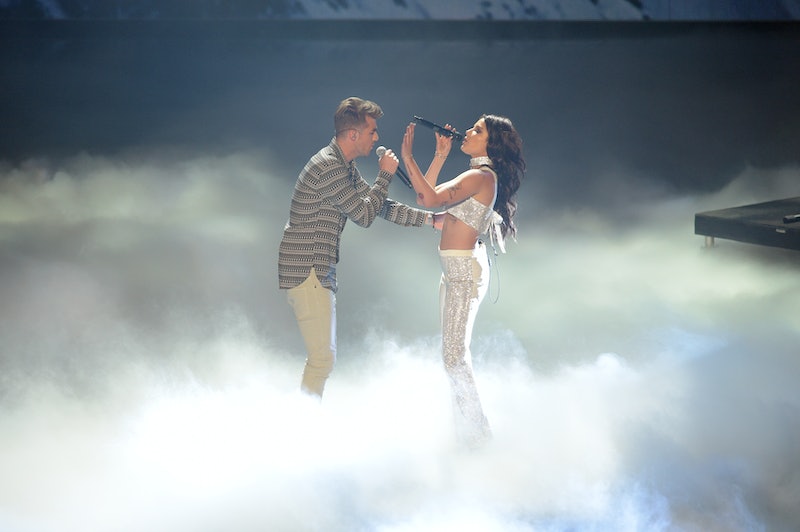 Real talk: When Halsey and Taggart got a lot ~closer~ at the VMAs over the summer, both Taggart and Alex Pall (the other half of The Chainsmokers) were in serious relationships with their live-in girlfriends, they revealed to Billboard in their September 2016 cover story. But in a radio interview on 96.ONE THE EDGE's Mike E & Emma, Pall reportedly spilled some serious tea about his co-Chainsmoker's relationship.

"Drew just broke up with his girlfriend like two days ago," he reportedly told the DJs the same day the Billboard story came out online, according to HollywoodLife. He even mentioned that the VMAs performance might have had something to do with it.

"You know, I’m sure that factored in," he said of the performance. "I know his girlfriend, I know her really well and I know he really loves her but I think its just a matter of, things are so hectic right now and sometimes you just feel bad about… I think he feels really guilty about the fact that we’re always away and we’re doing crazy things and like there’s certain opportunities and situations that will be coming up that are going to put a strain on is relationship and I think he wanted to free [sic] guilt free in the stuff he was doing." Pall reportedly also said in the radio interview, "I know that for sure we both have a crush on Halsey there’s no doubt about that."

But just because Taggart and Halsey got close on stage, it doesn't mean that anything actually happened off stage. Especially because there seemed to be some drama go down between the two. The Chainsmokers dissed Lady Gaga in an interview, and the singer clapped back on Twitter, with Halsey soon after complimenting Lady Gaga on her own account:

Taggart then seemed to respond to Halsey — his account tweeting, ".@halsey f*ck you bald b*tch." But he quickly claimed that his account was hacked and that he would never say something like that. For her part, Halsey allegedly then unfollowed Taggart on Twitter, according to Seventeen, and tweeted, "ok breathe."

Clearly, if anything actually was wrong between them, things have been patched up enough that the two are performing together at the AMAs on Nov. 20 — but that certainly doesn't mean that there has ever been anything romantic between Halsey and Taggart off stage.