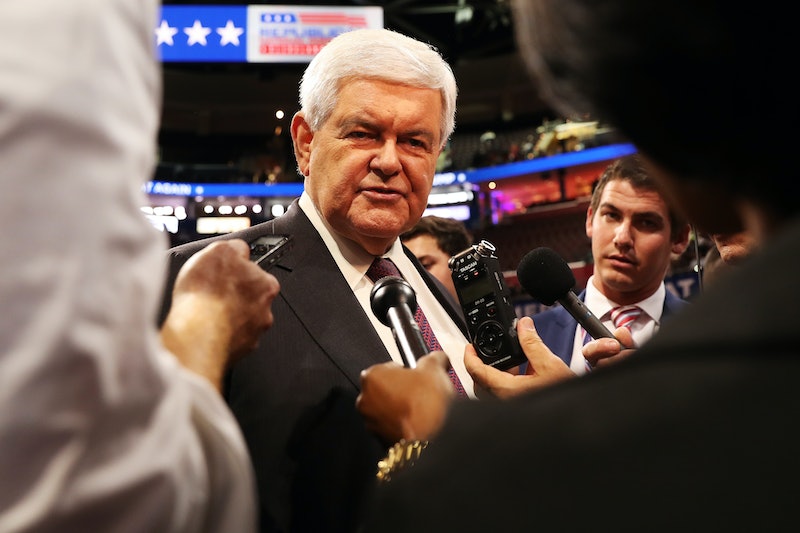 In an unexpected development, Newt Gingrich won’t serve in Donald Trump’s cabinet, the former House speaker announced Thursday. Gingrich’s name had been floated for a number of different cabinet positions, but evidently, it’s not going to happen. It’s unclear whether Trump or Gingrich made the decision, but either way, it’s good news for the country.

Gingrich has had a storied, sometimes disgraceful career in American politics. He spearheaded the Republican takeover of Congress in 1994, which gave the GOP control of the House of Representatives for the first time since 1952. As speaker of the House, he led the impeachment charges against Bill Clinton after the Monica Lewinsky scandal, which was made awkward after the fact when it was revealed that Gingrich himself was having an extramarital affair at the same time. In 2012, he ran unsuccessfully for the Republican presidential nomination.

There are two good reasons Gingrich should be kept as far from government as possible. For one, though he’s long enjoyed a reputation as an “ideas man” in the Republican Party, many of his ideas are downright ridiculous.

Gingrich has proposed, for instance, putting enormous mirrors in space that would reflect the sun’s light onto city streets, thus rendering streetlights obsolete and “reduc[ing] the current danger of criminals lurking in the darkness.” He wants a system of space lasers orbiting the Earth to protect America from foreign threats, and a colony on the moon to mine for resources.

In addition to being a big fan of science fiction, Gingrich is also a mouthpiece of some quite bigoted views. In 2012, he accused President Obama of harboring an “anti-colonial, Kenyan worldview,” and after Obama produced his long-form birth certificate, Gingrich asked why it took the president so long to do so, grumbling that “the whole thing is strange.” He’s called Obama “the food stamp president,” derisively referred to bilingual education as “the language of living in a ghetto,” and accused marriage equality proponents of pushing “a gay and secular fascism.”

Occasionally, Gingrich’s bigotry circuits malfunction, and he says things that don’t make much sense. He once warned that America was headed towards becoming “a secular atheist country, potentially one dominated by radical Islamists,” neglecting to explain how a country can simultaneously be atheistic and Islamic.

Lastly, there’s his ego, which is more often a source of amusement than a cause for concern. In hand-scribbled notes from his time in the House, Gingrich envisioned himself as a “definer of civilization,” “teacher of the rules of civilization,” “arouser of those who form civilization,” and “leader (possibly) of the civilizing forces.” He also predicted without equivocation that he would be the Republican presidential nominee in 2012, which was a hilariously bad prediction.

It’s probably for the best that a guy like this isn’t in the executive branch. Gingrich’s presence in the federal government would be unnecessary. One absurd, ego-maniacal bigot in the White House is more than enough.