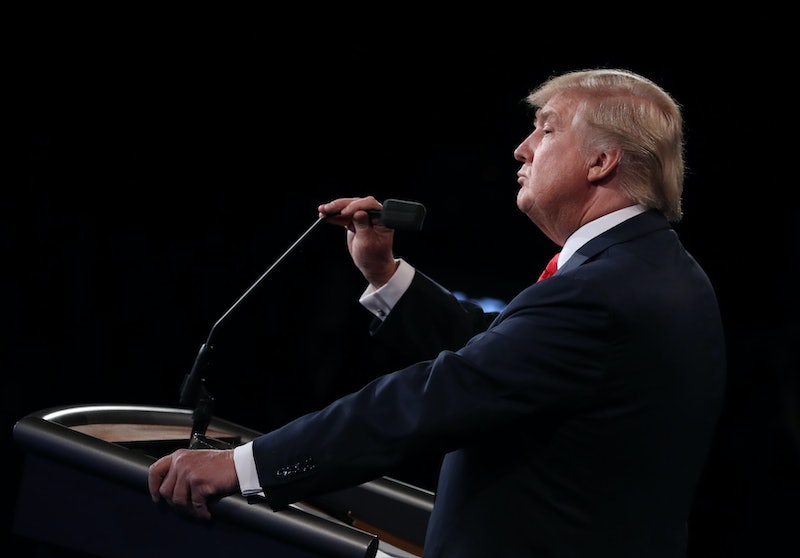 Following reports that President-elect Donald Trump's administration may pursue a registry of Muslims in the United States, some Americans took to social media to proclaim their intent to register alongside their Muslim counterparts. It's a moving show of solidarity, even though the hashtag #RegisterMeFirst is purely symbolic.

The hashtag gained popularity on Twitter following comments made by Kansas Secretary of State Kris Kobach, an anti-immigration advocate reportedly part of Trump's transition team, who said the president-elect's policy advisers had been considering starting a registry for immigrants from Muslim countries, according to Reuters. A Trump supporter, Carl Higbie, claimed the Japanese-American internment camps of World War II as a precedent for the registry during an appearance on Fox News.

"President-elect Trump has never advocated for any registry or system that tracks individuals based on their religion, and to imply otherwise is completely false," Trump transition team spokesman Jason Miller said in a statement. This is in spite of video evidence to the contrary; when asked in November 2015 if he would institute a database of Muslims, Trump told an NBC News reporter, "I would certainly implement that, absolutely," the Guardian reported.

Of course, the plan of non-Muslim Americans registering themselves as Muslims might not actually be feasible. After attacks on New York City by members of al Qaeda on Sept. 11, 2001, President George W. Bush's administration instituted the National Security Entry-Exit Registration System (NSEERS), which the Trump administration's Muslim registry would likely be modeled off of. NSEERS was in place until 2011, and under it people from "higher risk" countries had to be interrogated and fingerprinted when they entered the United States, Reuters reported. Some U.S. residents had to go to government offices to register and check in from time to time.

Kobach — who, let me remind you, is reportedly on Trump's transition team — had a hand in creating NSEERS, and he was also involved with writing harsh immigration laws in Arizona and other states, according to Reuters.

The crucial issue with #RegisterMeFirst is that non-Muslim American citizens won't be able to register if Trump's policy targets immigrants from Muslim countries. It's probably more effective to get involved and make sure the registry doesn't happen in the first place.