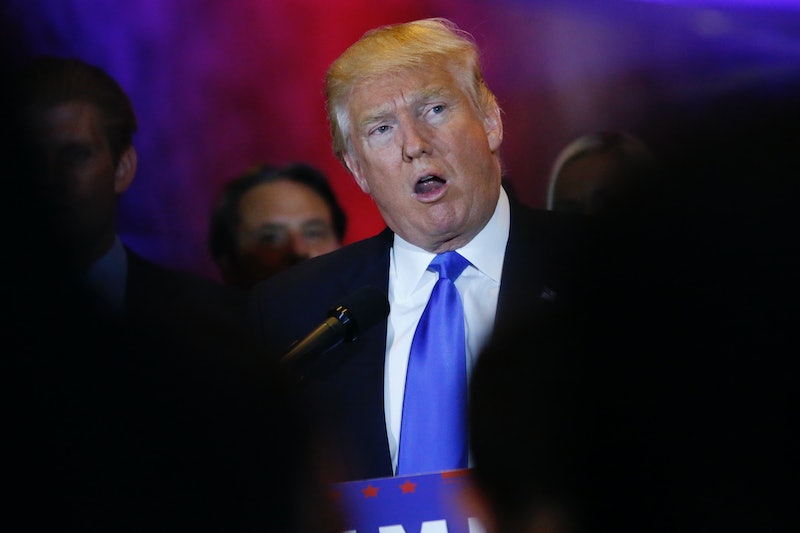 Sure, Donald Trump was elected president on Nov. 8 — but, no, Americans don't have to blindly accept his administration's possibly discriminatory policies. If you have some cash to spare, even a small amount, there are plenty of organizations opposing Trump you can donate to that are doing good work to protect the rights of marginalized groups.

A Trump presidency is frightening for many reasons. The president-elect has said on camera that the United States should "absolutely" institute a registry for immigrants from Muslim countries (though a Trump transition team spokesman recently denied this). Trump has made racist and discriminatory remarks, and he wants to infringe on reproductive rights by appointing anti-abortion Supreme Court judges who could possibly overturn Roe v. Wade. He wants to build a border wall with Mexico to discourage illegal immigration, and he once called Mexican immigrants "criminals" and "rapists" in a speech. One of his transition team members, Kansas Secretary of State Kris Kobach, said the Trump administration could commence construction of the border wall without Congressional approval, Reuters reported.

But there are organizations working against Trump's xenophobic, sexist, and Islamophobic proposals, and the best way you can make sure they have enough resources to put up a fight against the president-elect's administration is by donating either your time or your money.

Here are a few organizations you might want to start with.

Trump and his vice president, Mike Pence, have been open about wanting to get rid of Planned Parenthood and opposing abortion. This is in spite of the fact that Planned Parenthood is mainly involved in preventative primary care rather than providing abortions. Without the nonprofit, many people would lose access to necessary health care, like hormone therapy for transgender individuals. If those rights are important to you, consider donating to Planned Parenthood.

The ACLU is a nonpartisan, nonprofit that provides legal assistance to protect civil liberties. The organization has been involved in everything from freedom of speech to marriage equality, and its executive director, Anthony D. Romero, issued a statement on Trump's election. "One thing is certain: we will be eternally vigilant every single day of your presidency and when you leave the Oval Office, we will do the same with your successor," Romero wrote. Here's how to help the ACLU in their fight for our rights.

Members of the Standing Rock Sioux Tribe have filed a lawsuit against the construction of the Dakota Access Pipeline, which will both destroy sacred grounds and likely poison the tribe's water supply. Unfortunately, the CEO of the pipeline company told NBC News that he's "100 percent sure" the Trump administration will approve the pipeline. Here's how to contribute to the legal defense effort and Stand With Standing Rock.

The Mexican American Legal Defense and Educational Fund works as the legal defense of the Latinx community, working to advocate, educate, and politically empower Latinxs across the country. Considering Trump's statements on Mexican immigrants, now more than ever is the time to donate to MALDEF.

Trump has appointed climate change skeptic Myron Ebell to head the Environmental Protection Agency, and tweeted about climate change being a "hoax" on multiple occasions. Here's how to donate to the Sierra Club, which is a grassroots environmental organization founded by John Muir.

National Association For The Advancement Of Colored People

The NAACP's mission is "to ensure the political, educational, social, and economic equality of rights of all persons and to eliminate race-based discrimination." There was an increase in hate crimes following Trump's election, so by donating to the NAACP you could be helping prevent future hate crimes.

The Human Rights Campaign is a civil rights organization advocating for LGBTQ+ equality and basic rights. Pence has a shaky history when it comes to LGBT rights; as Indiana's governor he signed the Religious Restoration Freedom Act, which allowed business owners to discriminate against LGBT customers if they deemed serving them against their religion. (He later had to amend the law amid backlash.) Here's how to donate to the Human Rights Campaign.

Fake news and media bias have been all over the news in the wake of the election results. If you're interested in supporting investigative journalism catered to the public interest, consider donating to ProPublica, an independent nonprofit newsroom.

The Trevor Project is a nonprofit focused on suicide prevention among LGBTQ youth. It runs a toll-free, confidential suicide hotline, along with other resources for LGBTQ teens in crisis. The number of calls to LGBT Suicide Hotlines reportedly spiked following Trump winning the presidency; here's how to donate to the Trevor Project.

The NRDC is another nonprofit devoted to protecting and conserving the environment and wildlife through the use of law, science, and membership support; here's how to donate to the National Resources Defense Council.

The Southern Poverty Law Center is a nonprofit focused on advocacy surrounding civil rights. The SPLC is especially well-known for defeating white supremacist groups in court, something particularly relevant now that Trump has appointed Steve Bannon, who is associated with white nationalism, as his chief strategist. Here's how to donate to the Southern Poverty Law Center.

This list is just a start; there are plenty of other ways to get politically involved and oppose unjust or discriminatory policies proposed by the Trump administration, whether on a local or national level. Here's to making a difference!

More like this
Here's How To Support Jewish People Amid Rising Antisemitism
By Hannah Orenstein
Prince William Condemns “Unacceptable” Comments Made To A Black Guest At Buckingham Palace
By Shahed Ezaydi
The David Beckham Qatar Controversy, Explained
By Sophie McEvoy
Here's The Role Lady Susan Hussey Played At Buckingham Palace
By El Hunt
Get Even More From Bustle — Sign Up For The Newsletter