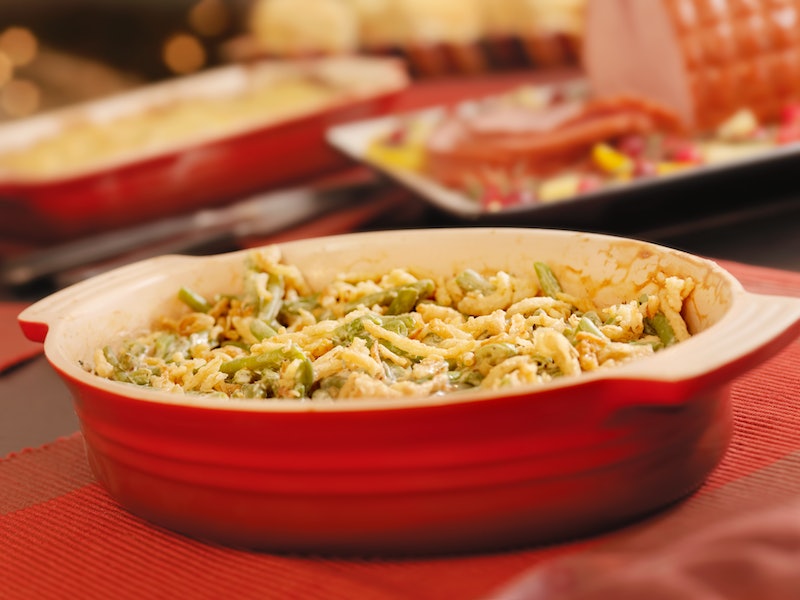 It's been about 10 years since I stopped eating meat, which means this will be my 10th Thanksgiving as a vegetarian. You would think that after 10 years of spending the holiday with basically the same people, their gawking at my vegetarianism would eventually get less annoying. This is not so, though — because there are some things people say that every vegetarian is so sick of hearing on Thanksgiving (and any other day, for that matter). It's not even just the people sitting at the table with you on the actual holiday — it's basically anyone you talk to about Thanksgiving dinner in the days leading up to it. And to be honest with you, at this point, hearing the same stuff over and over again is exhausting.

Look, I get it — some people are genuinely curious about what it's like to be a vegetarian on a holiday that is mostly centered around meat. As tiring as it may be to say the same thing over and over again, I'm fine with answering questions and explaining things to anyone who asks nicely. What I'm not here for is the people who are just downright rude for no real reason except that they love meat. Sometimes it seems like someone is personally offended that I'm not chomping down on turkey along with them, and it's confusing to me. Why does anyone else care what I'm eating?

If you're a vegetarian or a vegan, you know what I'm talking about. From your distant relatives asking you the most invasive questions possible to clueless hosts who don't understand why you can't eat a certain dish, there are a lot of frustrating things to deal with on Thanksgiving, including these annoying things every vegetarian is sick of hearing. Let's talk about them now and move on, shall we?

Why is bacon thought of as the best kind of meat of all time? Every time someone finds out I don't eat meat, one of the first things they say to me is something along the lines of, "But what about bacon?" You literally will never meet a vegetarian or vegan who says, "Well yes, of course I eat bacon, it's the only exception I make." If we gave it up, then clearly, we are fine with not having it.

2. "But It's Not Thanksgiving Without Turkey!"

Really? Is that so? Because I kind of thought Thanksgiving was supposed to be more about feeling grateful for what we have than eating a dead bird. But maybe that's just me.

Uh... I wouldn't exactly call a vegetable dish fancy, but sure. Hey, if you guys can make dishes you're excited to eat, why can't vegetarians do the same without being considered high maintenance?

4. "Please Don't Tell Me You Eat That Gross Tofurky Stuff."

I don't, personally, but if I did, I would have to say thank you so much for that very polite comment! I love when people tell me what I'm eating is disgusting.

Well, between the three different kinds of potatoes, mountain of rolls, several vegetable dishes, and piles of dessert later on, I'm pretty sure I'll be OK, but thanks for your annoyed concern.

6. "Do You Want Some Of This Stuffing? I Didn't Add Any Meat To It. Except Chicken Broth. You Can Have That, Right?"

Thank you, and I genuinely appreciate the offer, but no, I cannot have chicken broth. It literally has the word "chicken" in the name. It is meat. I do not eat meat.

No, believe it or not, I, a vegetarian, do not eat chicken products.

No. I can't. You see, when food cooks, flavors blend together and different foods become one. So, if those green beans were made with bacon, then the bacon is still there in some way, even if I pick out the big pieces. So, no. I'm good.

9. "My Sister Tried Out The Vegetarian Thing Once. She Gave It Up After A Year Or So. Most People Don't Stick With It."

Cool story, bro. I'll let you know how my trendy fad diet is going next year!

10. "Are You Grossed Out That We're Eating Meat In Front Of You?"

No, personally I am not. Sure, maybe some vegetarians and vegans are, but I am not, and most vegetarians I know also do not care. And, if I were, I probably wouldn't have come.

11. "So Are You Never Going To Be Able To Host Thanksgiving Because You Can't Make The Turkey?"

I mean, I feel like you can host Thanksgiving and have someone else make the turkey, but maybe that's just me.

Oh my God, you're not going to tell on me?! Really?! You mean I can eat meat without getting in trouble?! I'm sorry, but what does that even mean? Also, no, I don't want to eat meat. Please stop obsessing over my diet.

13. "Aren't You Hungry? I Feel Like You Barely Ate! You Must Be Starving."

My favorite thing ever is when people watch how I'm eating and then give me feedback. It is so fun!

14. "Hey, Those Vegetables Have Feelings Too!"

Hardee-har-har. You, sir/madam, are a comedian. How have you made it this far without your own Comedy Central show?

Good! More for me.

More like this
Meet The Spice Company Founder Who Sees Chai As A Metaphor
By Madhuri Sathish-Van Atta
25 Quotes About Love To Share During Pride Month 2022
By Madeleine Aggeler and Emma Garza
If Your Refrigerator Is A Mess, These 25 Organizing Products Can Help
By Courtney Young
Here’s What Sarah Jessica Parker’s Canned Cosmo *Actually* Tastes Like
By Emma Garza
Get Even More From Bustle — Sign Up For The Newsletter