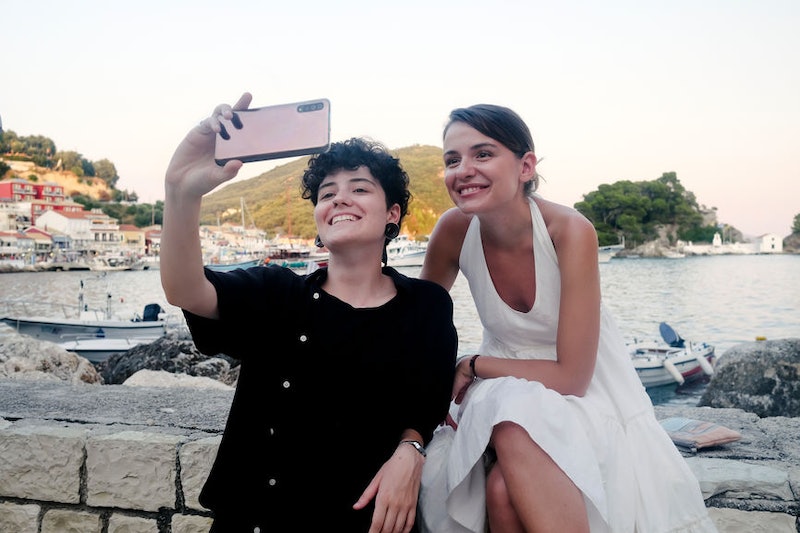 People will go to great lengths to capture the perfect picture, and there's definitely something to be said for a selfie you love — but getting those "likes" on social media may not be worth the risk. According to a new study that analyzed the most selfie-related deaths by country, selfies among millennials are getting more dangerous. Duck face and Valencia filters are all well and good, but trying to snap that photo on a mountain top with no safety railing is a big no-no.

Selfies are now ubiquitous on social media, their popularity steadily growing throughout the early 2000s especially among teens (myself included. I mean, how else was I going to show off my new haircut?). Self-taken photos truly exploded on the scene way back in 2010, when the front-facing iPhone 4 camera was introduced, enabling people everywhere to easily see and adjust their pose for the photo they were about to take. In November 2013, the Oxford English Dictionary declared “selfie” the word of the year — and the first reported selfie-related casualty followed in March 2014.

As selfies became more extreme and adventurous, the numbers of incidents steadily rose — and it is this phenomenon that the current study, titled "Me, Myself and My Killfie: Characterizing and Preventing Selfie Deaths," led by Carnegie Mellon University and Idraprastha Institute of Information, examines. In 2015, the study notes that Google estimated as many as 24 billion selfies being uploaded to Google Photos — the same year that media outlets reported there were more fatalities due to selfies than by shark attacks. All told, found the study, there have been a total of 127 reported selfie-related fatalities between March 2014 and September 2016. The data suggests that selfie-related casualties have been doubling each year, with 15 deaths in 2014, 39 in 2015, and 73 before September 2016. So think before you snap, people!

While just a quick glance at Facebook or Instagram will show you just how popular selfies are among young adults, and those risky selfies seem to be a uniquely millennial problem. Out of the 127 deaths, the study found that 41 victims were under 20 years of age, 45 victims were between 20 and 24 years old, and only 17 fatalities were attributed to those 30 years of age or older. In terms of gender, men accounted for 75.5 percent of the casualties, making them more likely to die by extreme selfie than women. Most of the causes of death were related to height and elevation — for example "people falling off buildings or mountains while trying to take dangerous selfies." The other most dangerous situations were water (and a combination of water and height) and train-related incidents (reflecting the trend in train track selfies).

The study also broke down the selfie deaths by country. Here are the top five most dangerous places to take a selfie:

Accounting for over half (or 51.76 percent to be exact) of the total selfie-related deaths, India holds the top spot for the country with the most selfie-related incidents. Of India's reported 76 selfie-related deaths since 2014, 87 percent were water-related. In one particularly tragic incident, a group of 10 people posing for a selfie on a boat were tipped into the water, and seven people drowned. The Mumbai police are attempting to fight this selfie epidemic, the study notes, by classifying 16 zones across the capital city as no-selfie zones.

Pakistan has experienced nine selfie-related deaths since March 2014. The tragic incidents, most of which involve falling from great heights or drowning, are all too painful to read about.

With a total of eight selfie-related incidents, the USA is right behind Pakistan with the third most selfie deaths. Three of these deaths were weapon-related, reports the study. In one of the most recent incidents, the Washington state resident posed with a gun he believed to be unloaded, and shot himself in the face.

Russia is fourth in the world when it comes to selfie deaths, with a total of six since 2014. In a particularly gruesome incident in 2015, two Russian soldiers posed holding a live grenade, and only the phone survived the unexpected blast. Authorities in Russian have created public posters, leaflets, and a web campaign warning of the dangers of taking selfies, as well as providing detailed safety guidelines.

5. The Philippines And China (Tied)

Again, there's nothing wrong with taking selfies if they make you feel empowered — but it's a good idea to pay attention to your surroundings. And please, put down that selfie stick during a lightning storm. Trust me — the cool photo is not worth the risk.

More like this
25 Quotes About Love To Share During Pride Month 2022
By Madeleine Aggeler and Emma Garza
How To See The Lunar Eclipse On May 15-16, 2022
By Kaitlyn Wylde
Remember These Ancient Pieces Of '90s Tech?
By Lucia Peters and Emma Carey
What Is “Night Luxe?” Breaking Down TikTok’s New Aesthetic
By Courtney Young
Get Even More From Bustle — Sign Up For The Newsletter