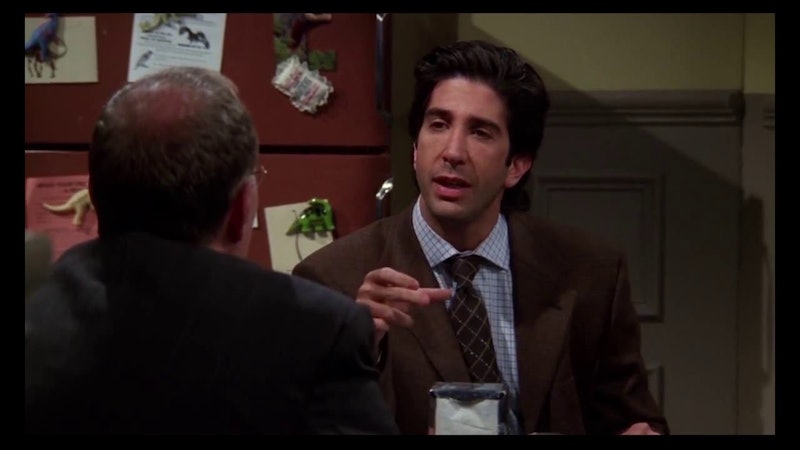 There are two things that Ross Geller taught me about life: One, leather pants are a lot more complicated than you might think, and, two, you should never EVER steal someone else’s sandwich. Especially when it’s a really. Good. Sandwich. Someone recreated Ross’s Thanksgiving sandwich from Friends, complete with a “Moist Maker,” and it looks just as glorious as Ross made it out to be. Now if someone could just teach me how to put my head in a turkey without suffocating, all of my '90s Thanksgiving dreams would be realized.

In a famous episode from Season Five of Friends (appropriately titled, “The One With Ross’s Sandwich”), Ross freaks out when someone at work steals his Thanksgiving sandwich. “My sister makes these amazing turkey sandwiches,” he explains. “Her secret is, she puts an extra slice of gravy soaked bread in the middle; I call it the Moist Maker.” When he finds out that the sandwich thief is his boss, Ross goes nuclear.

In a recent video, YouTube chef Oliver Babish (aka Andrew Rea) demonstrates how to make Monica’s signature Thanksgiving sandwich. If you don’t already have leftovers from Thanksgiving, making the sandwich is no easy thing, as you first have to make a turkey, stuffing, gravy, and cranberry sauce from scratch.

Once you have all of the ingredients ready, though, the rest is pretty simple: You layer toasted bread with slices of turkey and dollops of stuffing and cranberries. The middle layer is the most important part: a slice of toasted bread soaked in homemade gravy. The finished sandwich is a thing of beauty:

Seriously, you might want to skip the whole Thanksgiving dinner thing, and just go straight for the sandwich. Er, just be sure to keep it away from food thieves.