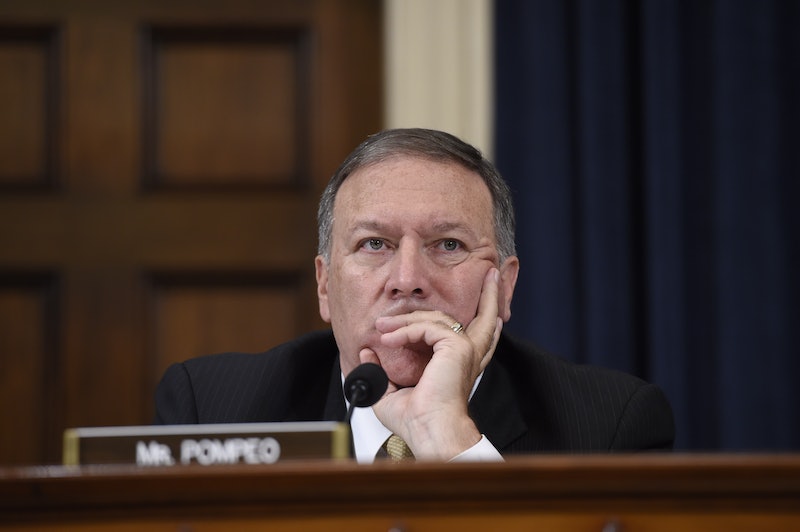 Over the last few days, Donald Trump has begun announcing his nominees and appointments for several major federal posts, including the widely-criticized selection of former Breitbart News chairman, Steve Bannon, to be his chief strategist. Trump announced two more selections — Alabama Sen. Jeff Sessions for attorney general and Mike Pompeo for Central Intelligence Agency director. Sessions is a bit better known and was a major Trump supporter throughout his presidential campaign, but who is Mike Pompeo, potentially the next CIA director?

Pompeo has served as a Congressional representative for the fourth district of Kansas since 2011, where he is, unsurprisingly. Pompeo attended West Point and Harvard Law School. Before his ascension to Congress, he returned to Kansas and worked for companies that created equipment for aircraft and oilfields.

In Congress, Pompeo served on the House Intelligence Committee and the Energy and Commerce Committee. However, he is, arguably, best known for his role in the House Select Benghazi Committee, which famously investigated Trump's presidential opponent, Hillary Clinton. Pompeo himself has a reputation for being a staunch critic of Clinton, an impression he underscored with his questioning during the marathon Benghazi hearings. When the committee's findings did not implicate Clinton, Pompeo took it upon himself to publish an addendum that heavily criticized her "ability to lead." The addendum was signed by one other representative, Jim Jordan of Ohio.

Reception to the news of Pompeo's appointment has been mixed. Pompeo's would-be predecessor, a Trump critic, has reportedly given his blessing, according to the below tweet from CNN's Jake Tapper.

However, others, like Toronto Star columnist Daniel Dale, heavily criticized Pompeo for comments the Congressman made in 2013 about Muslim imams in the United States:

Instead of responding [to terrorist attacks allegedly perpetrated by Muslims], silence has made these Islamic leaders across America potentially complicit in these acts and more importantly still, in those that may well follow.

The idea that a CIA Director could find all American imams "complicit" in terrorist attacks with which they are not connected is particularly worrying in light of Trump's previously proposed Muslim bans and Muslim registries, which his team currently denies. (Trump communications director, Jason Miller, stated Trump "never advocated for any registry or system that tracks individuals based on their religion, and to imply otherwise is completely false" in a press release on Thursday).

Trump has also suggested that he would use the powers of American intelligence agencies for torture, particularly waterboarding and other "enhanced interrogation" techniques. In a South Carolina speech last February, Trump told supporters, "Don't tell me it doesn't work — torture works."

Trump's statements do not appear to have dimmed Pompeo's enthusiasm for the position. In a statement released on his website, he accepted the nomination happily:

I am honored and humbled to accept the President-elect’s nomination to lead the Central Intelligence Agency. This was a difficult decision. I have genuinely loved representing the people of Kansas in Congress—working to make our community stronger and more prosperous. But ultimately the opportunity to lead the world’s finest intelligence warriors, who labor tirelessly to keep this nation and Kansas safe, is a call to service I cannot ignore.

President-elect Trump plans to ban or register Muslims and torture detained people. Whether Pompeo would implement those dangerous ideas as director of the CIA remains to be seen.