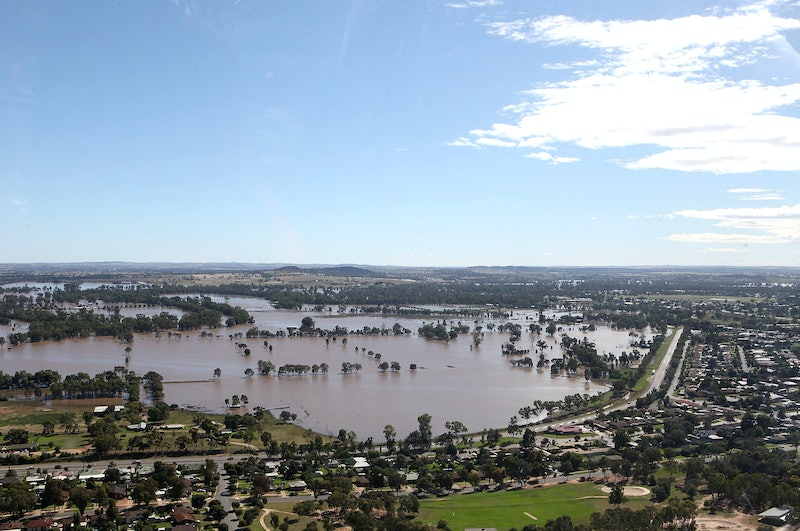 On Monday, the Intergovernmental Panel on Climate Change, a United Nations group, released its latest report on climate change in Yokohama, Japan. The impressively thorough 30-chapter report had a total of 309 authors from 70 different countries. It's a long and terrifying read.

Climate change is affecting every corner of the globe in every way imaginable. Ice caps are melting, sea levels are rising, heat waves and storms are increasing, water supplies are threatened, hunger is on the rise, coral reefs and fish stocks are dying, and food production is threatened — and all because of climate change.

Here are some truly terrifying things that could — and will — happen if greenhouse emissions are not curbed, pronto.

MIAMI BEACH AND NEW ORLEANS Will BE UNDERWATER

And they're not the only American cities. Also on the vulnerable list are parts of Boston, the New York City coastline, and much of Atlantic City. Miami has long been earmarked as particularly at risk to the effects of global warming because it's low-lying and built on top of a porous limestone foundation.

There are all sorts of terrifying interactives out there that you can use to check out what your hometown might look like if the polar ice caps melt, but we suggest you check out this one from the New York Times and this one from Climate Central — they can actually give you an idea of how much rising sea levels will affect you. Because the sea level is rising. Rapidly. Global sea level rise is currently pegged at three feet by 2100. That's a big problem.

WILDFIRES will BE YEAR-ROUND

Last year was an absolutely brutal one for wildfires, and the prediction is that the situation will only get worse in the coming years. Climate change combined with increasing human encroachment into forests leaves already-fire-prone areas such as parts of California and Colorado increasingly vulnerable to forest fires. These fires will be bigger, more destructive, and cause more air pollution than ever before. It is also likely that instead of having a wildfire "season," wildfires will become increasingly common year-round.

THE ALASKAN COASTLINE Will Shift

In fact, it's already shifting. Big time. The permafrost up in the very top of the Northern Hemisphere is not so "perma" anymore. The collapse of sea ice around Alaska is allowing gigantic waves to pummel the coast, which is leading to serious erosion. Entire communities are being forced to relocate to safer areas further inland. The village of Shishmaref, for example, which is built on a mile-wide barrier island around 600 miles northwest of Anchorage, could well be completely washed away.

That $20-per-pound filet mignon you buy from Whole Foods to treat yourself? Yeah, that could cost closer to $36 per pound by 2050. The IPCC report says that based on changes in temperature and precipitation alone, (that's not taking into account carbon dioxide emissions) food prices could increase between three and 83 percent by 2050.

The report points out that climate change negatively impacts wheat and corn yields in North America already; a problem which is only expected to get worse. Unless, of course, the agriculture industry starts making some serious changes.

THE NUMBER OF UNDERNOURISHED CHILDREN WILL SOAR

Linked to a global decrease in food production caused by rising temperatures, the IPCC report predicts that by 2050 the number of undernourished children under the age of five will have increased by 20 to 25 million, or 17 to 22 percent. Compared to a baseline scenario, the impacts of climate change could cause an increase of the global malnourished population of 49 million, or 11 percent, by 2050.

The most tragic thing about it is that those who had the least to do with causing global warming are the ones who will be most affected by global food shortages. The report cites an estimate from the World Bank that the world's poorest countries will need around $100 billion a year to attempt to offset the impacts of climate change. Aid from the richest countries currently only amounts to around a few billion dollars a year.

As temperatures continue to rise, it is expected that more people will die as a result of heat-related causes. The IPCC report states that several studies conducted throughout North America indicate that high temperatures will likely increase global mortality rates. Those thought to be most at risk are people with physical jobs; such as manual laborers, children, and the elderly.

WE MAY BE TRAPPED IN THE POLAR VORTEX EVERY YEAR

Now this is something even selfish peope should be scared by. It is more than likely that climate change was the culprit behind the excessively brutal winter that we've just experienced (or, if you live in numerous areas of the country, are continuing to experience). Climate change is causing huge swathes of sea ice in the Arctic to disappear, which is leaving gaping dark blue holes of open ocean water that absorb lots of sunlight. This causes the water to heat up, leading to more ice melting.

The jet stream, which essentially acts as a barrier between freezing cold northern air and more temperate southern air, is propelled by the temperature difference between northern and southern latitudes. According to some scientists, as this difference narrows, the jet stream grows weaker, which opens up the possibility of frigid Arctic air escaping the polar vortex and breaking through southward.

This could have caused the gigantic kink in the jet stream that led to our hideous winter weather, and most likely, it will cause it again.

Fortunately, the IPCC's report is not entirely all doom and gloom about the future of the world. Large sections of the document are devoted to suggested adaptations that could be made, both at the policy level and on the ground, to mitigate risks associated with climate change. For example, the authors suggest changing planting dates to combat decreasing yields of some cereals. So ... there's that.

There's also significant potential for land use planning and investments in infrastructure, water conservation, and health programs to significantly reduce the risks associated with climate change in North America. The authors point out that at the moment, most adaptation to climate change tends to be reactive rather than pro-active. If we're really going to tackle the problem, then we need to flip the dynamic around.

It's clear from this report that climate change affects everybody and everything. It's time to start taking it seriously.