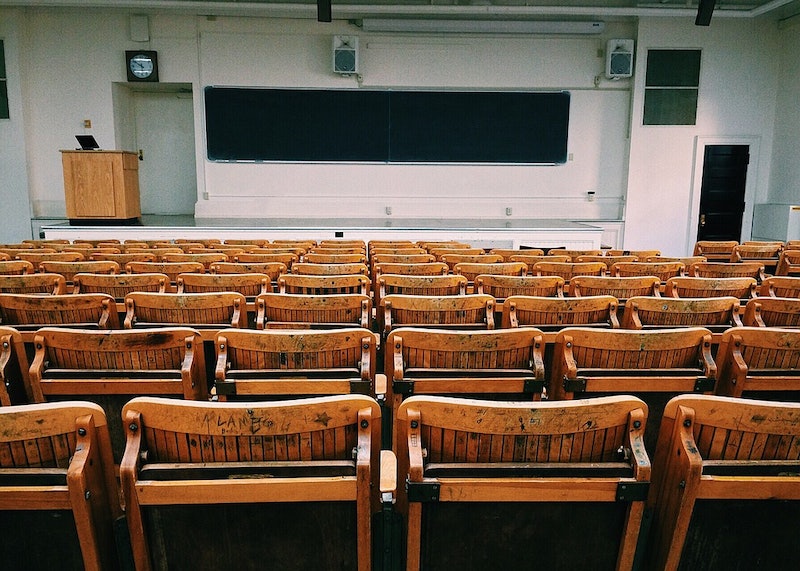 What does it mean to teach the day after a moment of national crisis? I remember, so distinctly, going to my early morning college classes the day after 9/11. A native New Yorker, I was a freshman at Oberlin College in Ohio, and my whole being was aching for home. Though I found solace in my classmates—most of whom I had met only days before—I looked to my professors for guidance. At my 9 am English class, we sat in a small room in a circle. We all were scared. We did not talk about the book we were assigned; we sat there and spoke about what happened, the unthinkable that had just occurred. My teacher could not give us answers, yet I felt such comfort through his presence. I had been raised by educators, understood their significance, the labor that gets put into preparing for class.

I emerged from that room with a different perspective. That morning, by listening to us and setting boundaries for discussion, my teacher helped us build the community we so desperately needed.

More than 15 years later, I am the college teacher—33 and pursuing my PhD. After over a decade post-college living in New York City, I’ve found myself at Ohio State. I joke that when it comes to Ohio, I can’t stay away.

I teach Introduction to Rhetoric and Composition. It’s not a course many choose to teach; it's more typically deemed a stopover while we pray for one of those tenure-track teaching jobs that are few and far between. But I love teaching this class, centralized around Representations of Disability.

“What does this mean, and what does this mean?” I ask my students, a mantra I repeat throughout the semester. I encourage them to consider the bigger picture and to think beyond the object of study.

“What does it mean?” I asked them when we looked at footage of Donald Trump mocking a reporter with a disability.

“What does it mean?” I asked them when we looked at Hillary Clinton’s mobilization of this footage in her own ad campaign.

“What does it mean?” so many of my students asked, the day after the election results were announced. I looked at them, and they looked at me. No one had an answer.

We knew the first class after the election was going to be hard, but in many ways, the following classes would be even harder.

In regards to ideological make up, the class I facilitate at Ohio State is far more diverse than the class I was part of as an undergrad. According to enrollment numbers for August 2016, almost 73 percent of students are Ohioans, many from rural areas. Some have parents who lost their jobs as factory workers. Others have spoken about gun violence in Cleveland. Many have shared that their families are made up of generations of Republicans. When we spoke about rhetorical choices made by the candidates during the debates, students were critical of both sides.

The day after the election, I sobbed as I walked from my home to campus. I had been up until three in the morning, when I fell asleep on the couch; I was woken up at six by a call from my sister, who was crying. “What do we do?” she asked me. She is a teacher at a public school in Brooklyn, situated in a predominantly blue community. “We go in,” was all I was able to say. On my walk — 1.8 miles — I kept thinking about how I would foster a safe and open space for students to discuss the results. I knew the way I entered the room would set the tone for the conversation.

Before going into the classroom, I took a deep breath. When I went inside, conversation stopped. I sat on the desk in the front of the room. My students waited for me to begin.

"I'm not going to lie,” I stated. “I'm really sad. And it's ok if not all of you share these feelings. But this was a close race and our communities are broken. So we need to talk about how we are going to work to make this better."

I pulled up a prompt, and gave them five minutes to write.

The first person that spoke — never an easy task — said he never felt more adult than when he voted.

I wanted to respond with, I’ve never felt more adult than in this moment.

Another student said she made it a personal goal to hug a Trump supporter, and to recite “Peace and Love,” as a reminder of what is still possible. She read us a spoken word piece, each line ending with “Peace and Love.”

Peace and love, a new mantra I began repeating.

Another student wrote and shared: "We HAVE to focus on the future. So much of this election has been about the past — we have to look forward."

My students talked about the necessities of listening and compassion. Many were exhausted from all the name-calling that permeated both campaigns. We spoke about the importance of self-care. Their comments gave me hope. Many are jostled; many are scared. But the exercise served as a reminder—there is still good in the world, and much of the good is happening through the people in our classrooms.

After I taught, I met with several other educators to commiserate. Amongst our colleagues, many of us felt free to cry. In addition to our own fears about our country, we addressed questions like: How do you fulfill individual course goals while also continuing to acknowledge vulnerable bodies in the classroom and beyond? How do you navigate multiple political perspectives in the classroom?

We knew the first class after the election was going to be hard, but in many ways, the following classes would be even harder.

We just finished reading Good Kings Bad Kings , Susan Nussbaum's novel about the dynamics of power in an institutionalized setting for young people with disabilities. The book switches between the perspectives of people in various positionalities. Some of the characters are young patients in a nursing home-like setting; others are employees. In one scene, a security guard, Louie, approaches a disabled child and states: “I can be a good king or I can be a bad king.”

I received an email from a student, Sofia, the day after the election. Sofia wrote:

The theme of power in the book has become a metaphor for the election and America. Donald Trump can be a Good King or a Bad King. Like Louie, he has the power in his hands to determine the quality of life for people below him. Advocacy and activism also plays a role in the bigger picture.

Prior to November 9th, we discussed the difference between activism and advocacy. This distinction became even more pertinent post-election.

“What does it mean?” I asked my students, as we analyzed the book, interrogating a scene of protest initiated by one of the young people in the text.

They talked about resistance and asserting independence. Fighting for what is right.

The line between fiction and our present was so thin we could barely make it out. I asked them: “How do we see protest movements developing on campuses and throughout our country?” We talked about the safety pin movement, and what it means to truly advocate for the protection of others. In other words, in the days post-election, the world kept turning. The reading needed to be completed. Final projects still had deadlines. However, I kept reminding them — as I continue to do — that as we interrogate the textual material, we need to apply, apply, apply.

I say the world keeps turning, but with a caveat, of course. Flexibility is necessary during this time. I’ve heard stories from numerous colleagues about students crying during office hours. Ten percent of Ohio State students are international, and several students have told me they worried about challenges in finding housing and employment after they graduate. Like so many other educational institutions, we’ve had violent incidents, including white nationalist posters on bulletin boards across campus. Nearby, at Capital University, a homophobic note was slipped under the door of a first-year student. Some populations are more vulnerable than others—a distinction that needs to be recognized. My classroom is a safe space, but it is not a sealed vault. I am working to provide tools to help students critically engage with what is happening outside.

At Ohio State, the semester is ending soon. Advisors are already asking for syllabi for spring. I think about conversations about activism and advocacy. For me, teaching has never been a neutral space. As I—and my colleagues—prepare for our first semester under a Trump presidency, it’s time to up the ante. Part of this means making a commitment to teach work produced by people of color, women, and the disabled. I'd encourage even teachers who are on a full year schedule to ask themselves: Where is there space to revise?

Via Facebook and Twitter, many teachers have offered resources. The closed Facebook group Pantsuit Nation has provided many useful links, but as with most materials on Facebook, there is a risk of being lost in a timeline. I sought out colleagues for advice. Those discussions yielded a preliminary list of inclusive materials oriented around social activism that scholars and educators at the secondary and post-secondary level can utilize:

A course syllabus that seeks to explain the rise of Donald Trump through the prism of America's history.

Eric Klinenberg's article "What Trump's Win Compels Scholars to Do," from The Chronicle of Higher Education.

A piece on surviving a Trump presidency, from an NYU-based sociologist and professor (available through subscription). From a series on teaching post-election.

Facing History is an organization that works with schools on curriculum to examine racism, anti-semitism and prejudice in order to connect the past to the present.

Racism, Xenophobia, and the Election from the editors of Rethinking Schools.

Rethinking Schools is a nonprofit organization with a mission based on "strengthening public education through social justice teaching and education activism." This article highlights resources to use the classroom as a space to address race and racism, particularly in relation to much of the rhetoric employed during and post-election.

Beyond the Ballot from Generation Citizen.

An initiative that focuses on empowering young people to engage with and work to reform the political system.

Post-Election Resources for Teachers from the Morningside Center for Teaching Social Responsibility.

A growing list of activities that acknowledge post-election fears and help build community in the classroom and beyond.

A collection of activities that covers everything from understanding implicit bias to setting up ground rules for respectful discussion in the classroom.

Syllabus for White People to Educate Themselves

A document shared widely throughout social media. The title describes it best.

For Teachers, from Yes! Magazine.

Teaching After the Election of Trump, from The Zinn Education Project.

This list provides a sliver of the resources available that can help guide potentially difficult conversations. Addressing the current political climate with our students can be scary, but it is necessary. Though the election can't be at the forefront of every lesson, it can exist in conversation with the materials we use to teach writing, and history, and math. Here's an example: Hillary Clinton currently has 63,541,056 votes from the general population. Donald Trump has 61,864,015. That is a difference of 1,677,041. It's just a number, of course — but it means far more when considering the bigger picture.