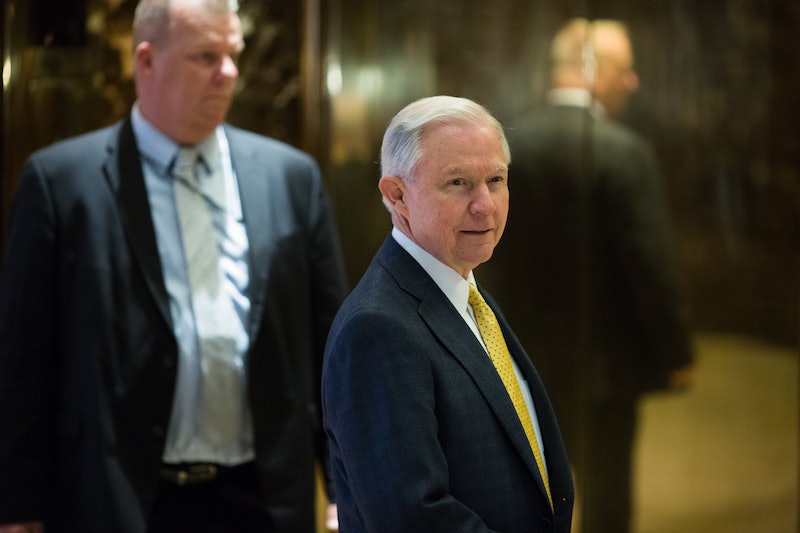 Donald Trump's latest power move, the appointment of Alabama Senator Jeff Sessions to the post of attorney general, has a lot of people scared for what's about to happen to this country. Sessions has a long history of racist, misogynistic, and anti-LGBTQ statements and actions that seem to confirm the hateful and discriminatory rhetoric that Trump propagated on the campaign. One of the biggest fears, particularly in light of the ultra-conservative wave that's sweeping the nation, is whether or not same-sex marriage will be overturned, and if Sessions will have any power to make that happen.

Although Sessions has supported some pretty LGBT-unfriendly policies, he won't have the power to overturn a Supreme Court ruling — not even the president or Congress can do that. Although there is a little debate on the idea of "judicial supremacy," the idea that the Executive Branch must follow the rulings of the Judicial Branch, the checks and balances of the Constitution seems to make it pretty clear that the president cannot act contrary to a current ruling.

The only way that same-sex marriage could be made illegal again is if SCOTUS overturned the landmark 2015 ruling in Obergefell v. Hodges. While that's theoretically possible, since Trump could appoint up to three justices to the court, the Supreme Court has only overturned 220 rulings in its entire history, and a lot of them were undoing discrimination and injustice rather than returning to it. The ruling in the case makes it pretty clear that same-sex marriage is the way forward as a nation, and opponents need to get with the times.

"The history of marriage is one of both continuity and change," the Obergefell v. Hodges majority opinion reads. "Changes, such as the decline of arranged marriages and the abandonment of the law of coverture, have worked deep transformations in the structure of marriage, affecting aspects of marriage once viewed as essential. These new insights have strengthened, not weakened, the institution. Changed understandings of marriage are characteristic of a Nation where new dimensions of freedom become apparent to new generations." If you need a little hope in light Sessions' appointment, just remember that the new generations are the ones who will keep the country moving forward, and soon they will be the ones in charge.

What Sessions may be able to do is relax pro-LGBTQ interventions and let states pass more anti-LGBTQ regulations without a peep from the federal government. Don't expect Sessions' Justice Department to call out anti-transgender bathroom laws like Loretta Lynch did earlier this week, but it doesn't look like he can take away peoples' right to be married either. It's going to be a really rough four years for millions of LGBTQ Americans, but their allies will be here to support them no matter what.