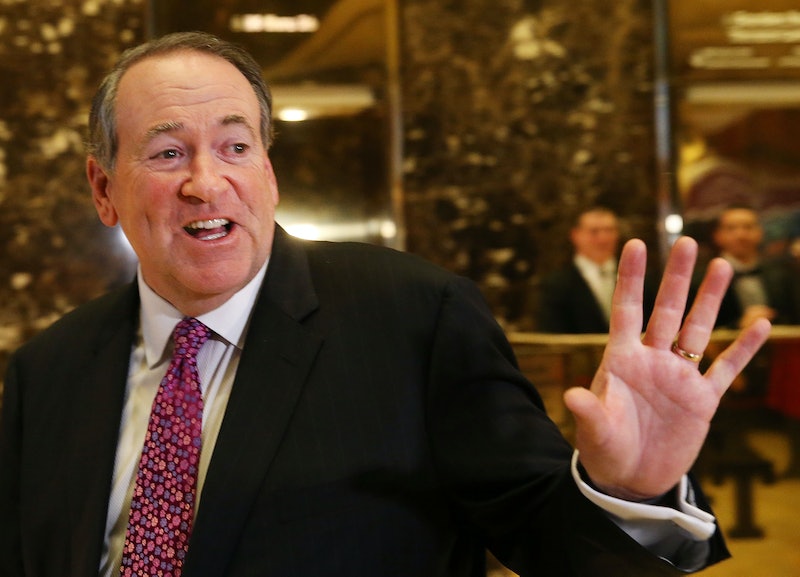 Since President-elect Donald Trump defeated Hillary Clinton last week ― soundly in the Electoral College, despite likely losing the popular vote by more than a million votes ― all eyes have been on the myriad appointments he has to make. And you can add another enthusiastic loyalist to the list of Trump administration job openings, and this one is a bit of a doozy ― former Arkansas governor Mike Huckabee will reportedly be U.S. ambassador to Israel, meaning the Baptist preacher will be in a chief diplomatic role with one of America's staunchest allies in the Middle East.

Huckabee, 61, was one of the stacked field of Republican presidential candidates this year, part of the considerable abnormal circumstances that ended with Trump seizing the GOP nomination, and subsequently the White House. He always spoke warmly of Trump, however, even boasting about wearing a Trump necktie during one of the primary debates. As such, it doesn't come as much surprise to see his name pop up for a job in the administration, although there had been little to no buzz about him becoming ambassador to Israel, and it's a decision that may have some considerable political implications there.

That's because Huckabee ― an Evangelical hardliner who finished second in the GOP primaries in 2008, and passed on a White House bid in 2012 ― will be taking charge after his boss has already indicated a desire to fulfill a longtime talking point for the Republicans. Namely, Trump reportedly wants to move the U.S. embassy from Tel Aviv to Jerusalem, a move which previous administrations have declared, only to fail to follow through.

It's a controversial proposal, due to what a Jerusalem embassy suggests about America's opinion of Israel's rights to the city. West Jerusalem and East Jerusalem have predominantly Jewish and Arab populations respectively, and the Israeli government views Jerusalem as their nation's capital. The Palestinians, however, do not concede this, viewing Jerusalem (or sometimes specifically East Jerusalem) as their capital, which is the crux of the political dilemma from the American perspective. Past administrations have avoided opening a Jerusalem embassy, to avoid the appearance of taking sides in the decades-long conflict.

And now, it'll be up to Huckabee to navigate. To be clear, he supports the Jerusalem embassy idea to the hilt ― as potential ambassadors go, he's made it very plain that he broadly sides with Israel, and he promised a Jerusalem embassy during his own 2016 run. In other words, if this doesn't happen now with the deck stacked in favor of moving the embassy, it seems unlikely any administration will make it happen, barring a change in the circumstances between the Israelis and Palestinians.