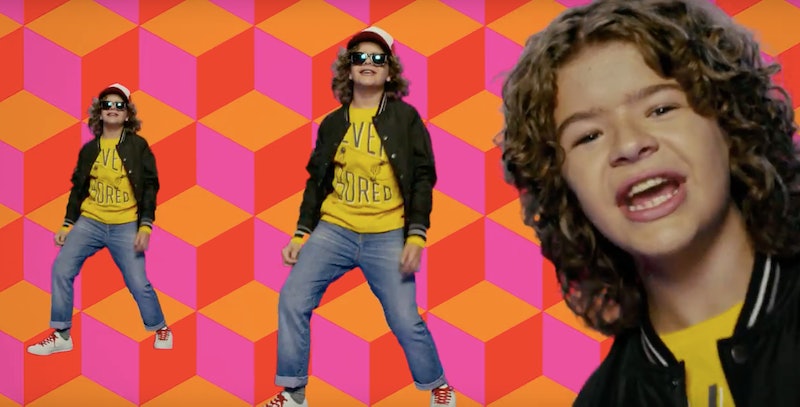 When it comes to Stranger Things, I am an unabashed fan of the hit Netflix show. Furthermore, I am convinced that Gaten Matarazzo, who plays Dustin, is the gift we don't deserve. He's a delight, which makes Matarazzo's Old Navy holiday advertisement the best thing happening right now in pop culture. The young star (who is, delightfully, a confirmed Hufflepuff, because of course he is) is front and center in Old Navy's holiday season campaign, rapping over the music of Technotronic's 1989 classic "Pump Up The Jam."

I'm not kidding when I tell you that this Matarazzo/Old Navy mashup is perhaps the most amazing thing you will watch all weekend, nay, all holiday season. Sure, there are plenty of great holiday ads to choose from. How can you possibly land on one? But I ask you this important question, friends, how many of those ads also feature one of the greatest Stranger Things cast members on Planet Earth?

Matarazzo raps about Old Navy giveaways and scratch-offs like a consummate professional. The ad is full of bright '80s colors and he looks like he's having the time of his life as he moves, grooves, and mimes eating chips and guacamole. It's genuinely difficult not being won over by his infectious zest for life.

Matarazzo isn't the only Stranger Things cast member who has had some fun side-gigs since the show debuted on Netflix over the summer. Co-stars Noah Schnapp, Finn Wolfhard, and Millie Bobby Brown have starred in music videos for Panic! at the Disco, PUP, and Sigma, respectively. Do these wunderkinds ever take a break?

This particular Old Navy ad is bound to bring you extra joy, thanks to Matarazzo, this holiday season. It may also be the kind of late-night talk show fodder that gets dug up in a decade or two's time if and when Matarazzo is a guest, because it is just the right levels of silly, geeky, and pure awesomeness.