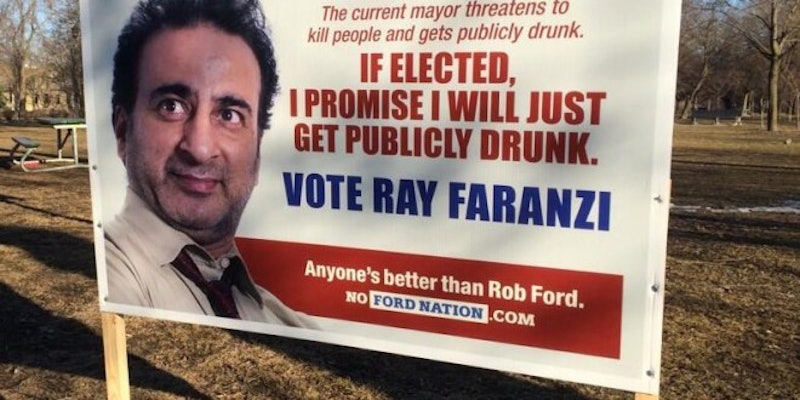 Rob Ford, Toronto's impossible crack-smoking, murder-threatening head of government, is running for World's Most Unlikely mayor again this year. But we're casting our vote for No Ford Nation, a group of campaigners promoting fake candidates that still manage to sound better than "Ford More Years."

No Ford Nation was started by Toronto resident Christina Robins in 2011 to oppose the mayor's policies. Ford's subsequent antics turned her original home for the movement, a humble Facebook page, into an actual organization. The posters promote a candidate that might be called the Anti-Rob Ford.

Bizarrely, Ford managed to basically avoid any crack talk in the city's latest mayoral debate, and his poll numbers aren't that bad. That's right: Ford could win. All the more reason to support these fake anti-Ford campaign signs that have turned up in a Toronto park:

1. Pot, Not Crack, Moves This Candidate to First Place

You know who smokes crack sometimes? Rob Ford. After months of heated speculation, he admitted as much in a news conference last year:

Yes, I have smoked crack cocaine. But ... do I? Am I an addict? No. Have I tried it? Probably in one of my drunken stupors.

Get off Rob Ford's back, world. He was drunk!

2. A Humble Campaign Promise to Urinate Off-Camera, Away From the Cops

Another promising anti-Rob Ford candidate, Jim Tomkins, ups the ante with a vow to stay away from cameras when urinating in public, a tough standard for Rob Ford to meet.

Ford was caught urinating behind a public school last year. Here's the evidence:

Somehow that looks less appealing on a campaign poster.

Being wasted in public is probably preferable to being publicly cracked out. If you agree, you may find something to like about Ray Faranzi.

Rob Ford might counter that he's good at public drunkenness, too. Ford was most recently suspected of public intoxication after he was ticketed for jaywalking last month. Which is at least tangentially related to this picture of Rob Ford strumming a guitar: