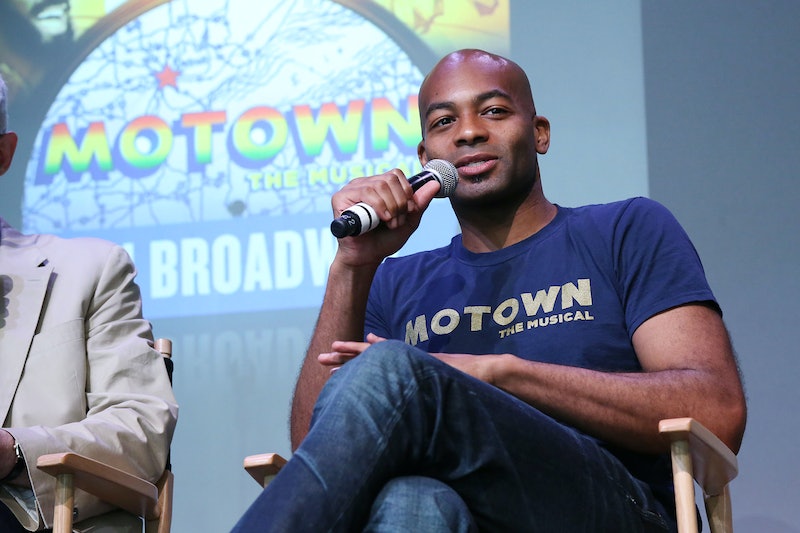 After the cast of Hamilton publicly addressed Vice President-elect Mike Pence, sharing their hopes that the new administration would protect all Americans, Donald Trump demanded that the Hamilton cast apologize, describing the incident as "harassment." But the man who made the statement, Brandon Victor Dixon, had his own response for Trump.

While Pence did encounter some blatant hostility at the theater, specifically loud boos from the crowd as he took his seat and during certain songs throughout the show, the actors themselves did not partake in any such negativity. In fact, Dixon, who took the lead in delivering the cast's message to Pence, discouraged the crowd from this kind of behavior after he pointed out Pence's presence in the audience. "There's nothing to boo here, ladies and gentlemen, there's nothing to boo. We're all here just sharing a story of love," he said. He also repeatedly thanked our future vice president for attending the show.

In addition to being polite, Dixon's response to Trump perfectly embodies the American values that Hamilton portrays and that the founding fathers fought for. The right to respectfully disagree with another person is one of the most basic building blocks of American society.

Dixon addressed Pence in a way that was welcoming, while also concerned. Pence was not insulted or harmed. For Trump to not only criticize the Hamilton cast for sharing their genuine worries regarding whether the future presidential administration will protect all Americans but to also demand that they apologize is jarring. The United States is not meant to be a dictatorship in which the people are required to praise their leaders. Even the audience members who booed in the crowd, which many find to be rude and ineffective, have the right to express their distaste for the country's political leaders as long as they are not violent or infringing on the rights of others.

Trump's comments have been widely criticized on social media by both the general public and celebrities. Actor Paul Wesley tweeted, "This is a tweet from the president elect who is upset by a moving speech made at the theater. He is attempting to silence free speech." Ron Howard responded, "Have you read the very respectful words the cast directed toward Mr. Pence? Is that harassment or freedom of speech?"