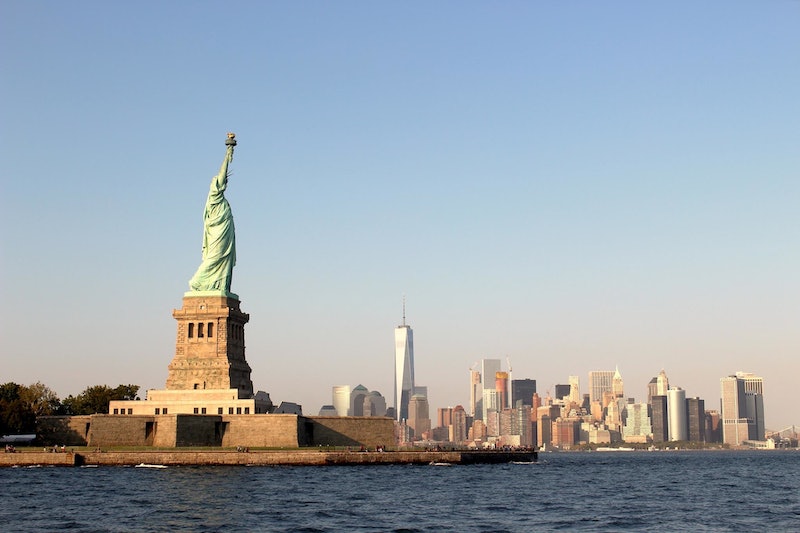 By now I assume we’re all familiar with Donald Trump’s immigration policies — imprecise, economically nonviable, and fluctuating as they may be. At times during the 2016 presidential election campaigns it felt almost as though the Republicans were running three candidates: Donald Trump, his VP pick Mike Pence, and The Wall — a vague, but no less ominous third entity invoked during campaign rallies and interviews that’s metaphorical construction may or may not ensure American safety from Trump’s alleged 2-3 million undocumented gang members, drug dealers, and/or rapists who may or may not actually exist, and certainly don’t exist at such high integers. But just in case you need a refresher, in Trumplandia, Mexico will somehow be forced to finance the brick-and-mortar portion of said wall, although in a recent 60 Minutes interview, Trump also tossed around the idea of “some fencing” and a “digital wall.” His campaign website also proposes an end to “sanctuary cities” — places like New York, Philadelphia, Chicago, Los Angeles, San Francisco, and Seattle — by revoking their federal funding, a move that could cost each city millions, if not upwards of 1 billion dollars a year. That’s federal money designed to go directly towards public health, social services, education, and ironically, law enforcement.

But beyond the dollar signs and literal nuts-bolts-and-cement of Donald Trump’s immigration policies, what has thus far proven most detrimental about the president-elect’s stance on immigration is the racist (and almost always inaccurate) rhetoric he has chosen to describe America’s undocumented population: criminals, drug dealers, gang members, rapists, terrorists, and perhaps most memorably “bad hombres.” It’s the kind of rhetoric that has many immigrants — and OK, sure, citizens who have perhaps never knowingly met an undocumented immigrant before and are now irrationally convinced they live among criminals, drug dealers, gang members, rapists, terrorists, and bad hombres — terrified.

So once again, allow me to make an appeal to fact-based knowledge — the kind we’re becoming dangerously unfamiliar with in this country — by offering you a list of 8 books that will deepen your understanding of immigration in the United States.

Considering that the United States we live in today was literally founded by a group of illegal immigrants who stole land from those already living on it, it’s interesting that the biggest concern in today’s immigration debate is undocumented immigrants. Mae M. Ngai Impossible Subjects: Illegal Aliens and the Making of Modern America traces the origins of America's preoccupation with undocumented immigration, and details the structures put in place: immigration restriction, national-origin and numerical quotas, differential treatment of European and non-European migrants, that have led to an increase in immigrants coming into the United States without visas.

2. Toward A Better Life: America's New Immigrants in Their Own Words from Ellis Island to the Present by Peter Morton Coan

Traversing the last 120 years of immigration in the United States, Peter Morton Coan’s Toward A Better Life: America's New Immigrants in Their Own Words from Ellis Island to the Present offers readers collection of recorded oral histories from immigrants and the relatives of those who arrived in North America via Ellis Island. From interviews with well-known figures, like musicians Emilio and Gloria Estefan, to those with the relatives of Ellis Island’s first immigrant, Annie Moore, this book takes the long view of American immigration throughout the last century, giving a personal face to the politics of leaving home and claiming land elsewhere.

3. The Devil's Highway: A True Story by Luis Alberto Urrea

Luis Alberto Urrea’s The Devil’s Highway tells the story of a group of 26 men and teenage boys who attempted to walk across the Mexican border and through the desert into Arizona. Over half of them — known as the Yuma 14 — died of dehydration, heat, and sun exposure. What they brought with them: favorite belt buckles, small hand mirrors, allergy pills, handwritten letters; and why they fought to get to American in the first place: to earn the money to build a house, to reunite with family already living in the United States, to earn enough money to buy his aging mother new furniture, are facts that tell a different story than the one currently being disseminated by the prospective Trump administration.

4. No One Is Illegal: Fighting Racism and State Violence on the U.S.-Mexico Border by Justin Akers Chacón and Mike Davis

Justin Akers Chacón and Mike Davis’s No One Is Illegal: Fighting Racism and State Violence on the U.S.-Mexico Border challenges the rhetoric that often surrounds anti-immigration policy, changing the narrative that America’s undocumented workers are at best a drain on the economy and social services, and at worst violent and dangerous criminals. They critique the politics and practices of borderland militias like the Minutemen, making a case for fairer, more streamlined paths to citizenship for the millions of people who simply want to make a better life for themselves and their families.

5. Not Fit for Our Society: Immigration and Nativism in America by Peter Schrag

Peter Schrag’s Not Fit for Our Society: Immigration and Nativism in America takes immigration politics even further back than the founding of the United States itself — looking over 300 years back into the ways newcomers to the United States were deemed fit or unfit for citizenship. He explores former policies restricting of Irish, German, Slav, Italian, Jewish, and Chinese immigrants in the context of today’s immigration debate, demonstrating that Latinos and Muslims are simply the next wave of immigrants to be feared and discriminated against. We can’t change our future if we don’t know our history, right?

6. Guarding the Golden Door: American Immigration Policy and Immigrants Since 1882 by Roger Daniels

Taking readers back to the Chinese Exclusion Act of 1882, historian and writer Roger Daniels traces American immigration politics from past to present, exhibiting both America’s generosity to immigrant groups like World War II and Cold War refugees, as well as the often-dehumanizing immigration policies that hinder the basic principles of inclusion and diversity that the United States was founded on. Guarding the Golden Door: American Immigration Policy and Immigrants Since 1882 makes a clear case for removing partisan politics from immigration law, and returning to the values carved on the Statue of Liberty.

7. The Death of Josseline: Immigration Stories from the Arizona Borderlands by Margaret Regan

Another book that comes directly from the front lines of the U.S./Mexico border, The Death of Josseline: Immigration Stories from the Arizona Borderlands begins with the story of 14-year-old Josseline, a girl from El Salvador who became so sick during her journey across the border that she was left alone to die in the desert. Alongside Josseline’s story, journalist Margaret Regan tells other stories — those of immigrants stranded on the border of Mexico, unable to afford the price of crossing nor the cost of returning home, of border patrol agents working in the Arizona desert, and of American activists who traverse the border to leave water and offer what help they can.

Published as part of the Voice of Witness series, Underground America: Narratives of Undocumented Lives is a collection of stories from the lives of America’s undocumented workers, demonstrating not only the challenges of working in the United States without any of the protections legal citizens have, but also of how much this undocumented work force contributes to the U.S. economy. This book will make you rethink every right you take for granted — or didn’t even realize you had until now — as an American citizen.