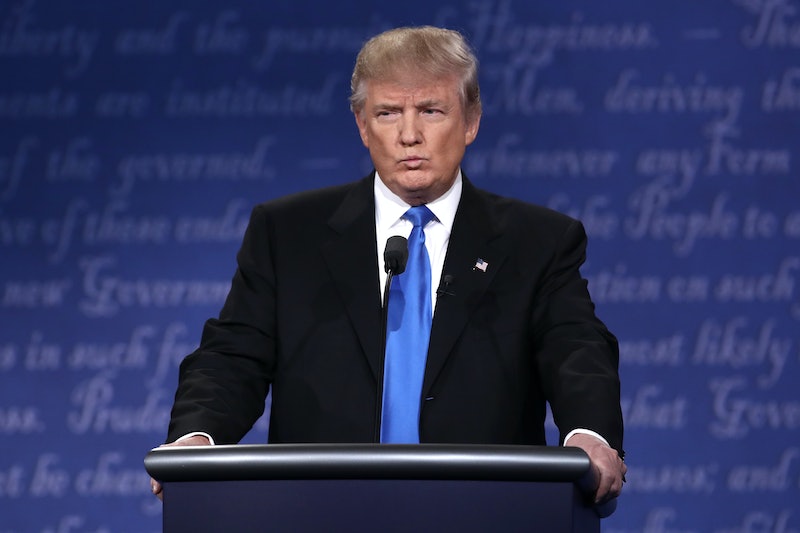 After condemning the Hamilton cast for having "harassed" Vice President-elect Mike Pence by directly speaking to him about their worries of an un-inclusive presidential administration, Donald Trump tweeted that theaters "must always be" safe places. Given Trump's history regarding harassment, specifically sexual harassment, and at least one proven instance of violating a safe place for women, his tweets come off as extremely ironic. It's clear his definitions of "harassment" and "safe spaces" are severely misinformed.

Trump has a long history of allegedly degrading women in his personal life and in professional settings. When pressed on these allegations, Trump usually either denies they ever happened or diminishes their severity. Yet there are multiple proven instances of Trump engaging in sexual harassment. One such instance would be the former Miss Arizona Tasha Dixon's claim that Trump would barge into the women's dressing rooms at the Miss USA beauty pageant. The Trump campaign denied the story, saying, "These accusations have no merit and have already been disproven by many other individuals who were present." But the new president-elect had previously admitted to taking advantage of his position as the pageant's owner to do just what he was being accused of:

I'll tell you the funniest thing is that I'll go backstage before a show and everyone is getting dressed and ready and everything else. And, you know, no men are anywhere. And I'm allowed to go in because I'm the owner of the pageant. And therefore I'm inspecting it. 'Is everyone OK?' You know, they're standing there with no clothes. And you see these incredible-looking women. And so I sort of get away with things like that.

While it may have been "the funniest thing" for Trump, several former contestants in his pageants describe their experiences as uncomfortable. Dixon recalled, "To have the owner come waltzing in, when we're naked, or half-naked, in a very physically vulnerable position and then to have the pressure of the people that worked for him telling us to go fawn all over him, go walk up to him, talk to him, get his attention..."

“I remember putting on my dress really quick because I was like, ‘Oh my god, there’s a man in here,’” said former Miss Vermont Teen USA Mariah Billado. “I remember it shocking me. I barely let anybody except my sister see me getting dressed.”

The concept of safe spaces or safe places is frequently derided in libertarian and conservative circles. Breitbart News, whose former executive chairman, Steve Bannon, has been named as chief strategist and senior counselor for the Trump administration, currently hosts more than eight thousand articles mocking safe spaces, particularly those on college campuses.

After the release of the Access Hollywood tape, which featured Trump's comments about kissing women against their will and getting away with doing "anything" to women (including his ability to "grab 'em by the pussy") because of his fame, his response was to describe it as "locker room talk."

When Megyn Kelly confronted the new president-elect in an interview about having retweeted comments referring to her as a "bimbo" during the campaign, he told her, "Not the most horrible thing — again not politically — over your life, Megyn, you've been called a lot worse, so is that right, wouldn't you say? You've had a life that's not been that easy." Once again, he attempted to diminish the wrongness of his actions by pointing out that others have gone further with inappropriate behavior.

Trump has also refused to backtrack on referring to Rosie O'Donnell as a "fat pig," a "loser," and "a slob." In fact, he doubled down on these comments during the second presidential debate by insisting she had it coming. "I said very tough things to her, and I think everybody would agree that she deserves it and nobody feels sorry for her," he said.

For Trump to imply that Pence was no longer in a "safe place" on Friday night because the Hamilton cast dared to respectfully express their concerns about the new administration, when he has refused to acknowledge his own bullying and harassment of others, is wholly hypocritical. Donald Trump prides himself on "telling it like it is" and not allowing "political correctness" to censor his opinions, yet it appears that even expressing polite disagreement with him or his surrogates amounts to "harassment."

Seems like in Trump Land, it's only harassment when he's on the receiving end.