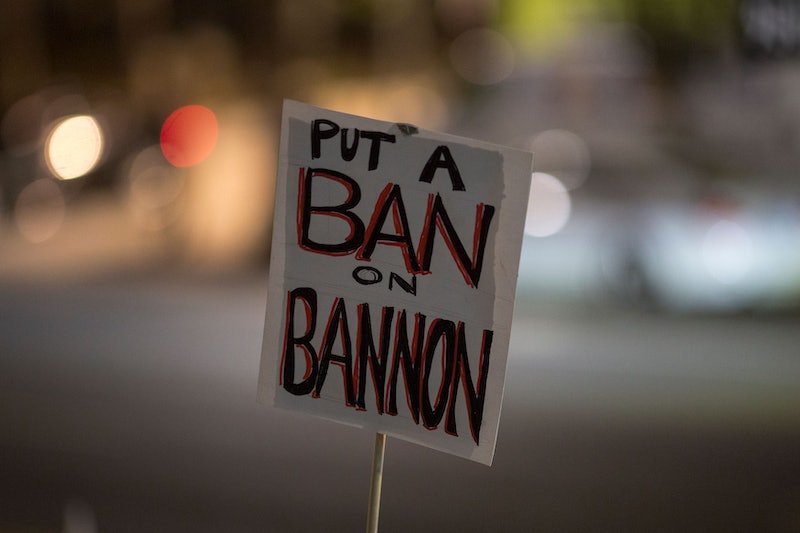 A member of President-elect Donald Trump's White House cabinet compared himself favorably to Satan, and no you are not reading The Onion. I have to be honest, this is a news story I never thought I would write. And yet, here we are. While refuting allegations that he is a white supremacist, Trump's newly appointed chief strategist Steve Bannon name-dropped Satan. Again, you are not reading The Onion. This is real.

"Darkness is good," Bannon told the Hollywood Reporter's Michael Wolff. "Dick Cheney. Darth Vader. Satan. That's power. It only helps us when they get it wrong. When they're blind to who we are and what we're doing."

Wolff noted that he believed Bannon was referring to both liberals and the media in his use of the word "they" in the aforementioned quote.

Bannon's appointment to a senior White House adviser role has raised some serious questions among Democrats, political strategists, and non-profit civil rights groups, concerned about his ties to the alt-right. Along with having served as CEO of Trump's presidential campaign, Bannon is also the executive chairman of Breitbart News, a website that publishes news stories heavily geared at white nationalists.

But criticism of Bannon's controversial appointment extends beyond strongly worded statements and op-eds. Hundreds of demonstrators gathered in Los Angeles, California, and Washington, D.C., earlier this week to protest Bannon's new role. If you're thinking Bannon might have attempted to reach out to those nervous about his future role in Trump's administration, you'd be wrong.

In his first interview since being named Trump's chief strategist, Bannon did little to ease critics' concerns. In fact, you might say he compounded them. Although Bannon dismissed allegations he was a white nationalist —telling Wolff, "I'm not a white nationalist, I'm a nationalist. I'm an economic nationalist," — he seemed to relish the reputation he'd developed for evil among what he called the "donor class" and "the metrosexual bubble." He also likened his new role in Trump's administration to one historical British figure. "I am Thomas Cromwell in the court of the Tudors," he said.

While speaking favorably of villainous characters like Darth Vader and Satan is troublesome enough, Bannon dropped a few more concerning comments in his interview with the Hollywood Reporter:

I'm the guy pushing a trillion-dollar infrastructure plan. With negative interest rates throughout the world, it's the greatest opportunity to rebuild everything. Ship yards, iron works, get them all jacked up. We're just going to throw it up against the wall and see if it sticks. It will be as exciting as the 1930s, greater than the Reagan revolution—conservatives, plus populists, in an economic nationalist movement.

It's worth questioning what Bannon means by "as exciting the 1930s." Adolf Hitler came to power in Germany in 1933. The Great Depression dropped the GDP 33 percent and closed more than 4,000 U.S. banks in 1933. Exciting? Perhaps just for those who identify with the power of "darkness."