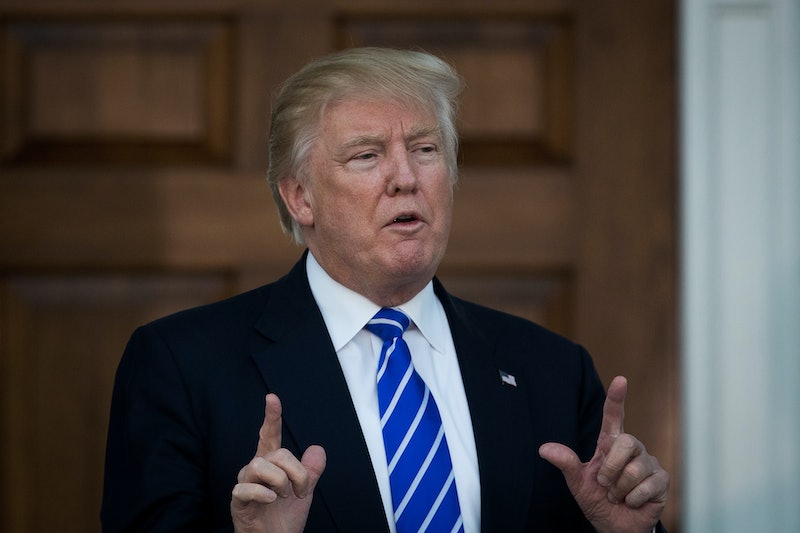 Since Donald Trump won the presidential election last week, there's been a creeping question on a lot of people's minds: is he really going to make it four years at least or eight years at most? Can he actually navigate the confines and legal restraints of the presidency without committing some kind of grossly unconstitutional or impeachable offense? Well, as an illuminating report from ThinkProgress' Ian Millhiser details, Trump could end up doing something unconstitutional on his very first day in office, provided ownership of his new Washington, D.C. hotel doesn't change hands before then.

That's because, as the Washington Post reported earlier this week, foreign diplomats are already speaking anonymously about their intentions to stay at Trump's D.C. luxury hotel in order to curry favor with the incoming president. It's a simple enough notion ― by staying in a Trump property and eschewing his competitors in the industry, any foreign officials visiting the capital have a convenient way to burnish the American president's opinion of them. Here's how one diplomat from an Asian nation put it to the Post.

Why wouldn’t I stay at his hotel blocks from the White House, so I can tell the new president, ‘I love your new hotel!’ Isn’t it rude to come to his city and say, ‘I am staying at your competitor?’

The problem, however, is that this kind of attempt to influence ― a tacit sort of gift-giving ― could well be illegal, a violation of the Emoluments Clause of Article 1, Section 9 of the U.S. Constitution. The relevant portion of the clause states as follows:

... no person holding any office of profit or trust under them, shall, without the consent of the Congress, accept of any present, emolument, office, or title, of any kind whatever, from any king, prince, or foreign state.

Of course, the only way this dilemma could be stopped would be if Trump weren't the owner of a luxury Washington, D.C. hotel, nor the owner of a slew of luxury hotels across the United States. While there's an understandable focus on his D.C. location thanks to its proximity to the White House and central location for foreign officials on state business, it's still a concern in any of the other cities his hotels operate, too. If the White House is aware of a foreign delegation staying anywhere in the United States, then that foreign delegation has a vested interest in seeking out a Trump hotel.

This is just one way in which Trump's countless potential conflicts of interest have been thrust into the spotlight in recent days. It's complicated even further by the fact that his campaign pledge to put his business assets into a "blind trust" seems to have fallen apart ― although he only ever promised to turn them over to his children, which is not how a blind trust actually operates.

Obviously, you shouldn't have visions of an early-term impeachment dancing through your head just yet, because Trump still has time to theoretically clean things up before he's inaugurated, and there'd have to be some pretty severe wrongdoing to spur the GOP-led congress to act against him. But it shouldn't be overlooked that even now, a mere ten days or so after winning the presidency, Trump's position is already setting off alarm bells for ethics experts. That's what you call a bad omen.