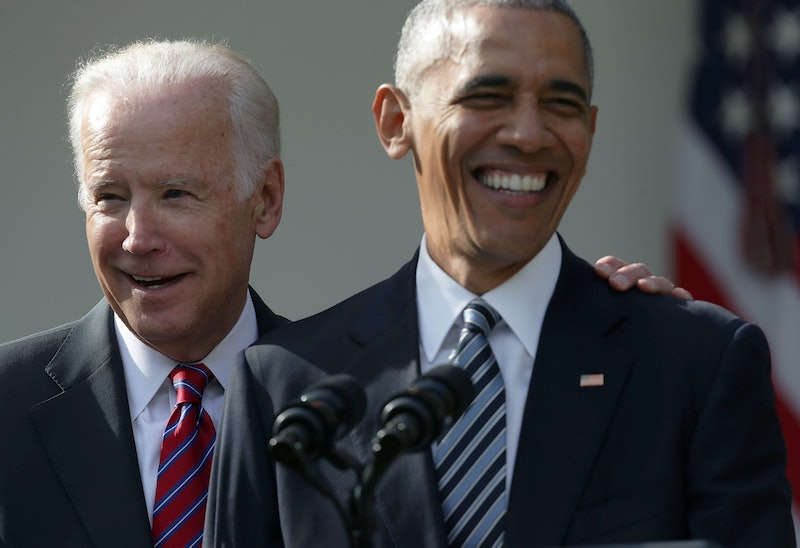 So, look, there's no need to sugarcoat it: Things are looking a little dark right now if you're a political progressive. With the Electoral College victory of Donald Trump meaning at least four years of his incoming administration or at most eight years, and the comparably stable, respectable Obama administration in its final months, there's no shame in admitting you're a little glum right now. But if you're a fan of our inimitable vice president, maybe this will help ― here are some Joe Biden quotes to cheer you up in these uncertain times.

Obviously, it's not as if Biden is just the comedy sideshow that, say, his persona as told by The Onion would suggest ― he's also a man of considerable political longevity, and someone who has managed to resonate with countless Americans by way of his blue-collar aesthetic and unvarnished history of personal pain. That said, he's also one of our less-guarded and more occasionally hilarious vice presidents, so there's no shortage of grin-worthy remarks to choose from.

So, here are seven lines from Biden's tenure as vice president that are bound to bring a smile to your face, whether a smirk or something of the ear-to-ear variety.

1. On The Vice Presidency

When a student at the Harvard Institute of Politics introduced himself to Biden as the student body vice president, Biden's reaction summed up exactly how he feels about being America's number two.

Isn't that a bitch? I mean, the vice president thing.

After British-Russian dual citizen Anna Chapman was arrested and deported for working for a Russian intelligence agency, Biden cracked the following joke to Jay Leno, lamenting that a certain right-wing radio talker couldn't have been kicked out instead.

Let me make it clear. It wasn’t my idea to send her back. I thought maybe they’d take Rush Limbaugh or something, that would’ve been a good move.

Ah yes, those famous words that have reverberated through the years ― when President Obama signed the Affordable Care Act in 2010, Biden took the opportunity to let him know: "This is a big f**king deal."

4. A Better Pick Than Me

Back when he was just a vice presidential candidate in 2008, Biden offered up a glowing review of then-Sen. Hillary Clinton, the sort of vote of confidence that any still-saddened supporter probably wishes they'd heard more people voice in the run-up to Election Day. You have to admire that Biden candor.

Hillary Clinton is as qualified or more qualified than I am to be vice president of the United States of America. Quite frankly, it might have been a better pick than me. She’s qualified to be president. I mean that sincerely, she’s first rate.

5. You All Look Dull As Hell

In 2012, in the spring leading into a long summer of general election campaigning, Biden spoke to a group representing the Turkish and Azerbaijani communities. And in the midst of laying out the administration's long-term view of the two nations, Biden reportedly also paused to take some issue with an apparently dour crowd.

I guess what I’m trying to say without boring you too long at breakfast — and you all look dull as hell, I might add. The dullest audience I have ever spoken to. Just sitting there, staring at me. Pretend you like me!

Clearly Biden had some liquid refreshment on the mind during this 2012 campaign stop in Davenport, Iowa, when he subbed out the name of Scott Community College president Dr. Theresa Paper, in favor of, well, you can probably guess.

7. There Will Come A Day

This one isn't funny, lighthearted, or one of those classic Biden blunders. To the contrary, it's very serious, drawn from a speech that was specifically about how to feel better in the absolute harder times many people will ever face ― the death of a loved one. Biden was specifically addressing the families of slain American service-members, relating with his own story of deep personal grief. If you have the time, you should watch or read the full speech, because it may be the best and most impactful of Biden's entire career.

There will come a day, I promise you and you parents as well, when the thought of your son or daughter, or your husband or wife, brings a smile to your lips before it brings a tear to your eye. It will happen. My prayer for you is that day will come sooner or later.