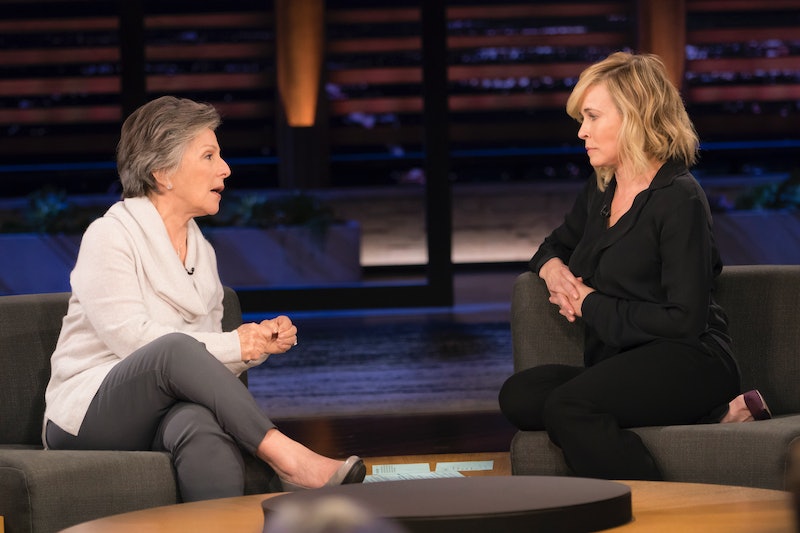 During the May premiere of her new Netflix series, Chelsea Handler vowed to place the 2016 election front and center — and she held true to her word. For the past six months, she's interviewed a wide variety of political experts on nearly every episode and collaborated with Rock the Vote in an effort to galvanize millennials to get to the polls. In an interview with Bustle from the set of Chelsea at Sony Pictures Studios on Nov. 16, Handler reacts to Hillary Clinton's shocking loss to Donald Trump with disappointment, but notes that there are ways to honor the Obamas and Clinton through action and that comedy can provide healing and comfort during a time that's painful for many Americans.

Just several hours after Clinton's concession speech on the morning of Nov. 9, Handler took the stage to film her post-election episode with special guest Senator Barbara Boxer. She had planned on a celebratory episode and says that it was a struggle to readjust the theme while she was still reeling from the election's outcome. "I definitely came in and thought, 'I can't do this today, there's no way,'" Handler tells Bustle. She says her staff reminded her that they and her viewers needed her more than ever, and Boxer was her anchor during the emotional episode.

"It wasn't easy to do, but Barbara was here and she said, 'I cancelled everything today and I didn't think I could come, but I know your audience is filled with young girls. I know your viewership and it's important that you do this today and I will be your anchor.' And she was," Handler remembers. "She kept it together for me because I didn't know how I would. I mean, my face still hasn't recovered from crying so much."

Both Boxer and Handler teared up as they discussed the outcome, but Boxer emphasized the importance of moving forward and not giving up on our country despite this discouraging, painful setback. Handler has embraced her friend's advice and assured us that, despite her previous declarations, she won't permanently relocate to her home in Spain because she has an obligation to use her platform and voice here in America.

Handler says that her show will remain politically-focused and that it's crucial to hold Trump accountable for his actions as president. "We can't normalize this presidency," she says. "We can't ever be complacent and say, 'Well, he's doing a couple good things here and there.' That's all well and good, but this is a man who bragged about sexually assaulting women and that's not a laughing matter," she says, referring to the leaked Access Hollywood tape of Trump talking about groping women which he dismissed as locker room talk.

With Handler's new "Trump Cam" segment, viewers can rest assured that she won't let our president-elect off the hook for any despicable actions during his time as president. But, she emphasizes that we can simultaneously hold Trump accountable and use comedy as a distraction and a way to cope. "Laughter's the only thing that gets us through a time like this," Handler says. "I can't sing, I can't dance — I only have this ability to make people laugh so I want to honor the people who actually find me funny and be valuable to them. It's a way to forget about all the hatred and vitriol and not engage in it. There's a lot of strength to be found in laughter. That sounds corny, but it's so true."

In addition to holding Trump accountable for his actions, Handler is looking to the future and will continue her efforts to get viewers involved in politics — after all, we have midterm elections in 2018 and, once again, we'll have the power to use our voices to shape our country. "We have to get people involved in the midterm elections. We have to make people aware that it's cool to vote, it's cool to get involved politically, and being lazy is really a terrible excuse," Handler says. "Do you ever want to look back at your life and say that you were uninformed? Women fought forever to get us the right to vote and it is sacrilege to not use that privilege and not exercise the right to vote."

However, she cautions those of us who are politically active to be respectful as we try to rally our peers to get out and vote. "Making people feel stupid if they're uninformed isn't the answer," Handler says. "It's up to us to give them guidance and show them how to get information that's easily attainable so they can become excited about getting involved."

This message is so important — during the painful aftermath of this election, it's easy to become angry with people who didn't pay attention or vote in such a high-stakes race. But being condescending will only alienate them, so respectful discussions are the most effective way to get people involved and excited about voting.

Handler is committed to carrying on the good fight and she points out that we owe it to President Obama and Hillary Clinton to move forward. "If we couldn't honor [Clinton] with the presidency, then we need to honor her with action," Handler says. After a painful week, Handler's words reminded me that the answer isn't to flee the country or give up — it's to stand up and keep fighting for what's right and do everything in our power to help those who could potentially be negatively impacted by a Trump presidency. As she says, we all owe it to Obama and Clinton because they've spent years fighting for us and our rights, and it's our time to fight now.