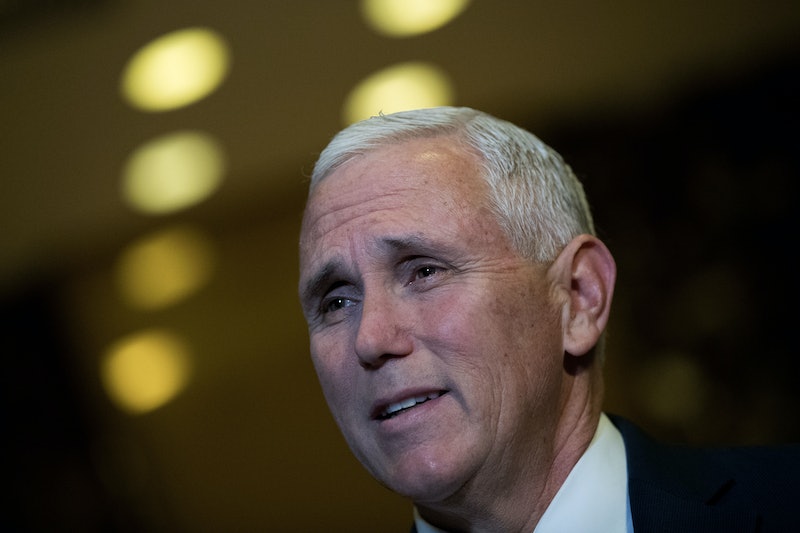 If you were waiting to hear what Vice President-elect Mike Pence had to say about the Hamilton situation, your wait is over. Pence has responded to the Hamilton cast and the olive branch that was extended to him at this weekend's show, and his words may surprise you. According to Entertainment Weekly, Pence was asked on Fox News Sunday whether or not he thought the cast was "rude" to him, as Donald Trump had tweeted. And Pence's answer, in so many words, could be summarized as "no."

In fact, Pence made a point to first address that Hamilton was "an incredible production" with "incredibly talented people" and that it was, for him, "a real joy to be there." But, as for the question at hand? He went on to proclaim that, "I did hear what was said from the stage, and I can tell you I wasn’t offended by what was said. I’ll leave to others whether that was the appropriate venue to say it." It's reassuring that Pence's statement to Fox News Sunday was not about scolding the cast, as Trump has done on Twitter ever since the statement was made.

The main crux of the future Vice President's words on Fox News Sunday, though, was not about Hamilton, but about the election overall. Said Pence,

I do want to say that the basic element, the center of that message is one I want to address. I know this is a very disappointing time for people who did not see their candidate win in this national election. I know this is a very anxious time for some people. I just want to reassure people that what President-elect Donald Trump said on election night, he absolutely meant from the bottom of his heart. He is preparing to be the president of all of the people of the United States of America.

He punctuated that declaration by saying,

...I just want to reassure every American that in the days ahead, I’m very confident they’re going to see President-elect Donald Trump be a president for all the people. We embrace that principle and we’re going to work hard to make that principle every day that we serve.

Perhaps the one of the most interesting parts of Pence's statement was, as EW pointed out, the juxtaposition between his sentiments and that of Trump's recent tweets on the matter. Case in point, Fox News Sunday also asked Pence, "...do you want or expect an apology?" To which the future VP reiterated his "venue" quip, saying, "I would just leave that to others whether that was the appropriate venue for that..."

If you think the situation has made him bitter towards Hamilton, think again. Pence's last words were about recommending the show, proving that maybe this "Hamilton-gate," as Fox dubbed it, could actually be a step in the right direction — as long as Pence and Trump choose to truly listen to the message of the show and its cast members.

More like this
Beyoncé Has Officially Won The Most Grammys Ever & Twitter Is Losing It
By Jake Viswanath
The Beyhive Is Mad At Harry Styles After Beyoncé’s Album Of The Year Snub
By Jake Viswanath
Here’s How You Can Watch The Grammys 2023 In The UK
By Emma Madden and Catharina Cheung
This Girls Aloud x Sugababes Collab Still Hits All The Right Notes
By Sophie McEvoy
Get Even More From Bustle — Sign Up For The Newsletter
From hair trends to relationship advice, our daily newsletter has everything you need to sound like a person who’s on TikTok, even if you aren’t.