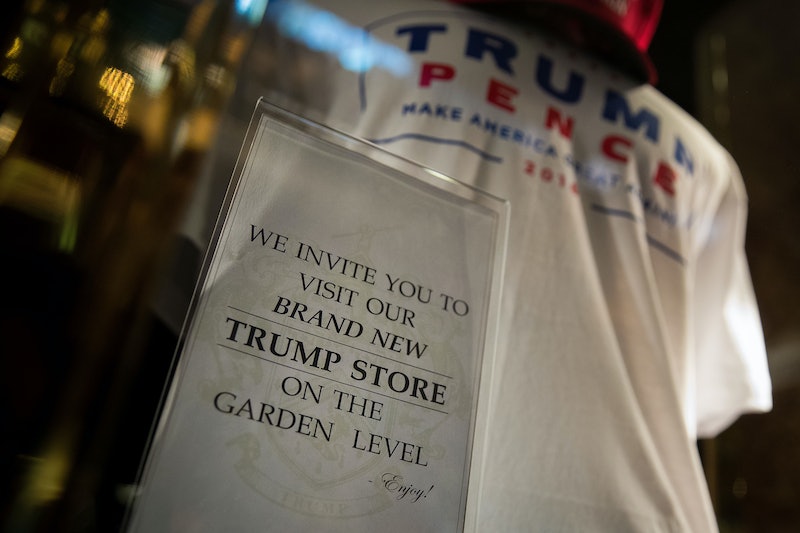 On the campaign trail, Donald Trump vowed to take pay-to-play politics out of Washington. Throughout the general election, Trump characterized the Clinton Foundation's acceptance of donations from foreign leaders during Hillary Clinton's tenure as secretary of State as a prime example of the pay-to-play corruption that needed to be drained from Washington. In the nearly two weeks since Trump secured the electoral votes needed to be named president-elect, however, many voters have expressed concern over Trump's own pay-to-play problem. Although the president-elect's newly appointed chief of staff has said there "wouldn’t be any wrongdoing or ... undue influence,” debate continues over Trump's potential conflicts of interest and whether his foreign business ties may violate the Constitution's emoluments clause.

Due to the scale of his business dealings, the list of Trump's potential conflicts of interest is long. There's the fact that at least one of Trump's companies is indebted to the state-owned Bank of China, spurring questions as to what effect that might have on future US-Chinese trade deals. Or the fact that several other Trump companies operate in countries where diplomatic relations with the United States are sensitive, to say the least (think China, Saudi Arabia). Consider also that Trump is an investor in Energy Transfer Partners, the company currently responsible for the construction of the controversial Dakota Access Pipeline, which has been delayed due to protests.

Additional conflicts of interest include reports that Ivanka Trump — who has no security clearance and is on course to run her father's private business during his presidential term — sat in on a state meeting between Trump and Japanese Prime Minister Shinzo Abe. Concerns the family-run Trump empire might look to profit from Trump's time in the White House are not new, nor are they unfounded. Federal records showed Trump's presidential campaign funneled millions of dollars, nearly one-fifth of his campaign expenses, into companies owned by the Trump Organization. Recently, Ivanka's jewelry company capitalized on her role in a 60 Minutes interview with a "style-alert" promoting the more than $10,000 bracelet (from her own line) she wore during the interview.

Yet Trump claims to have little desire to manage both his businesses and the duties of the White House. "If I become president, I couldn't care less about my company. It's peanuts," he said during a GOP primary debate in January. "Run the company, kids. Have a good time." Yet many have questioned if putting Donald Jr., Ivanka, and Eric Trump — all three of whom serve as members of Trump's transition team — in control of his business empire will establish enough distance between Trump and any conflict of interests his private business assets could pose.

Even Trump has acknowledged that his children controlling his business interests might not be considered a blind trust. "Well, I don't know if it's a blind trust if Ivanka, Don, and Eric run it," Trump said during the sixth Republican primary debate. "If that's a blind trust, I don't know. But I would probably have my children run it with my executives."

However, there is no law that actually forbids the president of the United States from retaining their involvement in their private company. While Title 18 Section 208 of the U.S. penal code forbids federal executive branch employees from having a hand in government matters that they or their immediate family may have a financial interest in, the president is exempt from the law.

Trump's potential conflict of interest become even more convoluted when you consider that Trump's name is his brand and much of his business revolves around his name. While he may be relinquishing control to his children, the fact of the matter is, the name of the next U.S. president will be on a number of buildings hotels, golf courses, and products. According to a financial disclosure form Trump filed during his presidential campaign, of the 515 organizations in which Trump currently holds some kind of position, be it member, partner, director, or president, his name or initials are on more than 300. Going forward, when the Trump Organization does businesses abroad, does the fact that the U.S. president's name is on the building, or that his children are negotiating the deals not amount to added value?

While President-elect Trump is exempt from financial conflict of interest laws, he's not exempt from the Constitution's emoluments clause.

The emoluments clause aims to protect against corruption and influence from foreign powers. It is essentially an anti-bribery clause that prohibits all government officials from accepting anything of value from a foreign government without explicit approval from Congress. This includes gifts from foreign government agents and officials as well as foreign government-owned companies. The clause states, "no person holding any office of profit or trust under them, shall, without the consent of the Congress, accept of any present ... of any kind whatever, from any king, prince, or foreign state."

So, what does that mean for Trump? A Washington Post report recently raised concerns that foreign governments or businesses were already angling to use Trump businesses as a means of currying favor or influence with the new president-elect. According to the Post, roughly a hundred foreign diplomats converged on Trump International Hotel & Tower in Washington, D.C., Friday for what the paper described as "a sales pitch about the U.S. president-elect’s newest hotel." Several diplomats in attendance reportedly likened paying for rooms at a Trump hotel to "an easy, friendly gesture to the new president."

If Trump is not clearly divested of his hotel interests this would likely be considered a violation of the emoluments clause after Jan. 20.

As ThinkProgress pointed out, however, one of the biggest problems with the emoluments clause is enforcement and accountability. It's unclear how foolproof internal safeguards are or whether a rival business would risk suing a conglomerate bearing the name of the president.