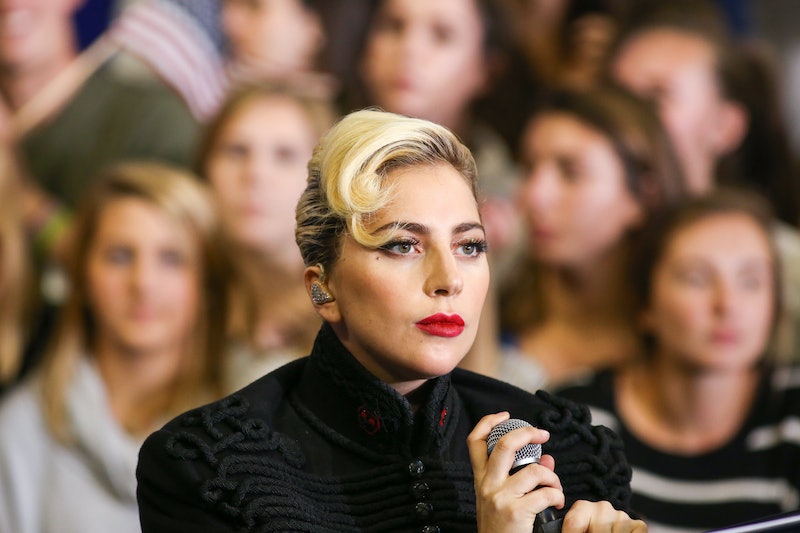 On the surface, Lady Gaga has had a truly solid year — she released her hit album Joanne, she won a Golden Globe for her acting in American Horor Story, and she was nominated for an Oscar for "Til It Happens To You". But in a series of recent Instagram posts, Lady Gaga revealed that she has chronic pain, and due to that, struggles with her life outside of the spotlight. The star posted two candid photos to her Instagram account, which show the location of her pain — her right shoulder — as well as some of the remedies that seem to work for her.

"Having a frustrating day with chronic pain, but I find myself feeling so blessed to have such strong intelligent female doctors," Lady Gaga wrote in the caption of the first photo, which shows her affected shoulder. The most powerful aspect of the image is that when you look at it without reading the caption, her shoulder looks completely normal — and it's a common misconception that pain can always be seen on the surface. According to the American Academy of Pain Medicine, over 1.5 billion people worldwide have chronic pain, which is defined as "pain signals keep firing in the nervous system for weeks, months, even years," and the organization states that people can have chronic pain "in the absence of any past injury or evidence of body damage."

Earlier this year, People reported that Lady Gaga has tested "borderline positive" for lupus, an autoimmune disease. The 30-year-old superstar doesn't specify the origin, timeline, or extent of her chronic pain on Instagram, and she doesn't have to, because that's her personal business. It's remarkable that Gaga decided to share this truthful moment with fans, showing that even super famous and glamorous singers have struggles of their own.

And in Lady Gaga's second Instagram post on the topic, she wrote that she was "so overwhelmed by the empathy, confessions, and personal stories of chronic pain in response to my previous post." She wrote that the outpouring had inspired her to make the second post, in which she shows and details some of her personal remedies for her pain, which includes an infrared sauna, silver emergency blanket, ice packs, and cold baths.

"Hope this helps some of you," Lady Gaga wrote in the caption. "It helps me to keep doing my passion, job and the things I love even on days when I feel like I can't get out of bed. Love you and thank you for all your positive messages."

It sounds like Gaga's powerful posts have already resonated with many fans — and here's hoping they can lead to more open conversations about chronic pain and other "hidden" ailments.