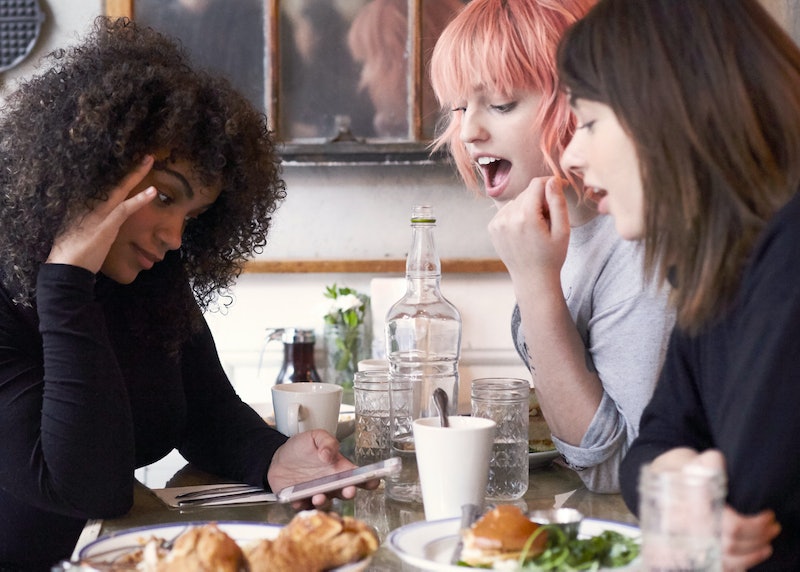 Thanksgiving with your relatives can be hard any year, but election year turkey gatherings are especially challenging. And the 2016 election might be the most divisive presidential race in modern history, so if your typical Thanksgiving meal is wrought with political discussion, plan on it being doubly so this year. Luckily, you aren't alone. People across the country (including me) are already anticipating the kind of, er, Trumped up election rumination that they will experience while passing the cranberry sauce. Here are some arguments that you'll face at Thanksgiving and how to cope with them.

Thanksgiving should be a time for love and togetherness with your family and friends, a day to reflect on the blessings in your life. That can be hard to remember when it feels like certain members are rejoicing a candidate that you would give your left foot not to see in the White House. The most important thing is to try and remain civil, lay off that extra glass of wine and remain cool when the conversation gets heated. No doubt plenty of your friends will have had the same experience, so you can always download later.

I've heard a lot of people turning their post-election analysis not toward Trump, but what they perceive as Clinton's perceived failures as a politician and candidate. You've probably heard some of the reasons, which usually involve the words "email" and "Benghazi," about the woman who President Obama called the most qualified presidential candidate ever.

Clinton supporters have plenty of evidence with which to counter that claim, but it's important to also understand that Trump voters might not necessarily be concerned with how she would have been as a president, but are trying to justify their own vote for the woefully inept president-elect. Try to remember that, in this election, there were many people who had to justify their vote through even the most tepid of arguments.

Oh, this should be a good one. Conservative pundits have, for a long time, pointed out the fact that Trump definitely can't be a racist because he hasn't outwardly declared that he hates minorities. That's not how this works, of course. Implicit bias is absolutely a thing, so when Trump says things like "look at my African American" or "I love Hispanics!" while eating a taco bowl, he absolutely positively being racist, even though it could seem to some like he is celebrating a certain race.

If you hear this, pause and take a moment to understand that not everyone understands what implicit bias is. Many of us were exposed to that in college or through reading, but it isn't a given that everyone understands how these kinds of biases that we are born with can manifest in extremely negative ways. You can try and explain that point to your family, who hopefully won't be so stuffed with turkey that they can't fit in a little knowledge as dessert.

If you ask a Trump supporter why they voted for him, I doubt that they would volunteer "He wants to reinforce white nationalism" as one of his top selling points. And maybe there are people who voted for Trump who even understand the above point about implicit bias. But the fact is, even if they understood that, Trump supporters were willing to overlook his racism for whatever it was that made him their candidate of choice.

In fact, nearly half of America overlooked his racist, misogynistic, and xenophobic rhetoric. And while they themselves might not exhibit those qualities, they were complicit in electing a man who not only embodies those traits, but has whipped up a good chunk of the American population who represent hatred.

So just explain to Uncle John that even if he isn't a racist, he voted for a man who is, and that makes him part of that message. Now pass the mashed potatoes.

This argument is getting weaker and weaker with every cabinet position that Trump appoints. For all of his talk of "draining the swamp," Trump seems to be sticking with the same kind of moneyed political elites he promised he would eschew. Last week, Sen. Elizabeth Warren said that Trump is "inviting the biggest, ugliest swamp monsters in the front door."

So if your family starts in on Trump's perceived ability to shake up Washington politics for good, maybe ask why they believe that people like Rudy Giuliani aren't considered political insiders, or how forcing people on his team to sign agreements that they won't lobby for five years after leaving will do anything but support shadow lobbyists.

5. "He'll Be More Presidential When He Takes Office"

"At the right time, I will be so presidential, you will be so bored," Trump told the TODAY Show back in April. "You will say, 'Can he have a little bit more energy?' But I know when to be presidential." It seems that voters, for their part, believed him, but he's done little to assuage the fears of the people who believe that he has absolutely no qualifications to assume the presidency.

There are two types of "my vote doesn't count" arguers: the people who genuinely feel that how they voted in this election had no effect on the outcome, and the people who didn't vote in the election and are now trying to justify that in some way.

There's probably nothing to be done for the apathetic non-participator if they're a Trump-supporting Republican. The outcome that they wanted still happened without their input. But for any Democrats trying to make themselves feel better, it's important to note that there were a number of states that were expected to go blue that went to Trump this year, which some analysts have said ultimately gave Trump the election. And that goes for second group of people, too. Not showing up to vote can have an impact, so even if the election didn't swing the way that they wanted it to, it's important to remember that.

7. "It Doesn't Matter Who Is President"

Two words: Supreme Court. One of the biggest nail biters in this election was Antonin Scalia's open Supreme Court seat. That's a pretty easy way to demonstrate that, yes, the outcome of the election absolutely can have immediate and drastic affects, but there have been recent developments that make the power of the presidency unprecedented. In their terms in office, both George W. Bush and Obama expanded the executive power that presidents have, scaling back on the checks and balances system we have in the U.S. That means that now, Trump has maybe the most power of any sitting U.S. president.

So, yeah. It does matter who is in the Oval Office.

This Thanksgiving, you may face these arguments — and you may want to argue back — but rest assured that you'll be able to cope.