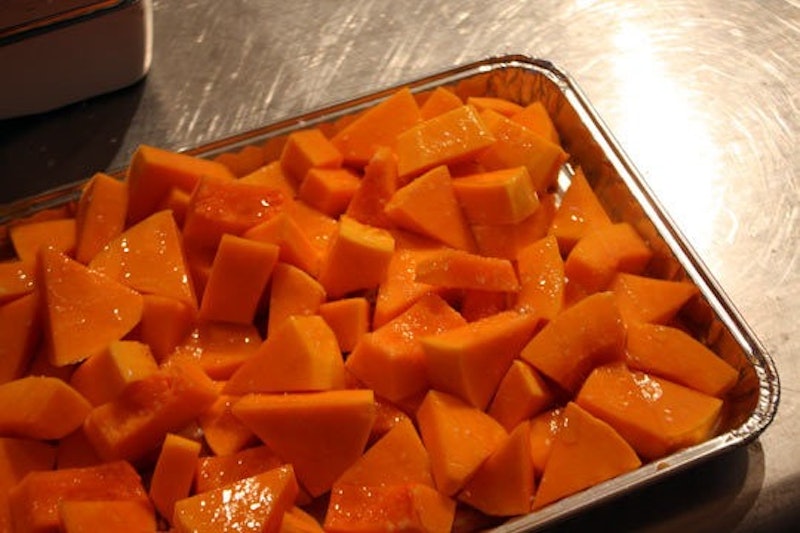 Holidays are big on tradition, and as a result, the Thanksgiving menu is fairly predictable: Turkey (or a turkey alternative), stuffing, vegetables, and of course, every flavor of pie known to mankind. They're classics for a reason — that reason being pure and utter deliciousness — but if you're looking to get creative with your contribution to the table, here's a starting point: Pumpkin pie popsicles.

Let me walk you through the logic here. Pumpkin pie is so closely associated with Thanksgiving that it's hard to imagine the holiday dinner without including the dessert somewhere. Although pumpkin pie probably wasn't part of the first Thanksgiving in 1621, it may have made an appearance of a sort: According to What's Cooking America, early American pilgrims might have stewed pumpkins or hollowed them out to fill with milk, honey, and spices. By the early 18th century, however, they were a staple in New England, where Thanksgiving was quickly becoming an important tradition in the area. (Fun fact: Thanksgiving didn't become an official national holiday until Abraham Lincoln declared it one in 1863.) Fast forward to the modern day, and pumpkin pie is almost as integral to Thanksgiving dinner as the turkey. Almost.

So pumpkin pie is clearly a huge part of Thanksgiving. But if you're tired of the same old desserts making an appearance year after year, why not turn combine everyone's favorite autumnal dessert with something a little more summery?

That's where this recipe for maple and squash pumpkin pie popsicles, featured on The Kitchn, comes in. With just four ingredients, it's super simple, although despite what you'd think, the recipe doesn't actually use pumpkin. The main ingredient is butternut squash; the "pumpkin pie" bit comes from using pumpkin pie spice. The recipe calls for cream, but you could easily experiment with making it vegan if you want.

For that matter, you don't have to use this specific recipe; feel free to do some judicious Googling or come up with your own version. The important part is that barring the appearance of a Thanksgiving burrito, pumpkin pie popsicles are virtually guaranteed to be the most unique dish at your Thanksgiving table this year. I'm not saying it's a competition, but if it happened to be one, you'd probably win. And isn't that what the holiday is all about?

(Update: I have been informed that this is not what the holiday is all about.)

To get the recipe mentioned above, head over to The Kitchn. Happy Thanksgiving!

More like this
22 Movies On Netflix That Are Perfect For The Whole Family
By Bustle Editors
I Tried The $20 TikTok Viral Oishii Strawberries — Here's What I Thought
By Sophie Hanson
Trust Me, Pickle Martinis Are The New It Drink Of The Season
By Emma Carey
On TikTok, A ‘Snackle Box’ Is The Best Way To Pack Charcuterie On-The-Go
By Meguire Hennes
Get Even More From Bustle — Sign Up For The Newsletter