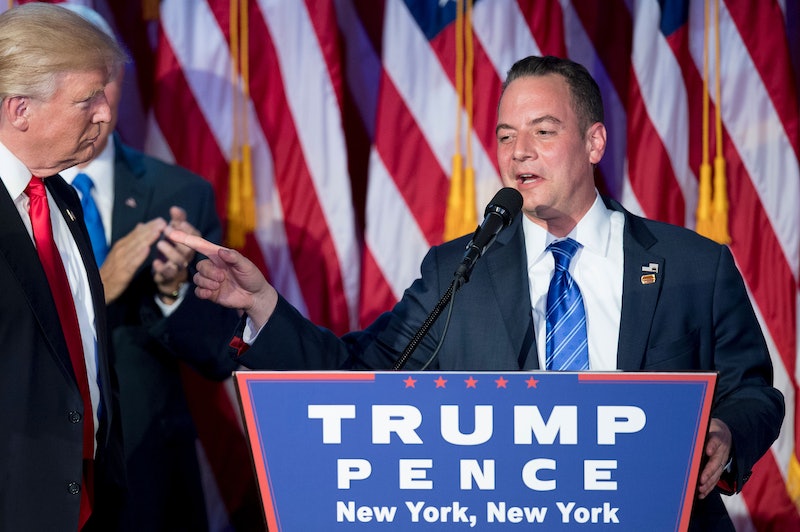 Donald Trump has proposed many odious policies over the last year or so, but his support for a national registry of Muslims is by far one of the most appalling. When asked about the possibility of creating such a database, RNC chair and incoming Trump chief of staff Reince Priebus refused to rule out a Muslim registry, but also said that Trump wouldn’t create a registry based on religion. So, which is it? We don’t know. Like so many Republicans, Priebus refuses to either own or disown Trump’s fascist proposals. It’s a cowardly abdication of duty, both as Trump’s chief of staff and, more generally, as an American.

The prospect of creating a national registry of Muslim-Americans — or, to be clear, any religious group — is horrific. It brings to mind Nazi Germany, which required German Jews to register their property and assets with the government in the years leading up to the Holocaust, and would open the door to mass discrimination against Muslims at the federal level. This, of course, violates the principles on which America was founded, most notably freedom to practice religion.

Trump was first asked about a “database that tracks the Muslims here in this country” about a year ago, and enthusiastically responded that he would create one as president.

"Oh I would certainly implement that, absolutely,” Trump said. Later that month, when Yahoo! News asked him if he supported registering Muslims or, alternatively, requiring them to wear special identification (also a Nazi tactic), Trump responded that “we’re going to have to look at a lot of things very closely.”

On Sunday, Chuck Todd asked Priebus if he would “rule out a registry for Muslims.”

“I’m not gonna rule out anything,” Priebus responded. “But we’re not gonna have a registry based on a religion.”

If Priebus’s second statement is true, then his first statement isn’t. Suggesting that there won’t be a religious registry but also refusing to rule out a Muslim registry makes zero sense, because Islam is a religion. You can’t have it both ways.

But Priebus wants to have it both ways, and that’s emblematic of the GOP’s broader response to Trump. Time and time again, prominent and powerful Republicans have tried to distance themselves personally from Trump’s worst policy proposals while refusing to actually denounce those policies.

We saw this play out long before Trump had even won the Republican nomination. Early in the primary, Ted Cruz was asked about Trump’s then-new proposal to ban all Muslims from entering the country.

“I disagree with the proposal,” Cruz said. “I like Donald Trump.”

That’s a pretty perfect summation of how the vast majority of the GOP has dealt with Trump: Briefly disown the latest disgusting thing he said, but make it clear that in totality, they accept and support Trump. Paul Ryan took this tactic later in the campaign, after Trump said that a judge couldn’t possibly rule fairly on a Trump-related lawsuit because “he’s Mexican.” How did Ryan respond to this?

“Claiming a person can’t do their job because of their race is sort of like the textbook definition of a racist comment,” Ryan said. “But do I believe that Hillary Clinton is the answer? No I do not. ... I believe that [Trump and I] have more common ground on the policy issues of the day, and we have more likelihood of getting our policies enacted with him than we do with her.”

Enacting a Muslim registry is not remotely within the bounds of mainstream American politics, and it will be catastrophic and terrifying if Trump creates one. But enablers like Priebus, Ryan, and Cruz deserve just as much blame here. By continuing to support Trump despite racist policies like this, they’re signaling that, while they might not personally have proposed something like a Muslim registry, they ultimately don’t have a problem with it as a policy.

In totality, this response normalizes something that should not be normalized. The idea that Americans of a certain religious group should be tracked by the federal government is not normal, or acceptable, or something that Americans of any faith, or lack thereof, should be remotely okay with. By refusing to say this when it must be said, folks like Priebus and Ryan deserve just as much condemnation as Trump himself.