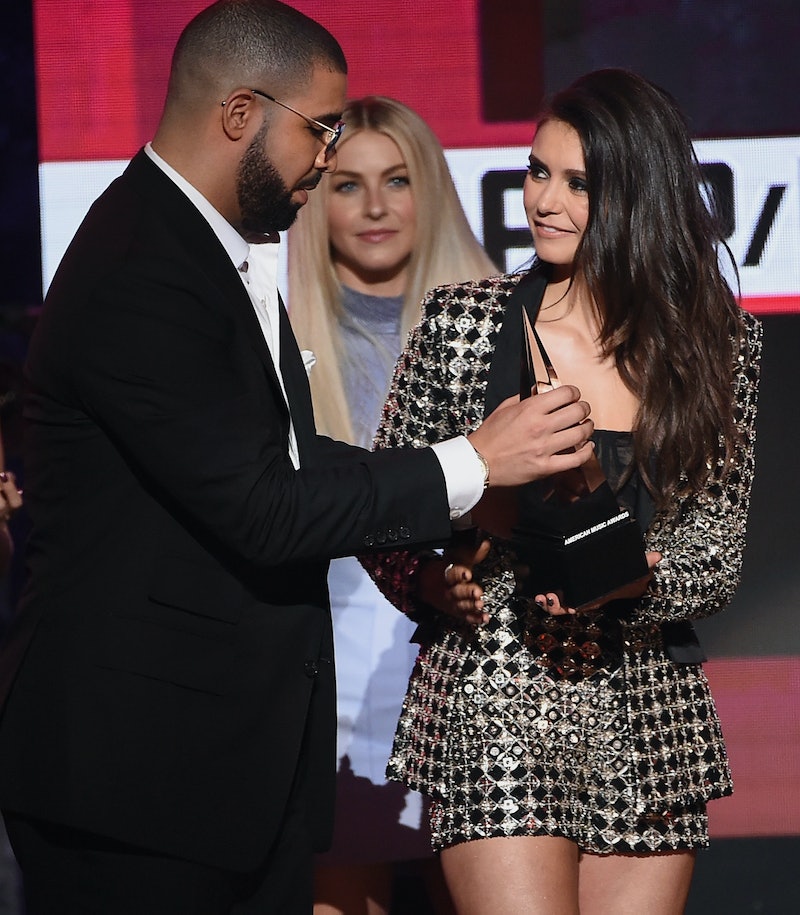 While accepting his first 2016 American Music Award, Drake gave Degrassi a shoutout and praised his former co-star on the show, Nina Dobrev. The actress presented Drake with the award for Favorite Rap/Hip-Hop album at this year's ceremony. As he took the stage, looking fly as hell, one thing became abundantly clear: we were about to witness a one-in-a-lifetime reunion. For those diehard Degrassi fans out there, you'll recall that Dobrev and Drake had starred on the hit teen Canadian drama around the same time, basically meaning that they are totally bonded for life.

Drake did not forget this in his speech. "Me and Nina [Dobrev] were on Degrassi, by the way. [To Dobrev] You've come a long way. Congratulations on all your success." I need a minute. Drake is obviously too adorable to handle and this sweet moment at the American Music Awards nearly sent me over the edge.

I think it's fair to say that Drake is crush-worthy material, a heart throb incarnate. He's often made award show stages the perfect place to proclaim his affections for the women in his orbit. Or did you forget that he was all over Rihanna at the MTV Video Music Awards earlier this year, absolutely smothering her with pure love and basically sending us into an eternal tizzy? Because I didn't forget.

One thing is for certain: Drake is a sensitive guy. It's one of his best qualities. Getting the chance to see him share in his success with a former co-star onstage was just another in what will sure be a long line of occasions the prove this. His comments towards Dobrev are definitive proof, though, that Drake is truly a gift to us all and frankly, I don't know what we did to deserve him. This is your moment, Drake. Bless you now and forever.