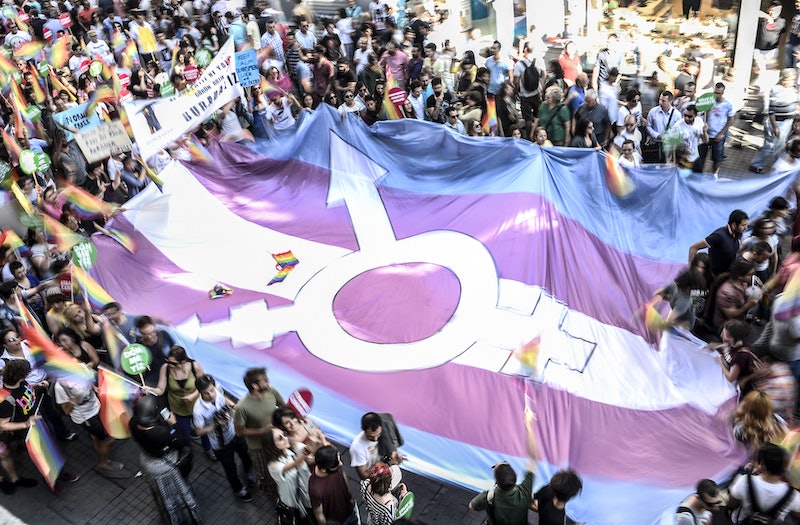 With so many major sociopolitical events happening this November, it's easy to forget that Nov. 1 marked the beginning of Trans Awareness Month. Culminating on Nov. 20, which is the annual observance of Transgender Day of Remembrance, Trans Awareness Month exists to educate people about trans contributions to society, the history of trans people within and outside of the larger LGBTQ community, and to remember the ever-increasing numbers of trans people who have died (most often by murder or suicide) the previous year. These eight essays to read for Trans Awareness Month illustrate the multifaceted experiences trans people have, and can help cisgender people (people who are comfortable with the gender they were assigned at birth) be better allies to the trans community.

The first international Transgender Day of Remembrance (TDOR) took place in 1999 on the one-year anniversary of the murder of Rita Hester, a Black trans woman in Boston whose loss shook the city's local trans and African-American LGBT communities. The Massachusetts Transgender Political Coalition organized its first vigil in Hester's honor, and every subsequent year, the event grew until it eventually became Transgender Awareness Week, which is now contained within the larger Trans Awareness Month.

Below are eight essays, most of which were written by trans people, that illuminate a number of aspects of the trans experience, remind us why TDOR is important, and give excellent commentary on the doubled-down troubles that trans folks will face under a Trump presidency.

The Elephant In The Room: Why So Many Trans Women Of Color Are Murdered

This insightful essay by Joanna Cifredo, a trans policy analyst, explores the question that looms over every TDOR: what cultural factors lead to the murders of trans women of color?

Remembering Isn't The Only Aspect Of TDOR

Written by BuzzFeed columnist Meredith Talusan, this essential essay points out the flaws in merely remembering the dead on TDOR:

But trans people aren't just surviving anymore. When we were less visible and considered mentally ill, remembering those of us who've been murdered might have been enough to make us feel acknowledged. But the intervening years have empowered trans people not just to fight for our basic right to live, but to demand we be treated with the same respect and dignity as everyone else, and to live free from harassment and violence. With our voices resounding more loudly than ever before, TDOR has increasingly fallen out of step with the power our community holds.

Why Being Trans And A Minority Is Doubly Difficult

Important reminders about the unique difficulties that people who are members of both gender and racial minorities face.

Important Information For Trans People On Identification In #Trump'sAmerica

This essay, which is geared towards trans people who are in a position to update their IDs with their correct name and gender marker before Trump's inauguration, points out the potentially grim future for trans people under the incoming administration.

The Intersections Of Being Trans And An Immigrant

This essay by Aisling Fae, a trans Dominican immigrant, highlights one woman's struggles with being both trans and an immigrant within American culture and her queer and trans community in New York City:

Most trans people are discriminated against when it comes to hiring and employment, but trans immigrants are not only matched with the transphobia involved in looking for work but also the struggle of finding work as an undocumented citizen. These restrictions force us into poverty and into dangerous means of survival. Trans immigrants have to turn to sex work, drug dealing, and other high-risk jobs — snubbed by the same Americans who will mourn us after we die.

This photo essay features pictures by Canadian photographer Laurence Philomène as she photographs her friends (all of whom also identify as non-binary) expressing their ideal selves.

Written by Aaron Rose, an educator and activist, this post details the difficulties transmasculine folks experience when going to the doctor for pelvic pain (known in cisgender women as premenstrual cramps), and illuminates a side to one person's trans experience that many people might not have considered.

Looking Towards A Future Of Trans Self-Acceptance

Oklahoma City comedian and writer Amanda Kerri discusses what she hopes for the future of the trans community: that even as the world fights them, they may learn to accept and love themselves outside of a gender binary.

This month, as we remember the 24 trans Americans killed this year and the staggering 295 trans people killed worldwide, me must also remember the living — and fight for their right to be treated equally.