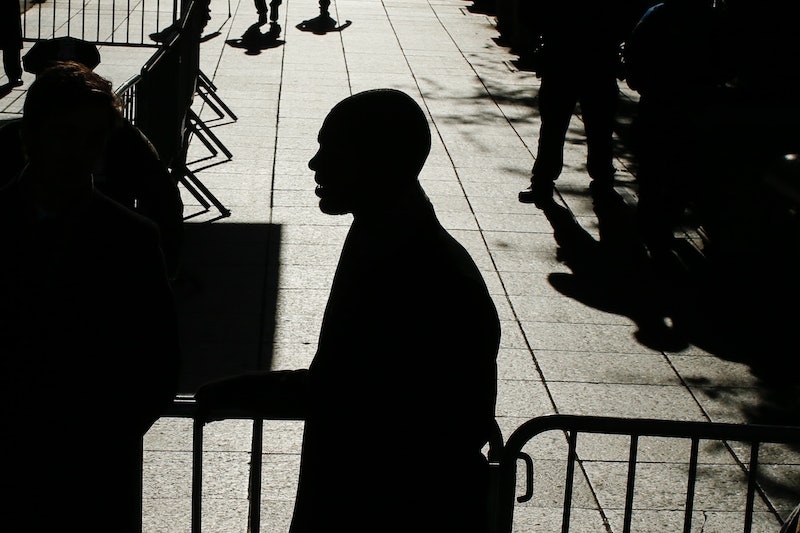 In response to Donald Trump’s alarming suggestion that the federal government compile a database of all Muslims in the country, a New York woman has created a registry for white males instead to make a point. This makes much more sense than a Muslim registry, given that white men commit far more terrorist attacks in the United States than Muslims. However, the most ideal situation, of course, would be to have no registry, as it's a borderline-unconstitutional database that prejudicially targets a subset of Americans.

“Our most immediate threat to domestic security is and always has been white, straight men,” Candace Thompson wrote in a widely-circulated Facebook post. “That is why I have decided to do my part as a Red Blooded Patriot by creating The White Male Registry. It is a simple google form complete with questions that will help identify just how much of a threat to American security any individual white male may pose to the general public.”

The proposal is satire, of course; Thompson acknowledges that it’s an “art project” at the beginning of her post. But it’s an art project that makes a vital point about just how misguided animosity towards Muslims is, specifically with regard to violent crime and terrorism.

Here’s a statistic: White terrorists have killed twice as many Americans since Sept. 11 as Muslim terrorists, according to a 2015 study. According to the FBI, non-Muslims carried out 94 percent of terrorist attacks in the United States between 1980 and 2005. In 2013, more Americans were killed by toddlers accidentally firing guns than by Muslim terrorists.

The disparity isn’t restricted to terrorism, though. According to an extensive Mother Jones analysis, white people committed around 64 percent of all mass shootings between 1982 and 2016, and all but one of those shooters were men. Additionally, about 97 percent of domestic violence incidents are perpetrated by men, according to the Office for the Prevention of Domestic Violence.

The fact of the matter is that, despite what Fox News would like you to believe, the vast majority of terrorist attacks in the United States aren’t carried out by Muslims, and the chances of any given American being killed by an Islamic terrorist are infinitesimal — roughly the same as the odds of being crushed to death by your own furniture, according to 2010-11 data.

“Until January 20th, all white men may voluntarily register themselves,” Thompson wrote of her registry. “Special consideration may or may not be granted to those who register before this date. After January 20th, however, I will be encouraging anyone and everyone to add to the list any non-registered white male they may personally perceive as a threat to their safety.” She added that she’s already added Trump to the registry.

Obviously, any sort of national registry based on race or religion is a bad, dangerous idea. But creating one for Muslims is completely counterproductive to the goal of preventing terrorist attacks on American soil.