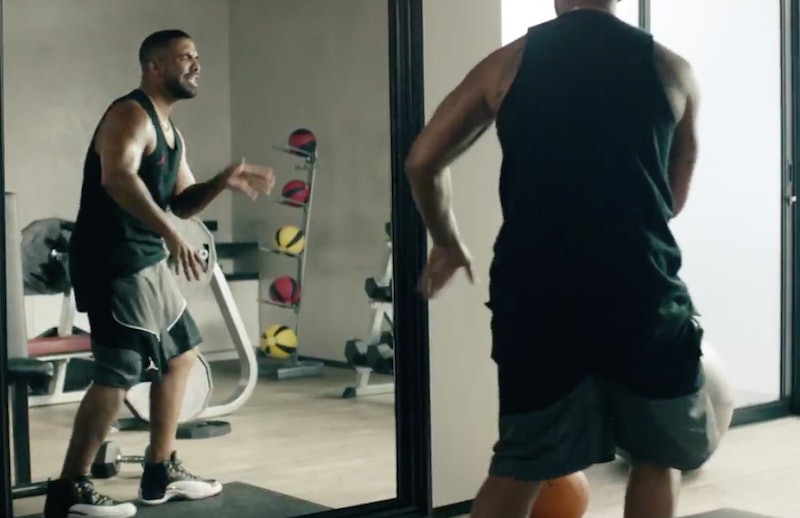 Remember when the world learned that Taylor Swift's gym pump-up song was "Jumpman" by Drake and Future in that Apple Music commercial? Well, it seems like Drake is returning the favor, because Drake sang a Taylor Swift song for an Apple Music commercial that debuted during the 2016 American Music Awards. Specifically, he was singing to Swift's "Bad Blood." If you've seen Drake lately, you know he's been working out, but who would have known that he had such a penchant for pop music?

Swift's commercial featured her rapping on the treadmill to Drake until she fell off, and Drake's new ad spot shows that Apple Music is still, as the commercial says, "distractingly good." In the ad, Drake needs a little more inspiration to get through his lifting, so he puts on "Bad Blood" and spends most of the time in the mirror singing along. It's funny, because that's what I do when I find my sweet spot song at the gym, too. Drake — he's just like us, people.

But going along with the "distractingly good" theme, Drake is so engrossed in singing along to Swift that he just... can't... make his last barbell rep and falls off the bench. Eh, don't worry, Drake. It happens to the best of us.

I personally hate when artists take themselves way too seriously and can't poke fun, so I like that Drake was willing to humiliate himself on national television. Of course, I'm sure his paycheck for the Apple Music commercial wasn't chump change. But he still had to sing into a mirror like a little girl with a hairbrush (or a 29-year-old woman with a hairbrush, not that I would know anything about that). If Drake wants to keep these lip syncing ads going as a series of him going about his day singing songs by Swift and other huge pop stars, I would happily watch them. How about a Rihanna crossover?