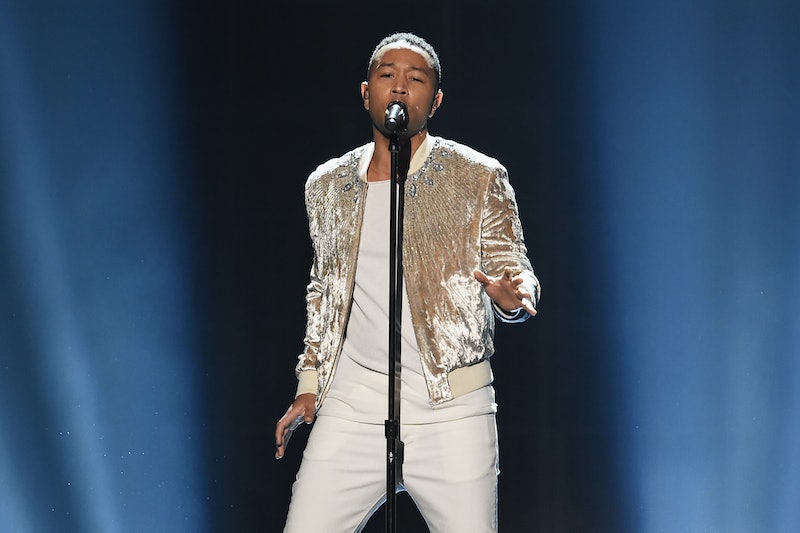 There are so many Teigen x Legend fashion topics to discuss this evening! Chrissy Teigen's 2016 AMAs dress boasted the highest slit, like, ever. It pretty much stole the entire show. But it wasn't the only thing people were talking about in regards to the fashion choices of the model and her husband, singer John Legend. Actually, John Legend's 2016 AMAs performance outfit was a big hit on Twitter in that it generated a lot of chatter and discussion. Legend wore a velvet and bejeweled bomber jacket while performing his latest single "Love Me Now." It was busy and had a lot going on and that is likely why it generated such intense and immediate reactions.

Legend also wore a black and grey blazer on the red carpet at the ceremony, but it was his performance jacket that really set Twitter alight with reactions. It almost detracted from the powerful videos that flashed on the screen behind the singer as he performed the song. There were impactful images of couples of all types kissing and expressing their love for one another.

Let's have a look at Legend's velvet x bejeweled bomber, which he paired with a cream-colored tee and jeans, and then see how exactly the Twitterverse reacted to it.

Legend's jeans have knee holes, giving his ensemble an element of street chic.

The jacket has a champagne-like hue from some angles and a silver shimmer in certain lighting.

The jacket is, well, legendary.

Some fans loved it.