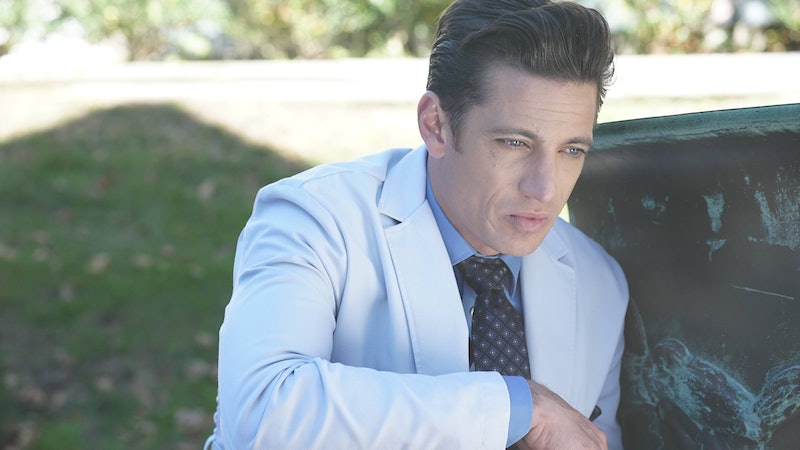 After what seemed like a Jarvis Tetch-free episode of Gotham, I was actually surprised to see that Mario Falcone is infected with the Alice Tetch virus — because despite the fact that he's a doctor, I don't recall seeing him get infected in an earlier episode. However, there was the moment when Jim noticed that Mario had a Band-Aid on his neck. Maybe that was the first clue that once when Mario jumped into the fray to rescue Lee or help Jim with something, he was actually put into the pathway of the virus. Now, he seems to already be in the aggressive, angry phase of the infection, which became obvious when he killed his Court of Owls-sent assailant.

As the show demonstrated with Barnes (who was replaced by Harvey Bullock, hilariously), once someone starts demonstrating symptoms of the virus, it's easy to hide, but it's a steep and quick decline before the infected person becomes lost in their own madness. After an episode or two of having super strength and super rage, Barnes was murdering innocent people and screaming "guilty," so Mario has only a few days left before he's totally reduced to gibberish, and as Lee explained, there's still no cure.

One thing that does make perfect sense is that the target of Mario's fury are Jim and Lee, who, despite their breakup, still can't manage to leave one another alone. This time, Lee is drawn to Jim in order to thank him for saving Mario's life, and, in the process, putting himself in danger. And while the kiss she gives him is mostly chaste, it does hint at a possible reunion between the two after the Mario drama comes to an end.

Right now, it doesn't seem like there's any way that Mario is going to make it to his wedding, because he's in a paranoia-fueled rage over whether or not Lee loves him enough. I don't think the nuances of Jim and Lee's wistful relationship will make an impression on Mario while he's in this state. Hopefully, Jim doesn't mind swooping in to save Lee and the Falcones one last time.