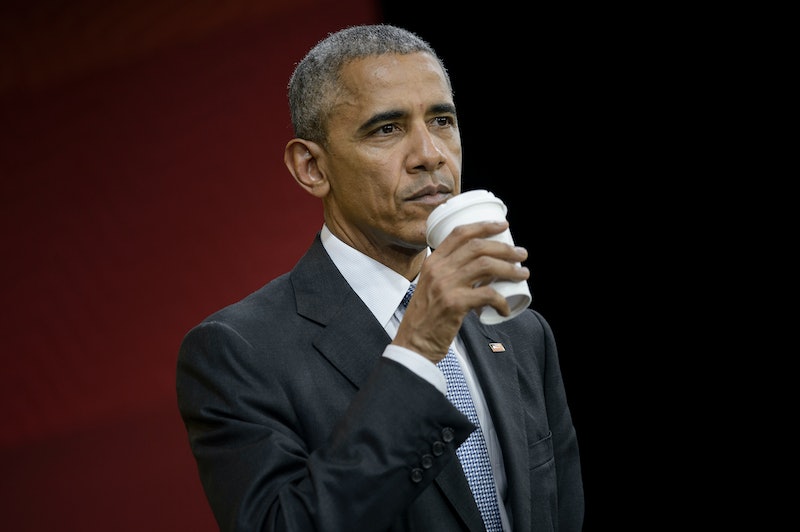 Maybe it was the week in Europe that led to him being more blunt. Or he was just tired from jet lag. But after weeks of carrying out the most gracious response to Donald Trump's win, President Obama may have let slip what he's really thinking. That's right. On Sunday, Obama spoke his mind on Trump while he was in Lima, Peru, at the end of the last international trip of his presidency.

He is there for the Asia-Pacific Economic Cooperation summit, but it was domestic politics that dominated a talk he gave at the Young Leaders of the Americas Initiative, a forum for young Latin American leaders. Obama got off to a diplomatic start explaining that elections are about compromise — "it means that you know, the outcomes of elections don't always turn out the way you would have hoped," he added. He said not to assume the worse about the upcoming Trump administration.

That's the same conciliatory tone that he has been taking since the morning after Election Day. But during a news conference after the talk, he acknowledged more what he's truly thinking:

I want to be respectful of the office and give the president-elect an opportunity to put forward his platform and his arguments without somebody popping off in every instance. As an American citizen who cares deeply about our country, if there are issues that have less to do with the specifics of some legislative proposal or battle, but go to core questions about our values and ideals, and if I think it's necessary or helpful for me to defend those ideals, then I'll examine it when it comes.

That's the first time he has truly acknowledged that he might have to work against Trump and the incoming GOP-led House and Senate about important important, key issues. Surely things like human rights and non-discrimination would get his attention. Less clear is how Trump's views on trade would be countered. That was what Obama spoke largely on at the summit, making the case for open trade that respects the rights of workers and the environment, a similar argument he made while making the case for the TPP — now dead in the water after the GOP win.

Obama was also asked about Trump's likelihood to be a more moderate president than he was a campaigner. "I can't be sure of anything," Obama said. "Like everyone else, we'll have to wait and see." The early indicators have, of course, not been good with Trump's appointments. So far he has appointed ex-Breitbart exec and alt-right guru Steve Bannon in a top role as strategist and Sen. Jeff Sessions as attorney general (a guy who says grabbing genitals is not sexual assault).

Publicly, at least, Obama is generally painting a more hopeful picture by making the argument that real-world realities will force Trump to get it together. "Once you are in the oval office, once you begin interacting with world leaders, once you see the complexities of the issues, that has a way of shaping your thinking and in some cases modifying you're thinking because you recognize this solemn responsibility not only to the American people, but the solemn responsibility that America has, the largest most powerful country in the world," Obama said, before adding there are no guarantees on some of the policies Trump may pursue.

"What I can guarantee is that reality will force him to adjust how he approaches many of these issues," Obama argued. "That's just the way the office works." That would be great — and if not, it's good to know we'll have Obama willing to fight the good fight for at least the next four years.