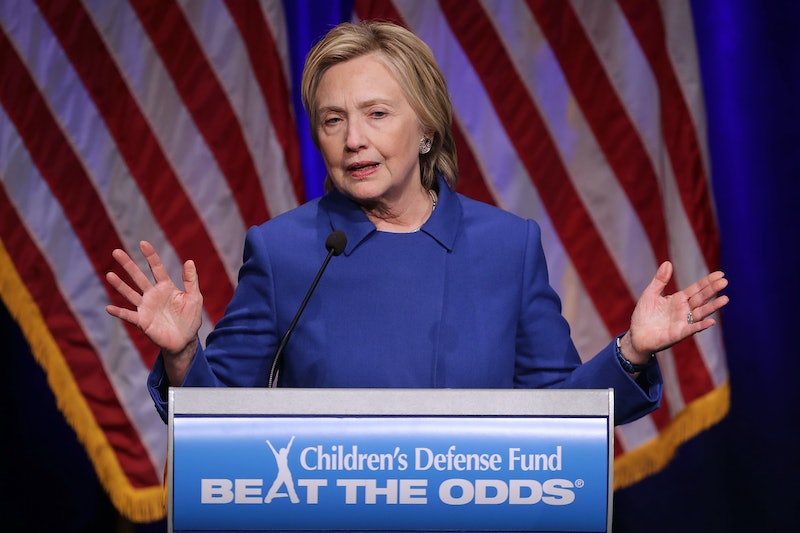 In the days following the election, President-elect Donald Trump's appointments of known xenophobes, white nationalists, racists, and anti-Semites to his administration have justifiably been cause for both fear and outrage. But although it's been less than two weeks since he shocked the country by defeating Hillary Clinton in the Electoral College, many people are already looking to 2020. Now that we know Clinton likely won the popular vote, an important question has resurfaced: Will Clinton run for president again in 2020?

The former secretary of state would be 73 in 2020, which would make her the oldest person to be elected to a first term if she were to win (although, it should be noted, no older than Trump if he were to run again in 2020). Consequently, questions about her health that have plagued her during the 2016 election cycle would likely reemerge in full force, as would sexist speculations about her ability, despite the fact that she would be younger than both Trump and former opponent Bernie Sanders.

However, had Clinton won this year, it is probable that she would have run for a second term in 2020 and had to face those hurdles anyway, so we can't completely rule out the possibility of a third Clinton run. Moreover, Trump confidant Newt Gingrich floated the idea shortly before the election that we could see another Trump-Clinton competition in four years, telling POLITICO that depending on who won, both candidates were likely to run again.

While the question of a 2016 repeat has been on the table for some time, it would be more strategic for the Democratic Party to find a new candidate in 2020. Clinton may not have explicitly ruled out the possibility of a 2020 bid in her concession speech, but given the Democrats' loss of both the presidency and the Senate, it is clear that the party's base is disillusioned and would like to see some concrete progress. The DNC's treatment of Sanders during the primaries did not help the party's case on the left, and Sanders himself has not ruled out a 2020 bid either.

And yet, Sanders helped the Democrats in this way: He spoke to people who felt abandoned by the supposedly liberal party, people who were marginalized across lines of race, gender, and class, and he even got many millennials excited about politics again. Trump's victory, while completely the opposite in terms of whose voices he has amplified, represents a similar anti-establishment, populist attitude that Sanders perpetuated. For many voters, Clinton represented that same establishment that had left them behind, while Sanders and Trump — in many different ways — appealed to people who were tired of the elites in charge.

What's more, while Clinton did win the popular vote, a 2020 run on her part would only solidify in voters' minds that the Democratic Party refuses to change, that it is content remaining moderate rather than shifting to the left. Of course, the questions of whether or not she will and whether or not she should run for president again are different ones, but the implications for both her and her party are significant all the same. After all, Sanders and other progressives have been pushing for Keith Ellison to become the new DNC chair, and the party must continue to change and adapt in other ways, too. Ultimately, the response to a racist demagogue in the White House should not be moderation but rather a renewed commitment to justice.

When we consider all of this, a new dilemma arises: If Clinton doesn't run again, who will? And, more importantly, who could beat Trump if he were to pursue a second term? Sanders is a mild possibility, of course, but so too is someone like Elizabeth Warren, who has long been a favorite among more progressive Democrats. Many Americans have also called for Michelle Obama to run, though she has not previously held elected office, and Clinton's running mate Tim Kaine has been touted as another possibility.

In any case, after the past 500-plus days of the 2016 election cycle, it would be extremely difficult to imagine a repeat in four years, and while Trump was right to say during the second presidential debate that Clinton never gives up, no one could blame her if she decided the best path forward — both personally and politically — would be to pursue avenues other than the presidency.