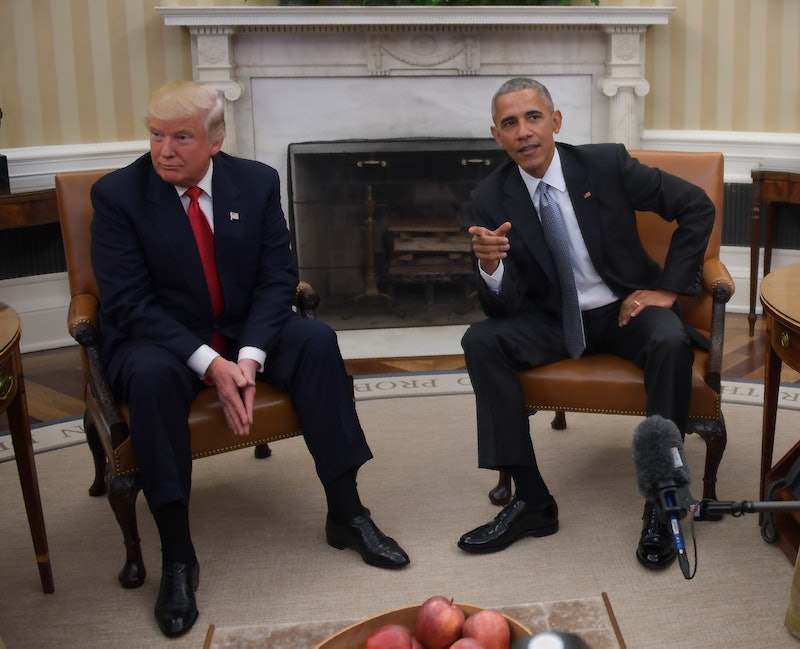 Among those (mostly, but certainly not exclusively on the left) who think that Donald Trump's election is a scary moment for America, there has been an opposition to "normalizing" Trump. The idea is that Trump, due to his mainstreaming of racism and conspiracy theories, obstinate refusal to abide by democratic norms, blatant disregard for the truth, boasts about non-consensual sexual behavior, and attacks on the free press, is not just another president who should be treated in the same respectful and deferential way Barack Obama, George W. Bush, and Bill Clinton were when they assumed the presidency. It is this kind of mentality that has resulted in massive protests throughout the country since the election and the #NotMyPresident movement on social media. Trump, in this view, should be treated by the press and much of the political establishment as a threat to American democracy, not given the benefit of the doubt, and referred to the way we do hostile foreign leaders.

Personally, I think that these concerns hold a lot of weight. Trump is not normal in the context of American politics. In the less than two weeks since he was elected, he has continued to flout political norms in ways that suggest all the fears during his campaign were valid. In 13 days, he has appointed an official with ties to the alt-right, broken norms over press freedoms, paid $25 million to settle fraud charges, and become embroiled in worrisome alleged conflicts of interest.

But if those opposing Trump hope to stop him, whether it be through the 2020 election, stymieing his agenda in Congress, or even impeachment, they will have to do so by lessening his power. And in the American democracy, the biggest source of a president's power that can be actually weakened during their term is their popularity. And the popularity that propelled Trump to the presidency, while historically low for incoming presidents, was not impeded by any of the complete breaks with political norms he made during the campaign.

Trump's use of hateful language was not enough to keep him from the presidency. Nor was white nationalists' embrace of him, or his praise of violence against protesters. So we must unfortunately assume that Trump's latest controversial cabinet appointments or tweets will not convince those who voted for Trump to turn on him. Those who gave Trump the power of the presidency have already normalized his abnormality.

For comparison, it's worth thinking about the most recent president to be impeached: Bill Clinton. Clinton's presidency was threatened after he committed potential perjury in the midst of a legal proceeding related to his sexual impropriety. But despite Clinton being technically guilty of having an affair and being less than truthful, he wasn't kicked out of office, and his popularity soared. The attempts to get rid of Clinton were based on faults voters had already accepted about him beforehand, and therefore did little to sour those who liked him.

If Trump's opponents want to turn his presidency into one marred by unpopularity and possible impeachment, it's important to convince his supporters that there are things he does that are even worse than what they expected. Personally, I think the smartest way to do this would be through highlighting the potential for failures of his populism with Republican policies. But to do so, they must first treat this version of Trump as "normal."