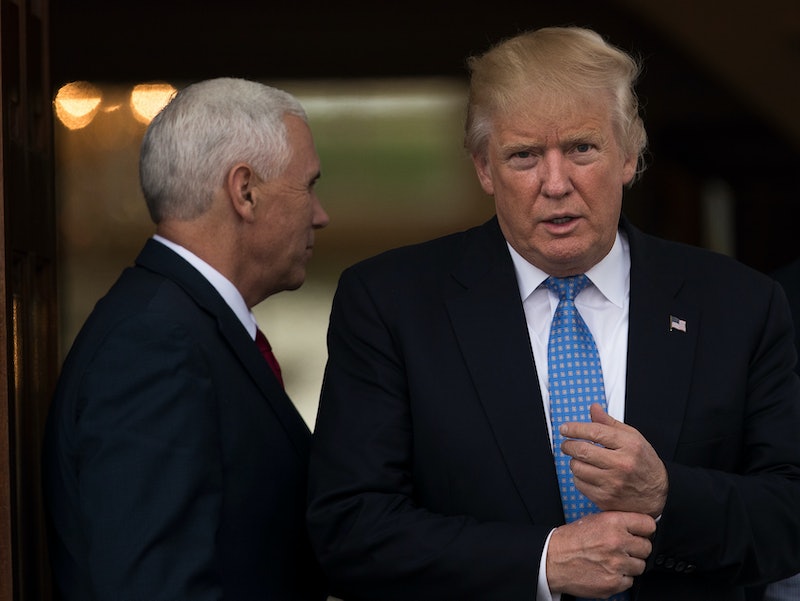 During his extensive campaign, Donald Trump made a lot of different promises, many that hinged on racism, Islamophobia, and anti-immigrant sentiment. In his first 100 days, the president-elect has pledged to undo many of the executive actions taken by President Obama, choose a Supreme Court nominee, limit environmental regulations, and more, but what will Trump do on his first day in office? The list of what he wants to do is quite extensive, and he's released a video detailing what his first days will look like.

Over the course of his campaign, Trump promised that he would do a number of things on Day 1 of his administration, many of which do not require the approval or involvement of Congress. For example, he has pledged to terminate a number of the executive actions put into place by Obama as soon as he assumes the presidency. He has also said that he would start working to protect the Second Amendment, and get to work on an "impenetrable, physical, tall, powerful, beautiful, southern border wall" to fix a border that he likened to Swiss cheese.

The list continues. Trump has stated that one of the first things he would do in office would be to label China as a currency manipulator, though some economists argue that perhaps this proposal is no longer useful given changes in policy. Other things he plans to do on his first day in office include leaving the Trans-Pacific Partnership, repealing Obamacare (or at least asking Congress to do so), and convening top generals in order to stop ISIS as soon as possible.

Trump has also said that in his first hour in office, before starting work on the wall and before anything else, he would begin the process of deporting "criminal illegal immigrants" from the United States. According to Mother Jones, Trump has also referenced plans to "defend the unborn," eliminate "job-killing regulations," get rid of gun-free zones, start taking care of the military, let NAFTA partners know that he intends to renegotiate trade deals, and propose term limits for Congressional officials.

The New York Times, meanwhile, recently reported that Trump also aims to stop efforts to combat global warming and roll back restrictions on energy production, both of which would be a dangerous blow to the fight against climate change. It's unclear how exactly Trump plans to do all of this on his very first day in office when many of those same proposals also constitute his plan for the first 100 days of his administration. However, if he plans to follow through on his threats to dismantle measures pertaining to gun control, climate change, reproductive health, and immigration, we should all be calling our elected officials to make sure they can stop him when possible.