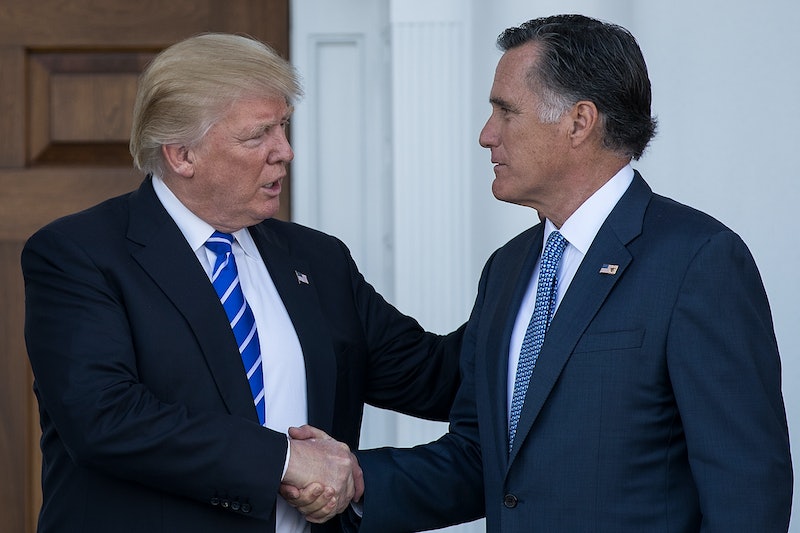 Most of the Cabinet and transition team appointments announced by President-elect Donald Trump have seemed to confirm his detractors' worst fears. His top advisor will be Steve Bannon, the former Breitbart chairman who has been accused of racism and sexism, and his nominee for attorney general is Senator Jeff Sessions, a man previously kept from a judgeship in the 1980s over allegations of racism. After this slew of controversial picks, many moderates were pleasantly surprised by recent indications that Trump may be considering former presidential candidate Mitt Romney for secretary of state.

The two met over the weekend, allegedly to discuss the possible nomination, at a Trump golf course in New Jersey. The meeting came as a surprise to most people familiar with the 2016 election, given that the two men spent much of the past year insulting and criticizing each other. Romney famously refused to endorse Trump, though Trump endorsed Romney in 2012 during the Republican primaries.

"The guy's a stone cold loser, a choker," Trump said of Romney last June, after Romney sharply criticized Trump's campaign for "trickle-down bigotry" — what he saw as racist and misogynistic undertones that would ultimately affect how Americans treated each other at a personal level. Some of Romney's predictions may already be coming true, if the recent spike in hate crimes is any indication. But Romney appears willing to hear Trump out anyway.

Is Romney sincerely being considered for secretary of state, or is the meeting an empty gesture designed to calm critics? Worse, is the meeting merely an attempt to humiliate Romney after Trump's surprising victory? Trump surrogate Omarosa Manigault recently described an "enemies list" compiled by the campaign, and outlets like Mother Jones have described Trump as a man "completely obsessed with revenge," so it seems possible that Trump is only entertaining the pick as a way to demonstrate to Romney that he's in charge. Similarly, Romney may decide he has no interest in working for the man with whom he's traded insults for a year.

However, Romney is apparently on the campaign's secretary of state shortlist, which also includes South Carolina Governor Nikki Haley and retired General Stanley McChrystal. The current frontrunner for the position is apparently Rudy Giuliani, who was an avid defender of Trump throughout the campaign and whose foreign business ties are motivating some to question his fitness for the job.

So could Trump really choose Romney? He's already won some praise even for considering it, and that small amount of good press may be the entire objective behind the meeting. Even if he does hire Romney, though, critics' fears should not be assuaged, considering how we already know with certainty that Steve Bannon and (probably) Jeff Sessions will also be powerful figures in the administration.