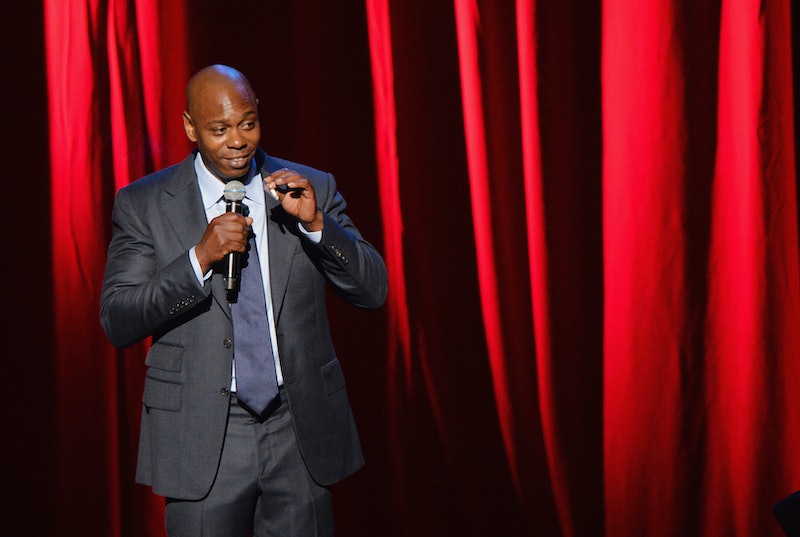 Just when you thought Dave Chappelle couldn't possibly impress you more, I have proof to the contrary. We're getting three Dave Chappelle comedy specials to be released on Netflix. Most comedians would settle for one or maybe two, but that just isn't Chappelle's style, and he's about to remind us of that fact. Like the Beyoncé of the comedy world, Chappelle heard us throwing around questions like, "Is Dave Chappelle coming out of retirement?" and "Will Dave Chappelle maybe release a new comedy special?" and laughed at our low expectations. Then, he bided his time in secret until Netflix dropped the news of all three specials at once.

I was barely hoping for one comedy special, holding my breath in hopes that someone wouldn't offend or disrespect Chappelle and send him spiraling away from comedy again after he whetted our appetite for his comedy with that hosting gig on Saturday Night Live . But he did say upon his return from self-imposed exile that he came back to comedy because he "felt necessary" and needed the time to get his head right. So, it seems like he feels like he's done the latter and has some catching up to do on the former.

Netflix made the announcement of the impending projects on Monday, but provided no additional information as far as when we might be able to expect these little nuggets of magic. Just keep your eyes peeled, I guess. All we know is that they're "coming soon," and, if this announcement is any indication, it will be sooner than any of us are prepared for. There's no rest for the weary or the wicked or the Beyoncé or the Dave Chappelle.

More like this
Here’s Everything Coming To & Leaving Netflix In February
By Jake Viswanath
Twitter Is Mad At The Razzie Awards For Nominating A Child For Worst Actress
By Radhika Menon
This Is When Netflix Is Going To Start Charging You For Sharing Passwords
By Darshita Goyal
Here's How Netflix Should Adapt Prince Harry's Memoir Into A Movie
By Ginny Hogan
Get Even More From Bustle — Sign Up For The Newsletter
From hair trends to relationship advice, our daily newsletter has everything you need to sound like a person who’s on TikTok, even if you aren’t.