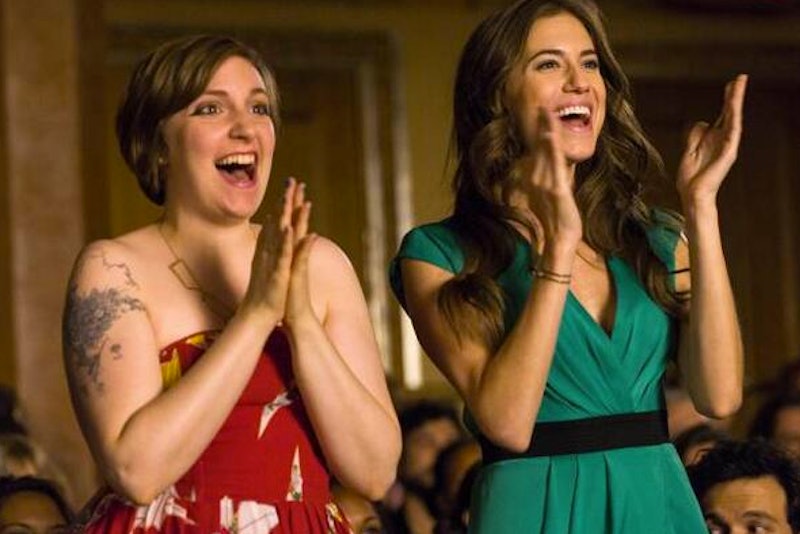 While sometimes female interaction can be a hellscape of spiraling self-deprecation, other times you'll casually compliment an acquaintance's mad t-shirt game, then they'll compliment your mad makeup game, and before you know it, you're standing in the same place you were five minutes ago still mutually reveling in each other's awesomeness. Usually Twitter is a place of the former, but thanks to Lena Dunham and Ilana Glazer, the latter stood proudly, albeit subtly, represented.

It was just a small Twitter exchange (Glazer: "hi @lenadunham u hot b"; Dunham: "@ilazer Hi special friend") but scrolling through a Twitter feed enmeshed in a whole lot of rather depressing crap, Glazer and Dunham were like a beacon of intra-lady show camaraderie, a virtual cuddle session. News? Meh. Adorable? Yes.

Glazer and Dunham both run shows with some very big overlap. Both Girls and Broad City focus on women in their twenties in New York City, experiencing all the awkward things therein (sex, yes, but also other stuff like having to clean pubes out of the shower at your job), with an emphasis on the dynamics of female friendship. As such, there have already been the predictable run of articles pitting the two shows against each other.

But as the coexistence — and co-popularity — of Girls and Broad City proves, while every show on the air is in some ways in competition with other shows of its ilk, this isn't the hunger games. There don't have to be battles, or "feuds." Sometimes, as this tweet puts forth in spirit, there can just be mutual affirmation, pure and simple. Sometimes you just gotta tell your friend she's worthy and/or hot.

More like this
Sandra Bullock, Girlboss Extraordinaire
By Matt Harkins & Viviana Olen
Spice Girls’ Net Worth: The Richest Member Is Wealthier Than The Rest Combined
By Hugh McIntyre
Lydia Leonard Is Setting The Record Straight
By Olivia-Anne Cleary
Long Live Bennifer!
By Allie Jones
Get Even More From Bustle — Sign Up For The Newsletter