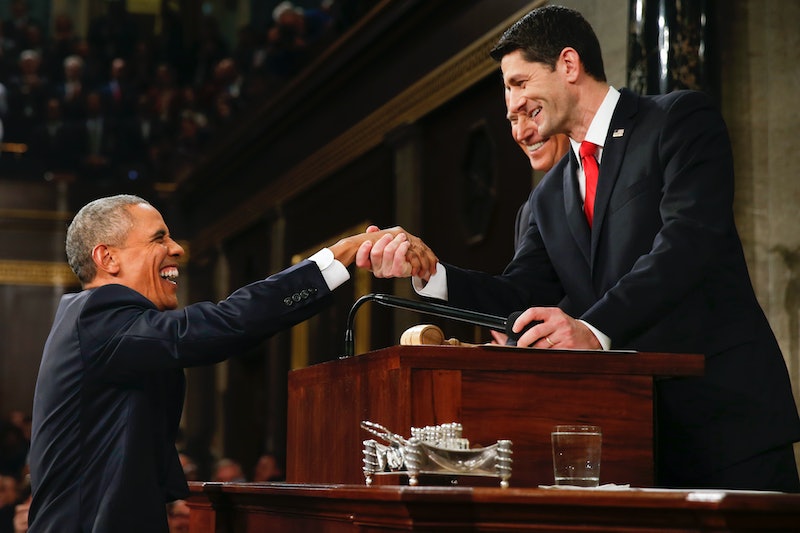 I know, I know — now that Donald Trump is president-elect, it seems like there are hundreds of things people want you to call your elected officials about, from Steve Bannon to Jeff Sessions to the free speech rights of the cast of Hamilton. Some of you may already be familiar with calling representatives, some of you may be out protesting, and some of you may still be anxious about talking to someone on the phone. Either way, you're in luck — you can show House Speaker Paul Ryan that you support Obamacare without leaving the house or talking to anyone over the phone!

Ryan has created an automated survey on his Congressional phone which he plans to use to measure support for the Affordable Care Act. Since Ryan is a well-established opponent of the ACA, it seems likely that he hopes to use the results of the survey to demonstrate its unpopularity. While the ACA does poll poorly with many people, roughly 20 million Americans have gotten insurance as a direct result of it.

If you are one of those Americans, or if you are concerned about a friend, family member, or fellow citizen who relies on Obamacare for insurance, it's very easy to call Congressman Ryan's office to register your support.

If you get a message that the inbox is full or are sent to voicemail, hang up and call back again immediately. The survey was apparently down briefly on Friday, but now appears to be back up and running again.

When you reach the survey, the phone will pick up and you will hear silence for around 40 seconds. Some users have reported up to two minutes of silence. I recommend putting your phone on speaker while you wait. Finally, you will have the option to press "2" to access the survey.

The survey consists of a lengthy explanation of the ACA. Keep in mind that the explanation is provided by the office of a staunch opponent. Other analysts have said the repeal of Obamacare could have devastating effects, with Aaron E. Carroll, Indiana University School of Medicine professor and health policy expert, telling The New York Times that it would be "an unmitigated political disaster."

Lastly, the survey will ask you to press "1" to register your support for Obamacare. If the phone lines are working, the whole endeavor shouldn't take more than five minutes.

Even if you have to wait through silence for a few minutes, here's why I believe it is worth it. The Affordable Care Act allows people with preexisting conditions to get insurance, enables young people to stay on their parents' insurance until age 26, and has caused coverage rates to rise the most amongst immigrants and low-income minority Americans. Certainly, Obamacare is flawed, but I believe those flaws can be remedied without repealing the legislation in its entirety. If you agree, take a few minutes out of your day and call Paul Ryan now.