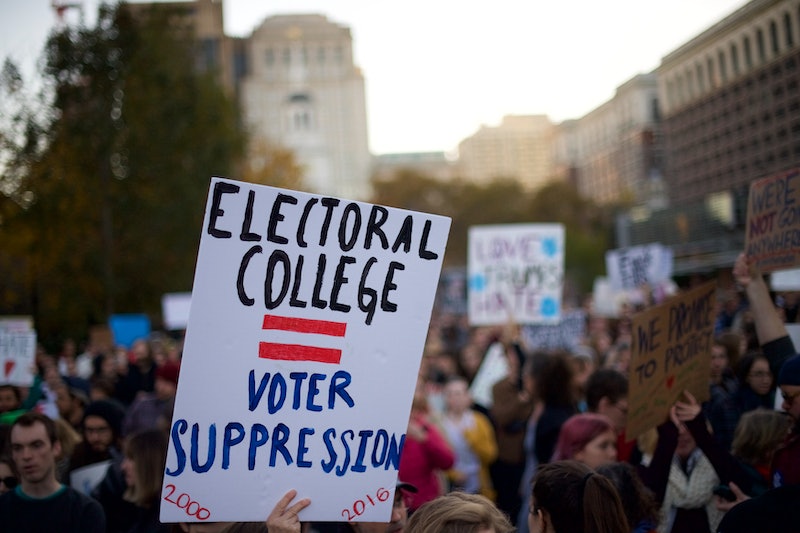 When we vote for governor, senator, congressional representative, or any other local official, the winner of the election is determined by popular vote., meaning that whoever wins the most individual votes wins the race. Fair Vote is a nonpartisan election reform advocacy group that is working to make a national popular vote the way we choose our president, rather than utilizing the Electoral College. Executive Director Rob Richie tells Bustle about the work his group is doing to make this plan a reality.

"Our long term vision, we'd love to see a popular vote for president," Richie said. "At the end of the day, an important barometer of what we want is just a fair presidential election system to pick a president. We think rather than cook up something we don't use for anything else, we should just embrace a national popular vote because popular votes are something we're super familiar with, because we use it for everything else, and it works pretty well. Let's do something that's pretty tested, and leads to candidates trying to get votes everywhere."

So how would this work? Richie says Fair Vote working to get as many states as possible to sign on to an "interstate compact." This agreement would require all of the states involved to vote in a block, and agree to cast all of their electoral votes for whichever candidate wins the popular vote nationwide. The pact would be enacted once the states that joined had a total of 270 electoral votes between them. At that point, the group would control the number of electoral votes needed to clinch the presidency, and would have in effect enacted a national popular vote.

The main complaints recently heard about the Electoral College is that it doesn't give every citizen equal representation, and that swing states get far more attention than any other states. People who live in historically Democratic states like New York, or historically Republican states, like Texas, don't feel that candidates do much to court their vote.

"The march of progress on the National Popular Vote Plan has been important and steady and I think we'll see more next year."

Richie tells Bustle that a national popular vote would change the way candidates campaign and force them to engage the entire country in their quest for the presidency.

"One of the things that I think is hard for people to conceptualize is that absolute cliff you step off when your state goes from being a swing state to a state that the candidates don't think they can win," Richie says. "They just don't do anything."

But how likely is it that this will actually happen? The National Popular Voter Interstate Compact needs to be signed into law in each state by its legislature, Richie explains. Ten states and D.C. are currently on board, and they wield a total of 165 electoral votes. There have been bills in all 50 states, and it has passed chambers in many others that haven't signed it into law yet.

Following the election, people who have been calling for election reform have been largely criticized by the opposition as sore losers, and Richie says that lawmakers are usually very cognizant and cautious of the partisan perceptions advocating for a change like this can have. "It's not easy to pass in a state. You've got to get through all of the committees. You have to get through the chamber. You have to get through any particular person that wants to block it," Richie explains. "There's a lot of partisan fear and concern because it can seem like people are doing it to try to help one party or the other. Everyone is looking at the partisan impact."

FiveThirtyEight's Nate Silver pointed out that the states that have agreed to participate in the compact are the states with the largest margin of Democratic voters. "Here's the problem," Silver noted: "All the states to have joined so far are very blue. Until some purple states and red states sign on, the compact has little in the way of territory to conquer.

Moreover, the way the election broke this cycle, election reform advocates may be hard pressed to convince Republican-controlled legislatures to jump on board. But Richie is optimistic for the future.

"The march of progress on the National Popular Vote Plan has been important and steady and I think we'll see more next year," Richie says. "I think we're going to see more progress, and I think it has a real chance to be in place by 2020."