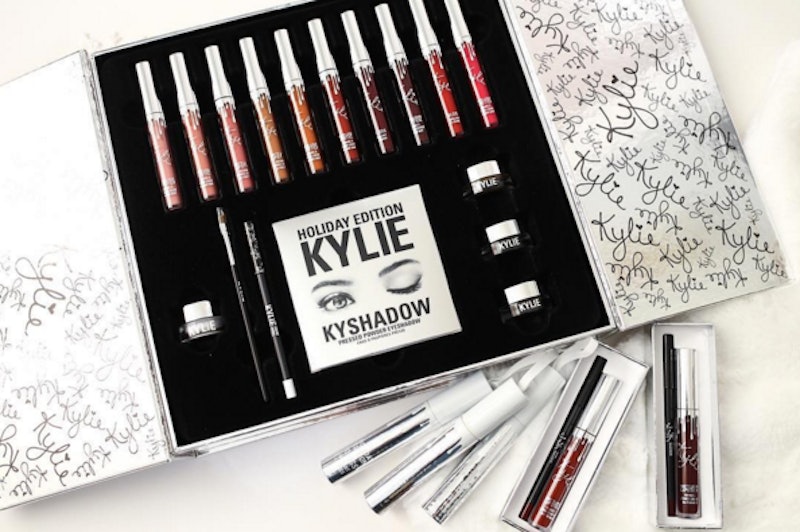 After what has felt like endless teasers on Snapchat and Instagram, the day we have all been waiting for has finally arrived. A Kylie Jenner store is officially opening its doors, and I can barely contain my excitement. If you have been keeping up with Jenner's social media, you've likely seen little bits and pieces of the first-ever store in its design process, but on Monday, the 19-year-old revealed the first photo of the Kylie Cosmetics pop-up, and it will give you all the feels.

It was only about a week ago that Kylie teased several sneak peek photos of what looked like a Kylie Cosmetics store, with subliminal messages via the captions such as, "Soon," and "I can't wait for you guys to see what I've been working on." This was a major hint that something big was coming really soon. Finally, the makeup queen has confirmed our suspicions.

Jenner shared a photo of her first-eve Kylie Cosmetics pop-up shop on Instagram and revealed some information about the launch. The picture shows a giant black and white wall display, with the same liquid drip graphic that is included on all her products. It reads "KYLIE" and 12.09.16 in massive font. Oh. Em. Gee.

Get ready to totally freak out.

It's all really happening!!!

According to a press release, the pop-up will offer a full range of Kylie Cosmetics products as well as holiday exclusives, and will remain open while supplies last.

In this video from her Snapchat, Kylie explicitly says this is her "first pop-up," which likely means there are more to come in the future!