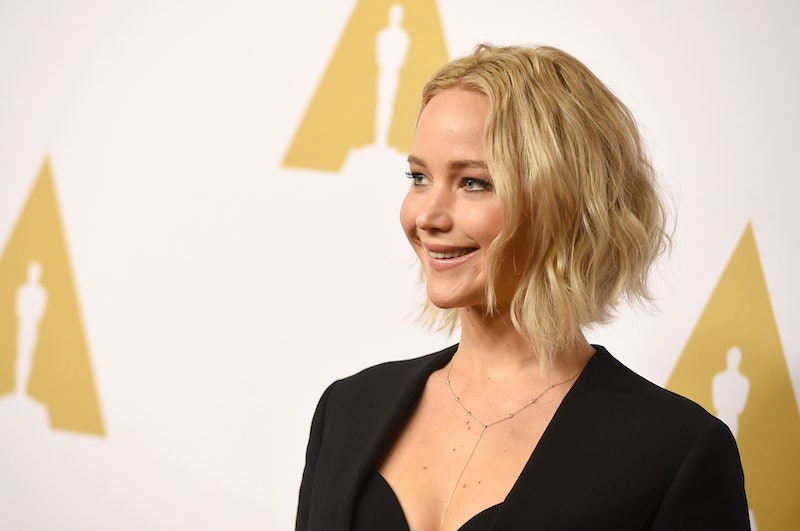 If you search for the person closest to owning the title "most relatable celebrity," Jennifer Lawrence will be high on that list. Throughout her supernova of a career, fans and film audiences have been drawn to her star quality, undoubtedly because of her candidness in nearly every part of her life. Lawrence never minces her words and stands up for what she believes, and it's a beautiful sight to see in a young actor. In her new Vanity Fair cover story, Lawrence revealed how she protects her privacy and her tactic is refreshingly honest, even if it involves a bit of rudeness to her fans. No one ever said that being a celebrity was easy.

Thee 26-year-old is not on social media and Vanity Fair notes that her only official online imprint is her Facebook fan page. She holds her privacy in high regard and said, "I try to just live in a nice little imaginary cocoon." But since Lawrence is such a public figure with her career, she has had to find ways to cope with her public life, which means sometimes she just has to be rude to fans. She told Vanity Fair,

"You might think you know me, but when you approach me you’re a total stranger to me and I’m scared. I get very protective of my space. It took me a long time to be able to do that. But if I’m eating dinner and somebody comes up and a flash goes off from someone’s iPhone camera, I am really rude to that person. Then other people at the restaurant will see and be like, ‘Oh, damn, I don’t want to do that.’"

Although many celebs take a very safe, friendly stance about their fans, I appreciate that J. Law is as open as she is about how overly invasive fans make her feel. She doesn't say she is rude to her fans simply because they want to interact with her, but she makes sure to assert her feelings in these situations, and I admire her for that. Lawrence continued, "Privacy is a full-time job and I work very hard at it.”

Her comment and coping tactic also only highlights how difficult it is for celebrities to maintain their normalcy in the face of (literal) flashing lights. Lawrence is right: a stranger taking a photo of you is actually a very scary experience, and she has a normal reaction to it just as anyone else would, regardless if they were famous or not.

In a time when social media is blurring the lines of privacy, Lawrence has a much more clearly defined line than many other celebs, and obviously knows how to take care of herself above all. In other words, she will be cool with you as long as you don't impede on her during private moments, because that's rude even if she is a celebrity. And she'll call you out on it, too.