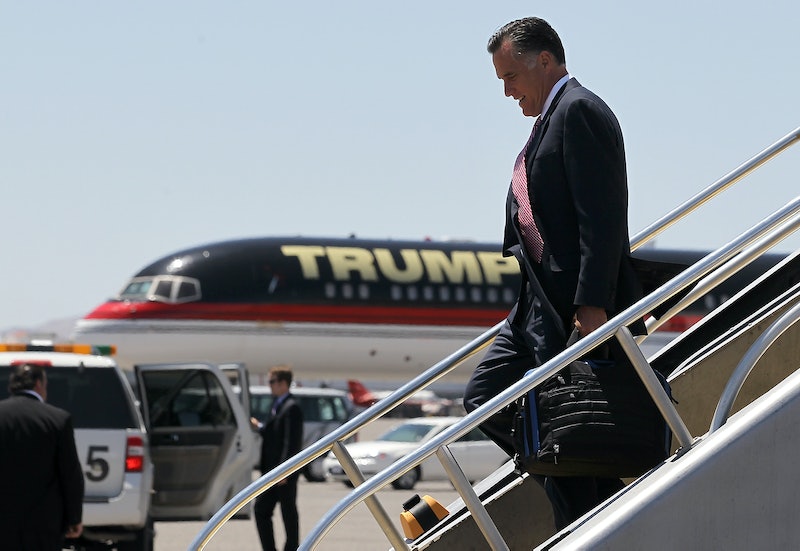 Former presidential candidate Mitt Romney met with current President-elect Donald Trump over the weekend, reportedly, according to multiple news outlets, to discuss the possibility of Romney being nominated for Secretary of State. The news was particularly shocking to many because Romney and Trump spent much of this election season criticizing and insulting one another. Romney refused to endorse Trump, calling him "a phony" and "a fraud" — he even declared, "His promises are as worthless as a degree from Trump University."

Yet, over the weekend, Romney and Trump seemed to have made up, or at least reached an armistice, as they spoke at Trump's New Jersey golf course and discussed foreign policy. While there is no guarantee that Romney would be the ultimate nominee — Trump is reportedly considering many candidates for the Secretary of State position — it does seem likely that Trump is open to working with some people who opposed him during the election.

However, that begs an interesting question: should people who opposed Trump during his controversial campaign agree to work in his White House?

On one hand, working for President-elect Trump contributes to a creeping normalization of his policies and his behavior; on the other, people who work within a Trump administration will be in the best position to soften or oppose would-be policies.

One self-described "national security Never-Trumper," Eliot A. Cohen, wrote in The Washington Post that he did not believe any ordinary conservative should take the risk of working for a Trump administration:

The tenor of the Trump team, from everything I see, read and hear, is such that, for a garden-variety Republican policy specialist, service in the early phase of the administration would carry a high risk of compromising one's integrity and reputation.

The Trump transition team, according to multiple reports, is scrambling to understand how the White House works. The President-elect is arguably the least-qualified person ever to hold the office. In one sense, it would certainly be a very risky gamble to tie one's fortune to Trump's, even now that he's won the election. Worse, his early appointments include an alleged white supremacist (an allegation that the man in question, Steve Bannon, has denied, telling The Hollywood Reporter, "I'm not a white nationalist, I'm a nationalist. I'm an economic nationalist").

Still, working in the Trump cabinet could potentially include working towards the president-elect's most controversial and disturbing goals, including the potential development of a registry of Muslim Americans. It is hard to imagine Romney or any other Never-Trump Republican standing patiently by while these policies are attempted or implemented, if their staunch warnings during the campaign are any indication.

Ultimately, it would be a difficult decision for anyone offered such a job. I think a Never-Trump Republican has sound reasons either to accept or reject a job within the administration, but any who do decide to work for Trump has an obligation to fight against the administration for what they believe.